Does this book have a special meaning to you? i.e. where you found the idea, its symbolism, its meaning, who you dedicated it to, what made you want to write it? 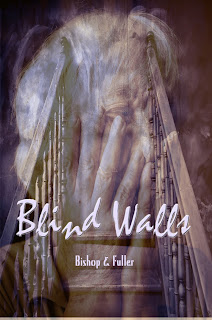 BLIND WALLS was sparked by the “legend” of Winchester House, the enormous San Jose mansion built by the heiress to the Winchester armaments fortune, supposedly guilt-ridden at the millions of dead that made her the money. Our first round with this story was a play we wrote in 1997, which took a different direction, focusing on a young carpenter and his wife whose lives were radically shaped by the old lady’s obsession. This evolved, maybe, from a theme that’s pervaded a lot of our work: the degree we’re forced into serving someone else’s agenda—sometimes a blessing, sometimes a curse. Why that? No knowing, except that we’ve seen it in people we love.

We rarely know, at the outset, why a story grabs us, only that it compels the exploration. The meaning is the sum of what's written, and we have to let the reader decide what that is.

Where do you get your storylines from?
Storylines? From life. A casual bar conversation with a friend, revealing another side of his life. Casually picking up a book. The murder of our babysitter. A tourist brochure. A news item. An impossible parent. Imagining a terrible loss. The greater challenge is finding the form of the story, who's telling it and why, the voice that works best.

Was this book easier or more difficult to write than others?  Why?
BLIND WALLS was easier in one sense, more difficult in another. Based on a play we wrote in 1997, we had the essential story and many of the basic scenes. But the first question you ask yourself is, why explore this story again? You answer that over the course of writing it. And these days, you can get away with lots more stylistic craziness on stage than on the page, so that necessitated finding a style that worked. Which led to a radical expansion of the character of the blind Tour Guide who becomes the “medium” of the storytelling. 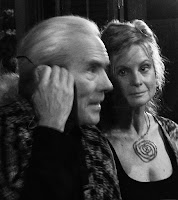 Do you only write one genre?
Unfortunately, no. We’ve never been able to avoid whacking our heads on the slat between pigeonholes. BLIND WALLS involves the “paranormal,” but will disappoint readers intent on card-carrying ghosts.
We realize that lots of readers —like movie-goers, music-lovers, or foodies—really want to know the parameters of what they're entering into. That's why we have genres, franchises, sequels. Nothing wrong with that, and anyone starting out a career should think seriously about the advantages. But we're not starting a career, so we have the mixed blessing of writing whatever hooks us and then floundering around to find who wants to read it. And nothing wrong with that either.

Give us a picture of where you write, where you compose these words…is it Starbucks, a den, a garden…we want to know your inner sanctum?
Where the writing happens? More an outer sanctum than an inner. Our early writing years (in theatre) were snatch-as-snatch-can—moments in between caring for our small kids, thousands of miles in the touring van, rehearsals, performances, not to mention booking tours, writing promo, designing posters or sets or puppets, and eating supper. Now, it’s sometimes in a coffee shop, sometimes at the ocean, sometimes at the library, sometimes in our studio improvising a scene into a recorder, sometimes hunched at the desk with cat on lap.

And finally, of course…was there any specific event or circumstance that made you want to be a writer?
We both grew up loving stories of all kinds. When we started the theatre ensemble that became our livelihood, we had both a necessity to make stories and a venue for telling them. Short sketches became the gateway drug that led to a life of addiction to story. But it was a long time before we thought of ourselves as “writers”—we were just the folks who wrote.