Code Name Trackers: The elite of the elite. FBI agents, each with a secret, an extraordinary ability that defies reason and logic.

An intricate scheme to kidnap the children of high-ranking politicians on Capitol Hill gets disrupted when private investigator Kerry Branson rescues one of the victims.

Teamed with FBI Tracker Ryan Barr, they discover the plot extends to the Office of the President and—the horrific plan has drug cartels and terrorist cells lined up to cash in.

“Then we’re at a dead end unless someone has another idea,” Ryan said.

Kerry’s burner phone rang. “Yes,” and a look of excitement crossed her face as she jotted notes on her pad. “I’ll meet you at the same corner.”

When she finished the call, she looked around the table. “No, we’re not at a dead end. That was one of the prostitutes we met today. Said a gang was in town looking for a kid.” She looked at the pad, “One of them is six-foot, two-twenty, black hair, and a snake tattoo on his arm. I’m headed to pick her up. Who’s going with me?”

Ryan and Adrian looked at each other and nodded. Ryan said, “We’ll both go. Coop, did you get us any weapons?”

“Yeah, in my trunk, along with extra ammo. I wasn’t sure what you wanted, so there is a selection of handguns, rifles, and riot gear.”

Ryan drove Kerry’s truck. Adrian was in the backseat, his feet resting on a case with the weapons pulled from Coop’s vehicle.

Kerry’s phone rang. She listened, then said, “We’re a couple of minutes from you. Walk to the Suds and Bucket Bar. When we get there, get in the back seat.” 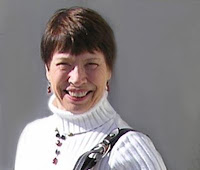 Upon retirement, she became involved in a research project that dealt with the death of a witness to the Kennedy assassination. The research led to her first book, JFK Assassination Eyewitness: Rush to Conspiracy, that details the results of her reconstruction of the 1966 motor vehicle accident that killed Lee Bowers, Jr.
The project jump-started a new career as an author and publisher, and she started a new business: Mystic Circle Books & Designs, LLC.

As an author, her fictional works are suspense/thrillers with a touch of paranormal and romance. Characters with unexpected skills, that extra edge for overcoming danger and adversity, have always intrigued her. Adding an infatuation with ancient myths and legends of Native American Indians, and Scottish and Irish folklore creates the backdrop for her characters.
As a publisher, her diverse background has proven to be an invaluable asset. Assisting other authors to publish their works utilizes the gamut of her experience. Graphics design has become one of her favorite endeavors.

Anita will be awarding a $25 Amazon GC to a randomly drawn winner via rafflecopter during the tour.