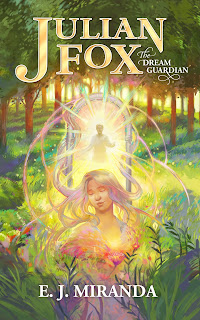 It is said that dreams are just that: only dreams. But believe me, this is not always true. Some dreams are as real as the dreamer.

Thanks to their dreams, dreamers can receive the special visit of eternal wisdom that has inspired the creativity of great inventors, scientists, musicians, and even writers throughout the ages.

This creative wisdom is not always the type that appears to the eager conscience. Sometimes, a Defiler, a destroyer of dreams, is the one who tries to appear before the dreamer. These creatures were once humans, but they allowed their pain and desire for revenge to take over and seek the same miserable fate for the one who dreams.

You must not fear — Dream Guardians, also known as Kelsdrant, will always protect the one who dreams, even with their own life. They are people of flesh and bone, just like you and me, or at least they are on Earth.

The following story is dedicated to the fun, extravagant, and enlightening life of Julian Fox, the Dream Guardian.

Be prepared, dear reader. It is time to dream, laugh, reflect, and even maybe cry.

Welcome to the Land of the Wise Dreams.

This is almost fable-like. I had a hard time getting started. To begin with I thought the switch from Julian and Nicolas (brothers) pulling their ridiculous antics to Julian being in never-never land seemed abrupt, almost jarring. I felt really out of rhythm in my reading for a while but as I continued it seemed to get back in the flow. This is sort of a young people’s romance and a fantasy tale. I’m saying young people not so much because of the fantasy part of the story but because of the crazy pranks pulled between one brother and another throughout the story.

One thing handled really well is the author’s ability to switch back and forth between the two scenes, Often writing about characters moving from one “world” to another can be very confusing, Both the font change and the writing made this quite clear. I enjoyed the author’s human characters more than I did the fantasy ones. I don’t think this is because of any lack of well-defined and well-described characters on the part of the author. It is more that fantasy is not necessarily a genre I enjoy. Not at this stage of my life at least. I’m way too black and white; a practical kind of person, to transport myself to the nether world. That doesn’t mean I didn’t enjoy the book. Just because a book is not necessarily a favorite genre does not mean that we shouldn’t expand our horizons, and this is not a bad one to do just that with.

Chapter 8: The Fate of the Carrier

That night, he locked his door to protect himself from Nicholas’s intentions. He knew his brother was very patient and would wait for the opportune moment to execute the perfect prank.

The occasion was presented that night when the unsuspecting victim, Julian, was asleep since he had to get up earlier than usual. Nicholas could finally do something to torture his brother to compensate for the terrible sushi experience. He dressed in black, wanting to be mysterious like in the movies. He glided silently through the house unseen, even by the discreet service staff. He went to the kitchen where Julian had forgotten to remove the duplicate key to his door from the keychain that contained all the copies of the house’s keys.

Taking it, he went quietly to his brother's room with a small flashlight in his hand. He opened the door quietly, knowing that if he was discovered he would be in trouble. However, his evil desire forced him to move forward. This audacity cheered him on:

“Bah! So what if Mom rips my ears off? At least it is for a good cause.”

His evil plan was to move forward all the clocks in the house by two hours. Thus, the innocent Julian would get up early, sleepy and most importantly, in a bad mood. Julian would need those two hours, just like he had needed the indigestion medicine that his mother had given him to prevent further damage to his body and mind.

One by one, Julian’s watches joined the conspiracy. His own cell phone, all the watches, and the alarm clocks surrendered to Nicholas, the defiler of time.


About the Author: E. J. Miranda is an avid reader, an enthusiastic traveler, and a passionate author. Her great sense of humor and love for nature have granted her a rebellious writing style: Her approach describes the adventures of life but in such a way that each reader can have an individual take on the matter. Her inspiration comes from her curiosity about other countries’ cultures and peculiarities. A few countries in particular that spark her curiosity are Colombia, Italy, Costa Rica, England, Belgium, Mexico, Spain, and the United States. Her favorite places to visit are historical sites and museums, locations that allow her to explore important and even overlooked details. She currently lives with her husband in Colombia but frequently travels to Houston to visit her daughter and son. E.J. Miranda has a degree in tax accounting, but she prefers interacting with people to calculating their taxes.

To learn more about her life and work, visit http://www.ejmiranda.com.