Thank you for letting me stop by today! As part of the research, I visited an artist’s studio. His name was Bill Vann, and he was a legend in the world of commercial art. If you’re over age 30, you’ve probably seen his work without realizing it. Not only was he a master at his craft, but he had a passion for mentoring younger artists and encouraging them along the way—including “writer artists” like me. He was a close friend of the family. I’d known him for almost 30 years but had never set foot inside his studio. That visit was the last time I ever saw him. He passed away unexpectedly 4 months later. So I dedicated the book to his memory.

I prime the pump by brainstorming ideas. Truth be told, I’ve never stumbled on my book ideas that way, but I think it gets my subconscious working 24/7. Eventually, a character or predicament rises up from inside me, and it comes with a knowing that says, “Yes, THIS is your next project. This is what you’re supposed to give the next year of your life to.” 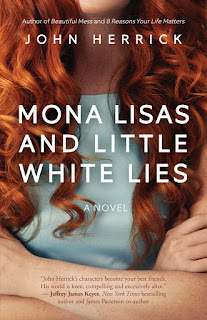 This book was the most difficult for me to write. And the weird thing is that most of my other books are much more complex. Mona Lisas and Little White Lies is a simple, fun romantic comedy. I added depth to the characters, but the story is quite straightforward. Yet every day, it was like pulling teeth trying to get each page written! Some books come quicker than others. And I wrote Mona Lisas a few years ago, when I was stepping into a season that was very gray—a season that ended up lasting several years—but I didn’t know it at the time. In retrospect, the fact that I had such a hard time with writing a simple page should have been my first warning flag.

I’ve written a range of different types of story, from dark struggles in From the Dead and Between These Walls to lighthearted comedies like Beautiful Mess and Mona Lisas. The most important element for me is that the protagonist have an inner struggle, one that allows me to dig deep into their psyche and uncover the golden veins that hide down there. Regardless of the story, readers seem to liken it to something along the lines of Nicholas Sparks, so maybe it’s more consistent that I realize.

I write at Starbucks in the morning! I arrive around 5:30 and plug away for 2-3 hours. I get to watch the sunrise every day and begin each day doing what I love.

When I was 8 years old, I finished a class assignment and looked over at the girl next to me, who was writing a short story. I thought it looked like fun, so I gave it a try. I fell in love with it! From that point forward, I wrote during all of my spare time. By age 10, I’d decided I wanted to write novels as an adult and started trying to do that, but at age 10, you don’t know how to accomplish a long-term goal. So I abandoned the dream—even called the dream dead. But the flicker never fully died. It took me until I was 29 years old, but that first novel came to fruition. Never give up!