This post is part of a virtual book tour organized by Goddess Fish Promotions. DJ Davis and TR Kerby will be awarding a $25  Amazon or B&N GC to a randomly drawn winner via rafflecopter during the tour. See below to sign up for the GIVEAWAY. 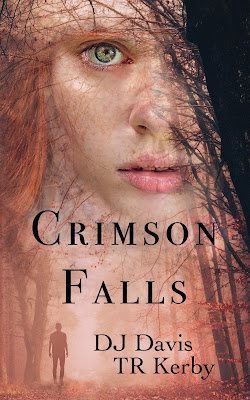 
Sometimes we get ourselves into situations that we never thought would happen. Some of these times turn out to have happy endings; some don’t. What happened to Troyan did not turn out happy. It turned out to be something she never even dreamed could happen. Something she didn’t even know went on.

What would you do if your family were threatened, even your friends? Would you give your life for them? For that matter would you give up the life you expected to lead for them? Probably haven’t ever even had to consider it have you? This is a thriller and a page turner, and I guarantee it will make you think about what you would do.

Both the good guys, Zach and friends, and the bad guys, Rocco and his buds (you gotta have a Rocco as a bad guy, don’t you?) were wonderfully developed here, and there is no question you’ll feel every emotion that Troyan feels. You’ll think her every thought. There was a time I was almost angered that Troyan saw no way out of her life; had no self-worth, but then, I realized this was just two good authors writing well enough to make me feel just what I felt. Well-developed characters and action-packed writing are neither one always easy to create. Both were accomplished in Crimson Falls.

Both authors have published books and I cannot find one with a bad review.

Read an excerpt...
Rocco’s hand slid from Troyan’s cheek to her throat. His fingers dug in on one side of her trachea. His thumb crushed in on the other. “Who takes care of you? Who shelters and feeds you?”

“Rocco.” She drew in a ragged breath. Even his halitosis smelled good on the minuscule amount of air she was able to inhale.

“I always refuse. Do you know why? Because I value you and I don’t want to see you hurt.” He squeezed harder. With his other hand, he unsnapped her slacks and palmed the scars between her navel and her hairline. Nine of them, each two inches long. Stab wounds that were healed now, but still raw and ugly to her. So ugly. His face swirled into black. “Who keeps you from being raped? Who is it that won’t let you be hurt like this again?”

“Rocco Nicotera.” It came out in a croak. She sagged against him’

“Yes.” Everything was black now, inviting swirls of nothing. She barely heard him, as though had stuffed cotton in her ears. “Who owns you?”

She said his name, but only her lips moved. No sound came. He cut off the last of her air.

When he let go she fell in a heap on the floor. She whooped in air that tasted like dusty carpet, but smelled like dry sandy earth and mountain air. The smell of New Mexico. “I want to go home.”

“I’m your home now. And the only way out is death.”

DJ Davis is a Colorado native with mountains in her DNA. She is obsessed with the forests, lakes, and craggy peaks. The rugged high country and rich history of the state set the scene for her stories and provide drama, suspense, and natural beauty. When she's not writing or photographing the wildlife, she frequently disappears into the wilderness with her husband and dogs.

TR Kerby has led a life of high adventure and travel to exotic places…ok, not so much, but she has worn a lot of hats. She has been a fry cook, a trail guide, a horse trainer, and a veterinary technician as well as less other interesting things. Her weaknesses include chocolate and rescuing lost souls, mostly animals, but some sometimes people. She currently lives in the Rocky Mountains with some of her rescues including her husband, two dogs, and a herd of horses. She brings her varied life experience to the table in her books and short stories.