This post is part of a virtual book tour organized by Goddess Fish Promotions. L.M. Pampuro will be awarding signed copies of both Maximum Mayhem and Maximum Trouble. (US only) to a randomly drawn winner via rafflecopter during the tour. 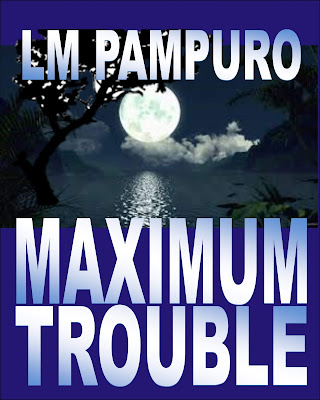 Her relationship with Zack Brady is in undefined territory. The trial of Gert Fountain fades in her rearview mirror.  Needing a break, Maxi Malone tags along with her parents for a well-deserved break on the island of Aruba.


An unmarked war ship sits just off the coast of this tropical paradise. Both tourists and natives are plunged into the deep web of a psychopath’s revenge.

With hostile encounters taking place in U.S. waters, Zack Brady is recruited back into the United States military. As the situation in Aruba becomes more personal, he is dispatched to the island with the sole purpose of saving Maxi and her family.

The only question now is can he get there in time?

My Review
I thought most of this was a page turner. If there was any romance, I must have missed it, but you won’t get any argument from me on that point. Romance is a genre you could leave out for me, or at least use only for a little color. However, there was a lot of suspense, much more my genre. The subject of this story is one that keeps many people from vacationing abroad. Many people shy away from a visit to certain areas or small countries due to the unpredictability of their regimes. This however is a more common story…a beautiful oil rich country with many poor people and others who are greedy. It’s a story that could happen to many. Being in the wrong place at the wrong time.

The story seemed to get bogged down in a few places. I think part of this was difficult because of trying to write a story involving having teams on the ground as well as people to look for. You know how in a tv show battle there are sometimes so many characters and it switches back and forth between them so that occasionally you just aren’t sure who is who? That’s how this struck me every now and then.

However, I never forgot Maxi nor Zack her handsome strong guy coming to save her. I remember her young son; Ric and I remember her brother Pete. Other than that, I can’t remember the names of her mom nor her dad, nor the family of a commander. What I do remember are the names of some of the bad guys.

Does this say something about this book? I don’t think it says anything bad enough not to read it because I didn’t put it down. Sat and read it all the way through, except for maybe a coffee or two. Definitely worth the time.


Read an excerpt...
“Moist droplets of fluid compressed along Zack Brady’s hairline as the reverberation of his work boots clamor against the metal stairs within the tight, dank space. He moved with purpose towards the lit exit sign. With force he thrusted the door. Bright sunlight reflected up across the colossal pavement. The heat hit his body with full force.


Zack put on his aviators and waited a minute for his eyes to focus. To his right a massive military jet saddled up to the hanger he exited. On his left, a field bordered by electric fencing. Totally exposed, his destination lay in front. The two-story brick building with a metal connector to
another hanger. No planes visibly attached. All doors and windows shut tight.

He sucked in a deep breath. On the exhale all his attention focused on the path he considered necessary to take. With shoulders back and head held high, he started to walk in the direction of his objective.”

L.M. Pampuro is the author of six novels: Dancing With Faith, Maximum Mayhem, The Perfect Pitch, Passenger – the only game in town, Uncle Neddy’s Funeral and Maximum 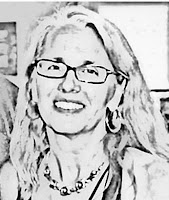 Trouble. (All available at your independent bookseller, Barnes & Noble, and Amazon.com)

She is an avid skier, loves dancing to live music, and possess a warped sense of humor
For more information, please visit www.pampuro.com