Carter Jones is a fairly simple man. He loves his ranch, his horses, and dominating women in the bedroom. He's the owner and founder of the exclusive Cuffs and Spurs Club in Jackson Hole, Wyoming, yet for the past year Carter has achieved something of a monk's status within the ranks of his club. And all because of Jenna, a woman he had an unforgettably sensual week with a year ago, who then vanished from his life without a trace and left him reeling.

When he discovers Jenna practically on his doorstep, Carter moves heaven and earth to draw her back into his life. Only she has a scandalous secret, one that upends his life completely. Can he forgive her for the secrets she kept? Or will the mistrust tear them apart – forever this time?

Email the proof of purchase (receipt or screenshot) to anya@anyasummers.com.

EXCERPT:
Her steps took her away from the main hub of town into the more residential section. Not that Jackson Hole was an overly large city by any measure. It was really more of a blip; the nearest large city was Cheyenne, a few hours south. Not once had she turned or looked over her shoulder in his direction during their trek. It was like she was in her own little world, hefting two reusable grocery bags from Lucy’s Market.

He just hoped like hell it wasn’t a case of mistaken identity.

She stopped at a duplex building. Really, the structure was nothing more than an oversized home that had been split into two residences. So clearly, if it was Jenna, she was living here in Jackson Hole. Why? Not that he would complain if it was her. If it was, he’d be elated about the chance to get some answers. Like why she’d fallen off the face of the earth only to end up in his town. The exterior of the duplex was finished in a deep, dark cherry colored wood, much darker than his ranch house but with the log cabin rustic theme that a majority of the homes in the area tended to have. His intended target climbed the wooden set of stairs, up to the second-floor dwelling.

She was no sooner inside the front door than Carter took the wooden stairs two at a time. When he reached the top, he drew in a deep, calming breath. To be this close after so much despair these past months… This was what he’d been waiting on for almost a year. A chance to see her again, hold her, paddle her fucking ass for ever leaving him and bury his aching cock inside her welcoming heat.

Or he was mistaken and had just followed a strange woman who could have passed for Jenna’s twin all the way home. If so, he would apologize profusely and leave at the soonest opportunity.

He lifted his hand, his fingers curled around the brass knocker and he banged it twice. If it was Jenna, what was she doing here? Why hadn’t she sought him out? How long had she been in Jackson? A myriad number of questions ran through his mind as he waited for her to answer the front door.

Then it opened, the hinges creaking in protest at the movement. Sunlight from the setting sun basked her visage in gold. And the pent-up breath he’d been holding expelled in a rush.

A smile spread over his face and a part of himself that had been missing these long months slid back into place. His eyes roamed over her, drinking in the sight of her standing so close.


AUTHOR Bio and Links:  Anya will be awarding a $15 Amazon or B/N GC to a randomly drawn winner via rafflecopter during the tour. (see below)

Anya is a bestselling and award-winning author published in multiple fiction genres. She also writes urban fantasy and paranormal romance under the name Maggie Mae Gallagher. A total geek at her core, when she is not writing, she adores attending the latest comic con or spending time with her family. She currently lives in the Midwest with her two furry felines.

Visit her on social media here: 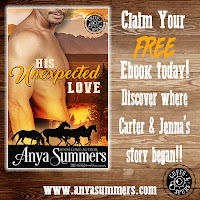 Carter Jones is the owner and founder of the exclusive Cuffs and Spurs Club in Jackson Hole, Wyoming. He's been invited to Pleasure Island, a lifestyle themed resort on a private island in the Bahamas, to experience what the all-inclusive getaway has to offer. His plans for the week include indulging in the finer points of life – mainly sex, and lots of it. He's a man used to dominating a woman in every way imaginable, and then receiving praise and thanks from his selected bed mate for his prowess.

That all changes when he literally runs into Jenna. She's beautiful and headstrong, and turns his world upside down with merely a pout of her gorgeous lips. Lips he can imagine on various parts of his body. Carter devises a plan to claim the feisty woman. But will he be able to keep it strictly physical, or will her surrender to his touch affect him in unexpected ways?

To Master and Defend, Book 2  https://www.amazon.com/Master-Defend-Dungeon-Fantasy-Club-ebook/dp/B01FNG23HI/