Gunfight at the Old Leake Canal

This post is part of a virtual book tour organized by Goddess Fish Promotions. GB Hope will be awarding a $25 Amazon/BN GC to a randomly drawn winner via rafflecopter during the tour. Click on the tour banner to see the other stops on the tour. 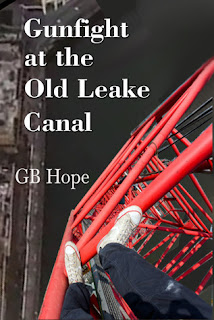 In Liverpool, England, 18-year-old student and Freerunner, Bodie, survives an assassination attempt and flees for his life. His only thought is to secure the safety of girlfriend, Lily, and reach his journalist cousin, Anthony.

Bodie has stumbled into a diabolical plot from the world's governments to end terrorism, famine and global warming in one swift swoop. So begins a race for survival, joined by a variety of other characters, moving from one set piece to the next, as the world that everyone knows is about to change forever.

The weather in Liverpool was absolutely wonderful: wall to wall sunshine, and a refreshing breeze. Feeling the unwanted start of a suntan, Bodie walked onto a supermarket car-park, moving towards the entrance doors, while trying to look as nonchalant as possible. He watched shoppers coming and going with their trolleys. He saw one lady loading the boot of her Audi A3, and veered off towards her. The instant that he saw the keys in the ignition, he was in to the driver’s seat and driving the car away, leaving the woman screaming and running futilely after him. Bodie drove out of the car-park, but the tail-gate was still up and it smashed into the height restriction barrier with a massive crash and a shattering of glass.


About the Author: GB Hope is the author of 11 novels of various genres. He lives in Manchester with his Indonesian wife and their two boys.