This post is part of a virtual book tour organized by Goddess Fish Promotions. Kathleen Rowland will be awarding ten gift bags each containing a shell necklace, chocolates, and a flower pen to randomly drawn winners via rafflecopter during the tour. Click on the tour banner to see the other stops on the tour. 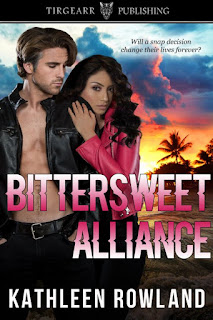 Will a snap decision change their lives forever?

Bizarre kidnappings stun the Big Island of Hawaii, pulling Danker Donahue back into the game and forcing him to partner with Jolene Kualoha, the woman who left him seven years ago when his DNA showed up in paternity lawsuit. The prejudice-motivated hate crimes are the wildest anyone has ever seen. Victims are being poisoned then released once the ransoms are paid, many losing their lives.

In the shadow of Jolene's success as a helicopter pilot, a troubled woman develops a fixation on Jolene and imitates her appearance. Matters turn dark when the copycat is shot dead. Was Jolene the target? Threats mount when she barely survives an accident after her brake cables are severed.

When these crimes threaten her sanity, Jolene is forced to trust the one person she thought she’d lost forever, Danker. Instantly, sparks fly between them, and as much as she wants to rekindle their relationship, she must protect her heart.

An old enemy, Seamus McGinn, breaks out of a maximum-security prison and invites Danker to a meet-up. Surprisingly, the kidnapper joins forces with McGinn along with his sick fans. McGinn trumpets his ‘murders by ice pick’, and it’s up to Danker to stop him. The whole island is on edge with a live feed from the maniac’s website.

In a stolen moment, Jolene shows him hope, and he makes a snap decision that will change their lives forever. Will he make it back to show her?

Older didn’t mean wiser. All this time Jolene had dreaded running into him, sometimes dressing in expectation of it. If she did see him again, she wanted to look good. Today she looked like crap, but what did it matter? Danker’s reason for being on the Big Island had nothing to do with her, not in a personal way. Tomorrow they’d meet at the FBI field office to collaborate on a serial kidnapping case. She’d wear a sleeveless linen dress, open-toed pumps, and bring the accordion file full of notes and newspaper clippings she’d gathered.

The perpetrator targeted wealthy Hawaiians with social capital, the kind of people seen on television or featured in newspapers when they donated money to charities. The latest missing person, Pua Iona, owned Iona Hawaiian Rugs and was an acquaintance of hers. Not that they shared the same social strata, but they’d volunteered together at an artisans’ market to boost Hawaiian crafts. After Pua went missing and fit the criminal’s modus operandi, Mayor Billy Kim, frustrated with police progress, contacted Jolene’s former boss from California, FBI Agent Gary Guhleman, cowboyish in dress but wise in judgement.

Guhleman didn’t need to tell her Hawaiians resisted outside intrusions. “You know everyone,” he’d said. “Witnesses will share what they know.” The agent and his wife had retired, rather semi-retired, here in Kona. Soon after she and Guhleman had spoken, he called in Danker Donahue to consult. “You remember him, right?”

“Gosh, let me think.” She and Danker went hot and heavy after the Long Beach case that ended with the arrest of mobster Seamus McGinn. 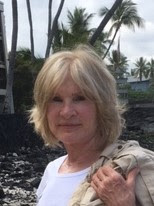 Book Buyers Best finalist Kathleen Rowland is devoted to giving her readers fast-paced, high-stakes suspense with a sizzling love story sure to melt their hearts. Kathleen used to write computer programs but now writes novels. She grew up in Iowa where she caught lightning bugs, ran barefoot, and raced her sailboat on Lake Okoboji. Now she wears flip-flops and sails with her husband, Gerry, on Newport Harbor but wishes there were lightning bugs in California.

Kathleen exists happily with her witty CPA husband, Gerry, in their 70’s poolside retreat in Southern California where she adores time spent with visiting grandchildren, dogs, one bunny, and noisy neighbors. While proud of their five children who’ve flown the coop, she appreciates the luxury of time to write!

What reviewers say about Kathleen Rowland

Windward Whisperings--Kathleen Rowland spins a creative story with romance, passion and suspense making it an adventure hard to put down. The banter she creates between the two lovers is spine-tingling robust in this keeper of a read. ~ http://theromancestudio.com/reviews/reviews/windwardwhisperingsrowland.htm

Deeds of Deceit-- Circled by the bloodthirsty and untrusting, you learn to appreciate the few allies you have. Deeds of Deceit is an excellent addition to any thriller assortment. ~ http://www.midwestbookreview.com/sbw/mar_12.htm


A Key to all that Glitters is a mesmerizing love story that vibrates with love and suspense. ~ http://longandshortreviews.blogspot.com/2009/05/key-to-all-that-glitters-by-kathleen.html