This post is part of a virtual book tour organized by Goddess Fish Promotions. James Robinson Jr. will be awarding a $25 Amazon/BN GC to a randomly drawn winner via rafflecopter during the tour. 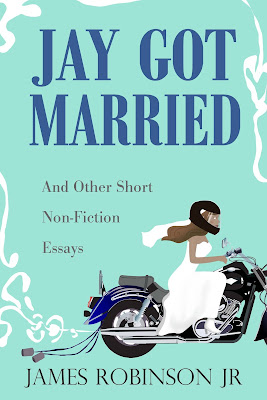 Jay Got Married consists of 9 humorous and, at times, poignant essays chronicling the ironies of everyday life in word and picture. Take for example the lead essay, aptly titled, "Jay got Married," where I find myself mired in a horrendous dream.


In the fantasy, my aging father--dressed in his favorite Champion t-shirt with stains covering the front--marries my wife and I like he did 42 years ago but, this time around, the my 92-year-old ex-clergy dad forgets his lines causing me to coach him through the event with hints like: "ask for the rings, ask for the rings." All the while, my best man sings Sonny and Cher's, "I Got You Babe."


Finally married, my wife and I end the ceremony with a kiss. But as I turn to exit, my eyes catch a glimpse of the bridesmaid who is no longer my wife's best friend but now Gal Gadot from Dell Comics and Wonder Woman Fame. She is dressed in full Wonder Women regalia and looks totally shocked by the whole affair.


My mother turns to my father (now in the audience) with a quizzical look and says, “Dad, look at that bridesmaid. Isn’t that Superman?” She doesn't get out much.


As we exit the church, and the bubbles fill the air--no one uses rice anymore—my wife ignores the limo and takes off on a sleek motorcycle, leaving me in the lurch—hence the cover.


Sure, it's sounds crazy. But, in truth, isn't the world of marriage crazy these days? In my case, what would one do when faced with the prospect of losing their beloved wife after 42 years? At age 67, would they remarry? Would they even want to remarry? These and other marital tidbits are discussed with humor and as much reverence as I could muster.

P.S. The author pairs up with Wonder Woman again in a final bit of photo wizardry Why? How? How are tricky copyright infringement laws avoided? Read Jay Got Married and find out.


I had a frightful dream. I was standing at the altar with my wife and 400 guests in attendance. It seemed to be a repeat of our wedding in 1976. My now 95-year-old father performed the ceremony for my wife and me the first time around, and that’s how old he appeared to be in this vision. He kept forgetting the lines and was forever looking at me for support. At one point, I was whispering, “The rings, the rings.” I kept reaching for them, but they were disappearing before I could grab them.

Albie, my cousin and best man from my first wedding, was singing Sonny and Cher’s, I Got You Babe. Normally, he can’t sing for shit, but in this scenario, he had his hand on his chest and his head back, sounding like Luciano Pavarotti. What was this all about?

My father, the minister, wearing his trademark Champion sweatshirt, with coffee stains on the chest portions, pronounced us man and wife. I turned to kiss my new bride and caught a glimpse of her bridesmaid. But instead of her best friend who was her attendant back in the day, it was Gal Godot from DC Comics and the movies.

She was wearing her Wonder Woman garb, but she didn’t seem primed for a wedding. In fact, she appeared to be totally shocked by the whole affair. What kind of dream was this?

My wife and I ended the ceremony with a kiss. My mother turned to my father (who was then in attendance in the audience) with a quizzical look and said, “Dad, look at that bridesmaid. Isn’t that Superman?”

She was close. She doesn’t get out much.

About the Author
Obviously he has a sense of humor. Read on...


1. Does this book have a special meaning to you? i.e. where you found the idea, it’s symbolism, it’s meaning, who you dedicated it to, what made you want to write it?
I think that this book will go down as my best book (at least my best non-fiction book) because I improved upon my style, humor, and preparation.
2. Where do you get your storyline from?
As a writer of essays, I come up with a germ of idea and the story takes off from there, one idea leading to another. But I sit down with a pencil and legal pad first and brainstorm before I go to the computer and begin to flesh it out. The clipart and pictures of the handsome author that I add to accentuate the points are the fun part. Consider this one: 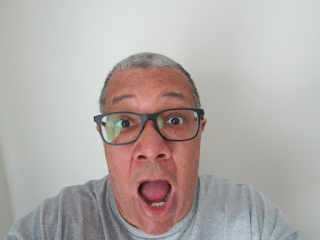 3. Was this book easier or more difficult to write than others?
This book was actually easier to write than others because of the experience that I have gained from writing three books of nonfiction and because I have good editors who I have learned to trust their input.
4. Do you only write in one genre?
No, I have written three fiction and three non-fiction books. I only started writing fiction about 3 years ago. But I enjoy nonfiction the most because I can use my experiences.
5. Give us a picture of where you write, where you compose these words…is it Starbucks, a den. A garden…we want to know your inner sanctum?
People write in a garden? I write in a messy 10x10 office which was designed
as a bedroom. I write at a huge oak desk which is too big for the room but has too
much charm to get rid of. An oak file cabinet sits next to it and holds files and the
printer. A bin full of my winter clothes sits in the corner on top of a bin full of guns and
ammo that I’m holding for my son-in-law (don’t ask), and a keyboard sits behind me.
When company comes, all the clutter sitting around the second floor is put in my
office “just for now” which clutters it further. I just announce to my wife, “yeah, let’s just
put it in Jay’s room.” But she just ignores me. But you don’t have to guess what it
looks like; here’s a picture from the book: 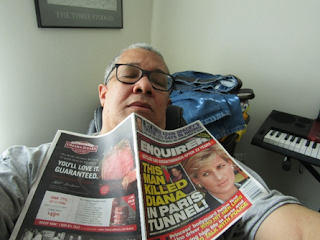 Draw your own conclusions. Read the book and find out why I took this picture. (Yes,
it’s a selfie.)

6. And finally, of course…was there any specific event or circumstance that made
you want to be a writer?
I would love to say that I sat in on a reading by Maya Angelou and ran out and
bought a notebook but it really wasn’t that dramatic. I recall starting to enjoy English as
a senior in high school and then becoming an English Major in college. I planned on
finding an occupation that centered around writing and writing on the side. I got married,
had three kids and got into writing when I was 45. Just as I planned it.

James Robinson, Jr. is an award-wining author who has written 6 books in both the fiction and non-fiction genres. His first book Fighting the Effects of Gravity: A Bittersweet Journey Into Middle Life, was an Indie Award winner for nonfiction. His first foray into fiction, Book of Samuel, was a Readers’ Favorite Award Winner. His latest book—Jay Got Married—is a collection of 9 humorous, sometimes poignant essays.
Mr. Robinson resides in Pittsburgh, PA with his wife of 43 years. He is the father of three daughters ages 37, 38, and 40 and has six grandchildren