What made me write this book was an inexplicable relentless force driving me to do it. In the mid 1990’s, my family and I were mourning the loss of my sister to Breast Cancer. We were in a depressed state that seemed endless.

My sister, in her early 30’s, had left two beautiful girls that hadn’t even started school yet. Her death was at the forefront of my every thought and action.

I had always wanted to write a book but never really knew what it should be about. One night the seed of the idea appeared to me in a dream and it became a preoccupation. Pieces of a possible story would pop into my mind when I least expected it. I began to think about the book instead of my sister. It grew from a thought to a ‘maybe I can do this.’ After the complete storyline materialized in my head while I was circling forea landing in Detroit to spend the weekend with another sister, I became obsessed with it.  It became something that just needed to come out. The book had to be written.

I’ve always had a great imagination and I tend to think of things differently than most. This story line for Totally Devoted pretty much just came to me rather quickly, whether or not it other forces were involved with that inspiration I’ll never know. But as far as storylines for other books, no two books are the same.  Sometimes I hear a song and it will trigger a feeling then I build on it. Sometime the inspiration comes from a physical location I visit. I think about different scenarios and pick the one that seems the most interesting or entertaining. 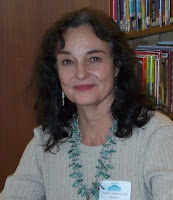 When I was eighteen, I married my high school boyfriend and left home. That marriage lasted 9 months. I went back home for 3 months decided I had grown beyond living with mom and dad, moved out on my own and haven’t looked back. I moved from suburban Michigan to Los Angeles, California. I did a lot of exploration and gained tons of life knowledge in the next six years. I meet people from all walks of life and learned a great deal about different lifestyles and philosophies.  I met my husband there 42 years ago. We’ve been married for the last 41. We’ve lived in California, Florida, Oregon, Alaska, and Wyoming. We both had project management jobs and traveled around the country. Our life has been anything but boring.

As far as where my storylines come from, I have a vast treasure trove of life experiences to choose from and the imagination to embellish and enhance them with.

Was this book easier to write than others?
Why?

In some ways, yes, I had a solid storyline that I was confident in right from the get go. It being my first book there was a lot of unfamiliar territory.  It was a wonderful learning ground for things like outlines, character lists, checking facts and locations. The publishing and marketing process is one that I’m still learning. Through it all I’ve learned a lot and know that I want to continue writing. I’ve got two books going so far and ideas for many more.

I only write sexy romance. It’s the kind of books I like to read and the kind I feel most comfortable with. My books are directed towards women. I don’t write for teens. So

far my lead characters have usually been hurt by love before and not willing to jump into it again. I think the type of lifelong love my characters are looking for comes with maturity. I want my readers to feel empathy for my characters, maybe because they’ve been there, too, or know someone who has.

My books usually take place in the late 1990’s and early 2000’s. I live in a rural part of Wyoming. We’ve got horses, chickens, ATV’s, and an elementary school with only 14 students. Technology has a hard time taking hold. We get no cell phone service at our house and only use our cell phone for trips to town, 40 miles away, to check before we leave the grocery store that nothing was left off the list. Broadband internet is something that will never come to our little part of the world, at least in my lifetime. So needless to say, it would be rare to find a tech savvy character in my books.

Since I live in a western environment, I’ve recently been toying with the idea of writing an 1800’s sexy romance novel.

I prefer writing with a full size keyboard and a desktop computer. I have a laptop but hate the little mouse pad. My hand always slips on it and my curser ends up somewhere I don’t want it. Forget about writing on my newly acquired iPad. I wouldn’t even consider that thing they provide a keyboard. I only got the iPad so I can Facetime with my grandson.

I live in the shadows of the Rocky Mountains and have a panoramic view from anywhere on our property including my office. I just look out the window to get inspired,

Describe what made you want to be a writer?

My interest in writing came from my father. He was a great story teller and in retrospect I think his imagination was like mine, vast and varied. If it hadn’t been that he had seven kids and had to work very hard to support them, I think he could have been a great writer.  When I was younger I read everything I could get. I loved poetry. As I got older my book selections became more avant- garde. I loved ready racy love novels and science fiction. Until I got the inspiration for Totally Devoted, my writing had been limited to poems and short stories, and few newsletter articles.  Now that I’ve got one book under my belt, I’m hooked.

I’d like to thank you for letting my virtual book tour stop in so I can introduce myself to your readers and hopefully get them interested in reading Totally Devoted.  I’d like to end with reminding your readers to leave reviews when they read. It’s so important to the authors to get feedback. We appreciate and value it so much.