This post is part of a virtual book tour organized by Goddess Fish Promotions. Diane Demetre will be awarding a $25  Amazon or B/N GC to a randomly drawn winner via rafflecopter during the tour.


She’s a ballerina with a dark secret. He’s a retired sniper with a tortured past. Will they find love or fall prey to a stalker’s deadly game? 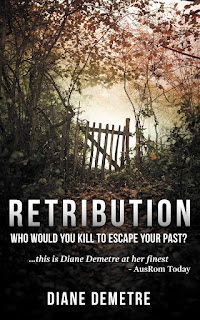 Professional ballerina Jessie Hilton wraps her battle scars in satin pointe shoes, but there’s a deeper hurt that haunts her sleep. When a handsome man steps in to save her from a mugging, something about her hero makes her heavy heart leap. Though her career can’t afford distractions, he may be her sole source of safety when she gains the unwanted attention of a relentless stalker.

Ex-sniper Brad Jordan survived his tour of duty, but a tragic accident cost him the lives of those closest to him. With his faithful border collie Whiskey by his side, Brad gets a second chance when he protects the beautiful Jessie from danger. When the ballerina's stalker grows more brazen, Brad's tactical training may be their only weapon against tragedy.

Will Jessie and Brad survive a deadly game, or will the assailant destroy their chance at love?

Read an excerpt...
Cold, damp and hard—wherever she was, it wasn’t her bed. Scattered thoughts whirled in her head as she searched for recent memories. A pungent smell lingered in her nose wakening her further. It reminded her of science class. What was it? Chloroform? Crunched on her side, her body cried for movement and she strained to focus on her surroundings. But she couldn’t. She was groggy and dazed and there was no light by which to see. Exhausted, she heaved her hand in front of her face, but she couldn’t see that either. It was as if it wasn’t there. Absolute, petrifying blackness. A nightmare. It was another nightmare. But she knew it wasn’t. Now fully conscious, she lay somewhere dank and cold, in pitch blackness. The inability to see rendered her immobile, preventing her any chance of escape. Even if she began to crawl, feeling her way, she might tumble down a precipice or a staircase. She didn’t even know whether she was lying on the ground or on something man-made. All she knew was it was rock-solid, cold and a little uneven. He’s left me here, alone, to die. The thought scared her even more than her captor returning.

She rolled carefully onto her back. Stretching her body, she used her hands and feet to check that she wasn’t about to roll off wherever she lay. Once assured she was safe, she relaxed a little. Deep, controlled breaths cleared her mind and nose of whatever drug he’d used. With no idea how long she’d been unconscious, she existed in an abyss of unknown time. She struggled not to panic. As she stared into nothing, her sense of what was up and what was down destabilized. The subtle illusion of losing her balance teased her inner ear, increasing the fear. Rolling over slowly, she managed to get onto her hands and knees, connecting with the surface below to correct her equilibrium. Head lolling forward, she froze— humiliated, helpless and hopeless, overcome with despair. Minutes slipped by or was it hours?

Check out this Interesting Interview with Diane Demetre  Click HERE

Being a passionate woman who’s always done things a little differently, Diane’s diverse career began as a school teacher before she moved into a full-time career as a professional choreographer, director and dancer, strutting her stuff on many stages throughout Australia. She was responsible for the original multi-million dollar extravaganzas at Conrad Jupiter’s Casino, Gold Coast—Starz & Galaxies.
Following her onstage career, Diane’s thirst for knowledge led her into the field of self- 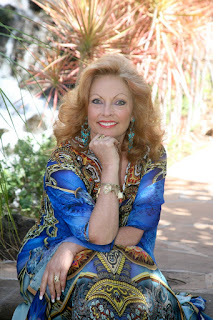 development. Using her highly developed communication skills and love of people, she spent many years as a stress & life skills therapist and life coach, teaching individuals, couples and groups the methodologies of personal success and fulfilment.

With her business acumen, Diane launched into the corporate arena, working in a variety of positions as a consultant in marketing, special events, tourism, business strategies, quality management and human resource management. Combining her entertainment and business backgrounds, she returned to the stage as a keynote speaker and corporate facilitator, educating business leaders in the ‘new mindset’ for business and relationship building in the 21st century.
Assuming the pseudonym of the Goddess of Love, she appeared as a guest presenter on Gold FM radio, Gold Coast, a national radio program broadcast to 1.4million listeners. Her weekly program proved popular with Diane providing empowering advice on life, love, sex and relationships, sprinkled with a good dose of humour. Her passion for life and compulsive sharing nature made her a great inspiration to her listeners. As the Goddess of Love she also appeared as a regular guest on the national television program Beauty & the Beast, where her practical insights were televised to viewers across Australia.
When she launched into a writing career, Diane’s debut erotic romance series, the Dance of Love was voted Luminosity Publishing Readers’ Choice Best Books and Best Covers for 2015 and 2016.
Her romantic suspense, Retribution won the Romance Writers of Australia Emerald Pro Award 2017 for Best Unpublished Manuscript. Diane loves to write genre-busting stories with a twist. Her works are packed with emotional punch and feature empowered heroines who live life to the fullest, much like the author herself.