Ice on the Bay

The forecast: Record cold. The crimes: Colder still.
A saintly young veterinary technician disappears on Christmas Eve, leaving behind only a broken window and smears of blood on his clinic's back steps. Two years later, his disappearance remains a mystery. A home in an exclusive area burns to the ground, mirroring fires ignited the previous year by an arsonist who now sits in prison. Is the new fire a copycat, or has the wrong man been convicted? A criminal with a long list of enemies is shot dead, and not even his friends are sorry. While temperatures plummet, cold cases collide with new crimes, and somewhere a killer with blood as icy as the waters of the Chesapeake Bay watches and waits.

EXCERPT:
Hannah took two pairs of latex gloves from her pocket and handed one pair to Harold. They pulled them on, careful not to rip them, then Harold eased up the short flight of wooden steps leading to the door, his footfalls quieter than a rabbit's. He gently rotated the knob. Of course it was locked, but it never hurt to check. No sense smashing things if the owner had invited them in. Leaning to the left, he felt around the nearest window, examined it in detail, and gingerly tried to push up the lower sash. Again, no luck. Again, none expected.

Hannah tiptoed up the steps while he worked and stood close behind him. "Hammer," she whispered, pulling the tool from her coat pocket and handing it to him like a nurse handing a scalpel to a surgeon.

He took the hammer and with a swift stroke smashed the pane, then cleaned the jagged shards from the sash with the head. Falling splinters chattered as they struck the floor inside. Once satisfied the opening was clean, he helped Hannah through the window. She moved so quietly she might have vanished, but in his mind Harold could see her go to the door, disarm the alarm with the code they had been given, and unlock the deadbolt. The door whispered open.

He slipped inside and eased the door shut, then took her face in his hands and kissed her on the forehead. She beamed, a dog basking in her master's approval.

The very next instant, the job went horribly wrong.

MY REVIEW:  If you happen to see that this series is written by a software developer and you see that some of the other titles he’s written sound way beyond all of us, do not for a minute think he can’t write Crime Fiction because that’s what this is.  A story about cops and crime and cops dealing with crime.  But also a story about cops handling the daily emotion of their lives as well as what crime itself can add to that. There's a little bit of a love story in here. In fact this is not just police sitting in their cubicles. Some of them are trying to solve arson cases, some are hunting murderers and some are trying to help people get their lives straightened out too.

One of the things I enjoyed so much about this book was that there were so many pieces; so many human aspects to it and yet I think it was probably close to reality. Maybe not on the Bay where the setting is but in many cities in the U.S. today.  This story really covers a lot of the aspects of our lives while being Crime Fiction.  It does not jump around and is not hard to follow but I think the reason for that is Lehman’s handling of his characters. I enjoyed these characters.  I felt sadness and loneliness for some; confusion and frustration for others. Making you feel the emotions of characters in a book like this means Lehman did a good job with character development. It takes a good writer to make you feel what his characters are feeling; especially so in a crime fiction storyline which can be very black and white.  Full of cop’s offices, procedural dialog and paperwork.

This is Book 3 of "Howard County Mystery series". With characters like Lehman has written here, I'm sure the other books in the series are as well worth reading as this one was.

Dale E. Lehman will be awarding a $10 Amazon/BN GC to a randomly drawn winner via rafflecopter during the tour. (see below) 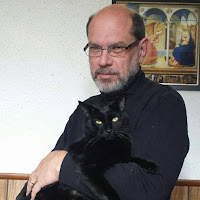 training. He is the author of the Howard County Mysteries series (The Fibonacci Murders, True Death, and Ice on the Bay ). His writing has also appeared in Sky & Telescope and a couple of software development journals. With his wife Kathleen he owns and operates One Voice Press and Serpent Cliff. They have five children, five grandchildren, and two feisty cats.

Ice on the Bay: https://www.serpentcliff.com/content/ice-bay

The more you comment the better the chance to win.  Check out these other links...

I enjoyed getting to know your book; congrats on the tour and I hope it is a fun one for you :)

Good morning! Thank you for having me. I'm gratified you enjoyed "Ice on the Bay," and I'm looking forward to meeting everyone here and answering any questions you may have. I'll be out for a few hours in the afternoon (U.S. Eastern time), but I'll catch up on things once I get back. Have a great day!

Dale, Very good to be hosting your book on my blog. I am going to apologize early because (this is so hard to admit) I found a word left out in my review and another one left in. How could I have done such a thing to a great book.

I promise they are corrected and I hope everyone visiting here puts your book on their "to be read" list.

No problem, Kathy. These things happen. I was kicking myself yesterday for a typo I found in a guest post I wrote for an earlier tour stop. One of these days I'm going to get myself a t-shirt that reads, "I hate typogorphical errors!" ;-)

Thanks for hosting the giveaway. This looks like a fun read. Bernie Wallace BWallace1980(at)hotmail(d0t)com

Thank you, everyone! I enjoyed stopping by today and meeting everyone. I'll keep checking in from time to time to catch up on any further comments. I hope you all have a chance to read "Ice on the Bay" and enjoy it as much as Kathleen and I enjoyed writing it!

Thanks for sharing your review and for the great giveaway! :)

Oh this sounds so good! I love mysteries, and
Dale E. Lehman is a new author for me.
This sounds like one I would not want to put down!

Our pre-release reviews have suggested you won't want to put it down. ;-) I hope you pick it up one way or another. Today is release day, in fact. If you don't win the raffle, you can get the book from Amazon (Kindle only) or the publisher, https://www.serpentcliff.com. If you go there and get the paperback, use coupon code 2018ICE001 for $3.00 off, plus we'll sign it for you. Thanks!