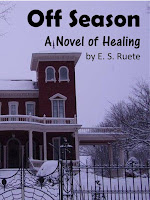 I enjoyed getting to know your book and thanks for the chance to win :)

Who is your favorite author of all time? Thanks for hosting. I hope that I win. Bernie Wallace BWallace1980(at)hotmail(d0t)com

Bernie,
I hope we'll hear from E. S. Reute about his all time favorite author.
But...since he isn't here, you get mine:) you might have heard mine happens to be Ayn Rand. On the other hand...there are so many talented authors and I can't even imagine getting all of my thoughts in a row like that so...I bet I have other authors I would call favorites, not just "all-time" favs. How about you?

Congrats on the tour and I appreciate the excerpt and the great giveaway as well. Love the tours, I get to find books and share with my sisters and now my twin daughters who all love to read. We have found some amazing books for everyone. So, thank you!

Great post, I enjoyed reading it and thanks for the awesome giveaway :)