This post is part of a virtual book tour organized by Goddess Fish Promotions. Conrad Bishop and Elizabeth Fuller will be awarding $25 Amazon or Barnes and Noble GC to a randomly drawn winner via rafflecopter during the tour.


It's a monstrous maze of a mansion, built by a grief-ridden heiress. A tour guide, about to retire, has given his spiel for so many years that he's gone blind. On this last tour, he's slammed with second sight. 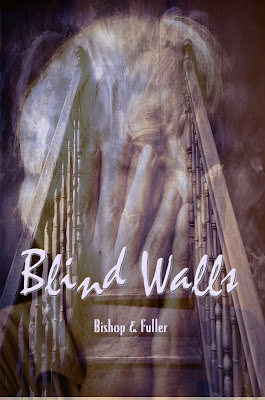 He sees the ghosts he's always felt were there: the bedeviled heiress, her servants, and a young carpenter who lands his dream job only to become a lifelong slave to her obsession. The workman's wife makes it to shore, but he's cast adrift.

And the tour guide comes home to his cat.

The pairing of Bishop and Fuller is a magical one. . . . It’s a brilliant opus, melding the past, present, and future with intimate, individual viewpoints from a tightly arrayed cast of believable characters in as eerie a setting as might be dredged out of everyman’s subconscious searching. . . . Blind Walls offers a weird alternative world, featuring a blind man with second sight and an acerbic wit as its charming, empathic hero.
—Feathered Quill

These characters are so well developed that one has to think of them as live people – laughing with them and crying with them, even getting old with them.  This is an amazing story based on the Winchester Mansion and told with such quiet, compelling, raw humanity that the reader simply can’t stop until the entire tale is told.  A wonderful, spooky look into others lives and what may or may not happen on any given day.
—Dog-Eared Reviews

Bishop and Fuller have constructed a story rich with imagined detail and visionary ideas about life’s possibilities. The cast of ghostly characters, servants, workman, and family light up the story with dramatic effect as their actions and choices are observed. . . . The authors’ prose is effortless and moves easily from humorous to weighted seriousness. The dialogue is perceptive, giving voice to compelling characters and particularly to the tour guide whose second sight he confers on the readers. The latter will not want to look away from the myriad rooms of Weatherlee House.
—US Review of Books

I was surprised at the old woman’s humor—far better than mine. Ghosts are known for their moans and clatters but not for their jokes. She should be the tour guide, I thought, and I the haunted heiress.

The corridor bent, doubled back, made a squiggle of jogs, then opened to a hall that stretched like the endless trudge between airport terminals. When had this vast new suburb come into being? Had Weatherlee House consumed orchards, colonized neighbors, licked whole valleys with its thick coated tongue? Or might we be in those underground shadowlands where they store the great bombs for Last Judgment? I could hear the deep whine of missiles rising.

I saw a dim figure, an ambient smudge whom I seemed to be following. It was Chuck, a silhouette in a well-tailored suit. His gait was lumbering, tense, as if pretending calm while pursued by a bear. At intervals he passed through sharp light and I could see his rigid face. A lamp shone at the end of the passage. He paused, entered the room. I came forward with my breathless gaggle of goslings.

Click HERE to read an insightful interview of the authors.

Conrad Bishop & Elizabeth Fuller’s 60+ plays have been produced Off-Broadway, in regional theatres,  and in thousands of their own performances coast to coast. Their two public radio series Family Snapshots and Hitchhiking off the Map have been heard nationally. Their books include two previous novels (Realists and Galahad’s Fool), a memoir (Co-Creation: Fifty Years in the Making), and two anthologies of their plays (Rash Acts: 35 Snapshots for the Stage and Mythic Plays: from Inanna to Frankenstein.) 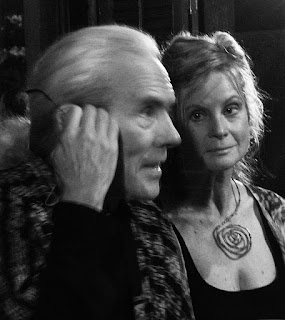 They host a weekly blog on writing, theatre, and life at www.DamnedFool.com. Their theatre work is chronicled at www.IndependentEye.org. Short videos of their theatre and puppetry work are at www.YouTube.com/indepeye. Bishop has a Stanford Ph.D., Fuller is a college drop-out, but somehow they see eye to eye. They have been working partners and bedmates for 57 years.