The Angel and the Seal Review

This post is part of a virtual book tour organized by Goddess Fish Promotions. Petie McCarty will be awarding a $10 Amazon or Barnes and Noble GC to a randomly drawn winner via rafflecopter during the tour. 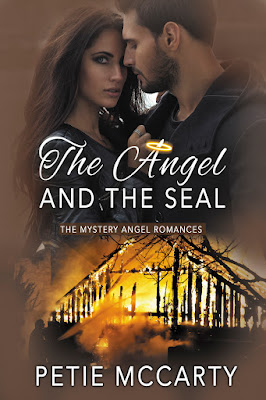 My Review...
I really enjoyed this book, I think part of it was the setting which is an old cabin-like resort. While on a lake, although called a resort, it was built many years before as a fisherman’s dream place. Now that the father is dead, his daughter is running it; trying to keep the books on the plus side of the ledger line and really having problems. This has such excellent characters. I especially loved an old manager named Vern who has had more to do with Cory’s upbringing than anyone. He was my favorite, tough yet soft and caring, seasoned and yet young in his own way. Petie McCarty has done such a good job of describing and defining her characters that I felt like I could see every one of them and that I knew every one of them. As if they were my friends, except for the bad guys and/or girls, of course.

You’d never be able to tell it by my description here, but this romance stuff is not my favorite genre, well not my genre at all. But you know most of the romance here was like everyday life. The mystery part of the story created lots of twists and turns. There were some points in the story where I was pulling my hair and yelling, “oh come on, stop arguing and being silly and get together”. But you know something about that? If an author can get you that moved…well, then that’s pretty good writing isn’t it?
This is Book 3 in a series titled “The Mystery Angel Romances”.
Petie McCarty has several other books published and all of them have good reviews.

A scream ripped through the air.

Mac jerked his head up in time to see the end of the dock collapse—with Cory in the middle of it—and Vern streaking for the water. The black Lab galloped out of the rear garden, barking his fool head off.

Mac vaulted from the tractor and had his feet under him before he grabbed his next breath. Panic put wings to his feet. Cory hadn’t bobbed up by the time Vern reached the collapsed end of the dock. The old man disappeared beneath the surface, and Garth perched at the end of the sagging dock, barking his complaints.

Dear God, not Cory. Don’t let anything happen to my Cory.

Mac’s feet left the lakeshore on a dead run, and he sliced into the water, stroking before he completely submerged. A handful of power strokes and he reached the spot where Vern had gone down. Mac dove under to find the old man red-faced and struggling to hold his breath while he heaved on a dock piling that had toppled over and pinned Cory’s legs to the lake bottom. In the crystal-clear water, Vern’s eyes had gone wide with fright. Cory monitored his approach but lay limp and had ceased to struggle.

Two dock boards remained pinned to the collapsed piling and framed her lithe body like the sides of a coffin. He stroked to her side, put his shoulder under the closest dock board, and prayed it would hold tight to the piling as Mac pressed upward with all his might. Thank God, Vern saw what he intended, and though short on air himself, the old caretaker scooted around and tugged Cory free from beneath the piling.

Mac waited until they were well and clear before he dropped the mass to the lake bottom. His heart jolted hard when he saw Vern go limp. He had nothing left.

Mac wrapped one arm around the caretaker and the other around Cory and pushed hard for the surface, thankfully but a few feet up. Mac managed to hold both their heads above water and kicked hard for shore. Garth howled and whined as he paced the length of what remained of the collapsed dock. Mac dragged both bodies up and out of the water the minute his feet found purchase on the lake bottom, then he laid them both out on the sandy shore. Vern rolled to his knees and began to cough and hack.

Mac crouched over Cory lying limply on her side, her eyes closed. He detected a weak heartbeat when he laid two fingers to her throat and leaned his cheek close to check for breathing. Hearing only his own labored breathing, he tugged her chin down with a thumb and stuck a finger into her mouth, intent on clearing an air passage.

Teeth clamped hard on his finger.

“Yeow!” He managed to yank the entire digit free.

“Well, get our finger out of my mouth,” Cory huffed and struggled to sit up. “What are you doing?”

“I was just spent, not dead. I used up everything I had struggling to get free of the piling.”

Before she could lodge another complaint, Mac dragged her to his chest and held her as though he’d never let her go. Petie spent a large part of her career working at Walt Disney World—"The  Most Magical Place on Earth"—where she enjoyed working in the land of fairy tales by day and creating her own romantic fairy tales by night, including her new series, The Cinderella Romances. She eventually said good-bye to her "day" job to write her stories full-time. These days Petie spends her time writing sequels to her regency time-travel series, Lords in Time, and her cozy-mystery-with-romantic-suspense series, the Mystery Angel Romances.
Petie shares her home on the Cumberland Plateau in Tennessee with her horticulturist husband and an opinionated Nanday conure named Sassy who made a cameo appearance in No Angels for Christmas.

Thank you for sharing this! I love this kind of stories so I'll be starting the series soon :)

Thanks for the review.

Great cover. How did the cover change through original concept to final product?

Great addition to the series