This post is part of a virtual book tour organized by Goddess FishPromotions.

W. F. Ranew will be awarding a $15 Amazon/BN GC to a randomly drawn winner via rafflecopter during the tour.

only wants to get a shot at country music stardom. While playing in a Georgia bar, Hank—known as Cowboy to his fans—stumbles into trouble. The kind that kills. PI Red Farlow steps in to help him.

Hank’s song, Redneck Devil, attracts the attention of a violent group called the Blue Magnolia. Its leaders want him to perform at their next hate rally. There's another, darker reason the Blue Magnolia wants Hank in its fold.

An elderly patient in a Florida insane asylum reveals a decades-long secret that devastates Hank. It’s the worst kind of fake news.

Can Farlow root out the truth? The PI has his own problems as he confronts a hired killer face-to-face.

Another Red Farlowe mystery. A character I really like. Tough yet caring, smart yet streetwise, all the things you look for in this type of tough, gritty mystery.

The composition of this book was different from the other Red Farlowe mystery I read, Rich and Gone. Red’s case notes were interspersed in this one and it took me some time to adjust my reading rhythm. Don’t get me wrong. It was marked. Just something I wasn’t used to. Not bad; just different.  Also the writing style was different in places... the sentences shorter, more reporting like. But it achieved the feeling I think Ranew was trying to accomplish. Made this more black noir-like in a few ways. Ranew added a few more characters. Some good guys/girls, some not so good.

This is not really a book filled with descriptive writing. Ranew’s a storyteller and a good one. I think all it really needs is another book in the series as soon as possible :)

As he connected the amp to the microphone, foot pedal, and other electrical components, someone walked up to him.

“Can I get you a Coke, sweetie pie?” the tender young voice behind him asked.

Hank turned to see a divine presence. He couldn’t say anything for a moment because he started trembling. Did her beauty do this to him? Or perhaps the way she gently touched his shoulder and bent over slightly, revealing her ample cleavage right there in his face? Yes, those things made him quiver at that moment. Her perfume, her hair, everything about her tossed him up, down, and all over the place. He didn’t think he could stand up. He just squatted there, right knee on the floor, and nervously fiddled with the amp.

Sybbe smiled down at him. She turned and walked to the bar. She swayed, undulated, bounced, all in a graceful way. She asked the bartender for the soft drink, a big one, and cocked her right hip wide out with her left foot resting on the foot railing, and looked back across the room at Hank. 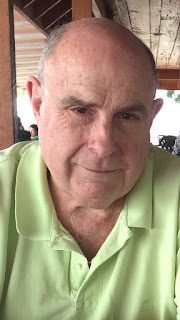 W.F. Ranew is a former newspaper reporter, editor, and communication executive. He started his journalism career covering sports, police, and city council meetings at his hometown newspaper, The Quitman Free Press. He also worked as a reporter and editor for several regional dailies: The Augusta (Ga.) Chronicle, The Florida Times-Union, and The Atlanta Journal-Constitution.

Email ThisBlogThis!Share to TwitterShare to FacebookShare to Pinterest
Labels: series