This post is part of a virtual book tour organized by Goddess Fish Promotions. Susan Lute will be awarding a $15 Amazon/BN GC to a randomly drawn winner via rafflecopter during the tour. Click on the tour banner to see the other stops on the tour. 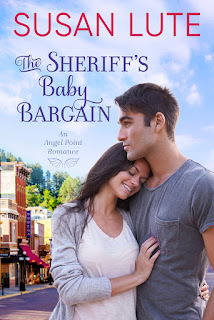 She's just what the doctor ordered... but never knew he needed.

U.S. Marshal-turned-Sheriff Taylor James can trace her family back to the original thirteen Marshals appointed by George Washington. She's good at her job, but once they find out she's the local law, she can't get even one of her dates to stay past the appetizers. Her plan? Convince good friend and hot neighbor Dr. Gabriel Adams to give her dating lessons since his dance card is always full.

A survivor of childhood leukemia with no guarantee his remission will last, Gabe lives by two rules: Don't get emotionally involved and don't let his well organized life spiral out of control. When he's given a baby, with his name on her birth certificate, he needs Taylor's help. But dangling dating lessons in exchange? If that will get the dedicated sheriff to lend a helping hand, could it be a bargain worth making?

“You’d make a great mother.” The words were out before he could stop them.

She straightened with a sputtered laugh. “I don’t think so. My mother wasn’t a good role model. The one thing I learned from her was, if I’m ever lucky enough to have a child of my own, I’ll never walk away. No matter what the reason. You have more experience with babies in your little pinky than I’ve had my entire life.”

Who would have guessed an insecure little girl lived in Taylor’s past? As her friend, he should have known, but she would body slam him if he showed even an ampule of sympathy.

He asked, “What is it you need?” When she stared at him, her expression blank, he clarified. “The favor you mentioned.”

She suddenly stood as though her pants were on fire. “Shoot! I’m going to be late for work. Gotta go.”

As he watched her walk away, Gabe tried to remember he had no right to feel like he’d just let something important go. He’d made a life for himself that worked, and there was no question in his mind that he had to stick with the rules he’d set.

Gathering their empty cups, he left the remains of their coffee in a tall metal dish rack in the corner by the kitchen. Whether he liked it or not, he’d accomplished his mission.

His friendship with Taylor James remained intact. As it should be. But that pesky voice in his head wouldn’t be silenced.

Is that what you really want?

About the Author: Susan is an award winning, multi-published traditional and Indie author. Her debut novel, Oops…We’re Married? was a Reader’s Choice nominee and Holt Medallion Finalist. She describes herself first and foremost as a wife, mother, sister, daughter, friend, dreamer, and novelist. When not working as a nurse she writes, travels whenever she can, and remodels her house.