BLURB:
One hit man who’s back for revenge. One detective who’s not going down without a fight.

It’s been ten months since Detective Madison Knight almost died at the hands of Russian Mafia hit man Constantine Romanov. She hasn’t seen hide nor hair of him since he escaped police custody and fled to Russia soon after his arrest, except now her latest murder investigation gives her reason to believe he’s back in town. Seeing as the victim is the man who killed her grandfather, her perspective may be a little skewed, but with the MO smacking of Constantine and the victim’s connections to the mob, she finds it hard to be objective. Still, she’s doing her best to consider all the evidence.

When she receives a threatening letter from Constantine, however, her suspicions are confirmed. And he’s made it abundantly clear that not only does he plan to finish what he started but he has her family and loved ones in the crosshairs, too. Madison vows to do whatever it takes to save them, but as the hours race by, the body count rises. And the stakes only get higher when Madison’s sister, Chelsea, goes missing.

Now, Madison’s only play is to take Chelsea’s disappearance for what it really means: Constantine is calling Madison out for one final showdown. And they won’t both survive… 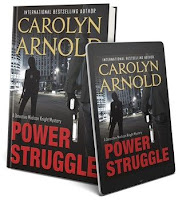 As she walked to her car, the air was cold and bitter. Snow was in the forecast, and she hugged her coat to herself. Goose bumps formed on her flesh, but it wasn’t from the chill. Something was tucked under one of her wiper blades. It could just be a flyer of some kind, but her instincts were firing off warning signals in rapid succession. As she got closer, she saw it was an envelope. She plucked it off the windshield and read the outside: Detective Madison Knight.Shivers sliced through her body, and her breathing quickened.
Did she really want to open this? What if it somehow confirmed all her paranoia as fact, that Constantine was in town and she had his attention?Swallowing hard, she slipped a finger under the unsealed lip of the envelope, pulled out a tri-folded piece of paper, and read it:Were you missing me? No need to any longer. I’m back, and I have my eye on you and yours. -- CShe dropped the letter and braced herself against the hood of the car. Her head was spinning and her heart hammering. She felt all the blood drain from her face as dread washed over her, weighing her down to the concrete.This couldn’t be happening. She’d become complacent, lulling herself into a false sense of security by hiding behind words and faulty logic. And for Constantine to have left this here, he would have been here in the last hour. That meant he must have been following her. And the parking lot was above ground with automated gates… He had been brazen enough to expose himself in the light of day.
She spun around, frantically studying her surroundings, but she saw no one. Her gut knotted and breathing was becoming increasingly difficult. It was clear he had every intention of following through with his threat. She looked down at the piece of paper that lay on the ground at her feet and went to pick it up. She found herself hesitating, as if it were a serpent that would bite her hand. Any hope that Constantine was long gone disintegrated, because the truth was, Constantine was still in town and he was coming for her. And, from the sound of it, her loved ones.

MY REVIEW:
Carolyn Arnold has written a spellbinding cop vs bad guy mystery and it is definitely worth reading.  This is what I would call Crime Fiction and it’s very well done.

I enjoyed the interplay between the cops and their superiors.  While there was a certain amount of the “bossy Lieutenant” and headstrong cop in this book, it was well-written as a dialogue rather than become tiresome as some books can.  I seemed to recognize every character throughout the book and that means Arnold did a good job of developing her characters.  Maybe even more so, she seemed to draw a very good picture of them through her writing.  Having a feel of what a character looks like makes every read a more enjoyable one.  In the long run I did have a few moments that made me want to tell Maddie to “buck up” but I have decided that this is my own upbringing and not reality.  Arnold’s book is probably a good description of reality.  Nor have I ever been faced with the possibility of losing my life as well as endangering other’s lives.  I don’t think we can really judge an author in this sense of a story.  Who can know how being that afraid might feel? Fortunately, very few of us.


This was definitely a good book and one to put on your “wish list” of reading.  I hope we see a “Detective Madison Knight series” begin.  Madison’s plucky and I liked her.


Carolyn Arnold will award a print copy of IN THE LINE OF DUTY to a randomly drawn commenter. (US, Canada, UK only) 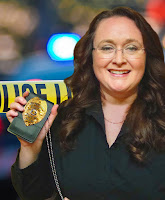 She currently lives just west of Toronto with her husband and beagle and is a member of Crime Writers of Canada and Sisters in Crime.