Hidden in the shadows of our world, supernatural creatures wage war for the fate of humanity.

Euadaemons protect the innocent, Kakodaemons desire absolute power. Both have altered Krista Culver’s life. After spending the past ten years as a Drone for evil, she’s finally awake and doesn't want to waste another moment. No one will stand in the way of her kicking Kako butt. Not her sister, not her father, not even her incredibly tempting boss.

Racine is about to go mad trying to find his evil twin brother responsible for the Kako uprising, but Rysis is in the wind. Adding to his problems, Krista returned from Enforcer training. Gone is the sweet girl. In her place is a fierce woman who stirs something deep inside. Something he thought long dead and buried.

As their desires grow so does the danger surrounding them. The Kako threat is mounting and the time for a reckoning has come.


“Shut up and help me kill this thing,” she replied.

He cursed, saying something about stubborn women. She smiled, knowing she had won this small battle. Now they just needed to win the next one, the one currently walking toward them with pointy teeth and a look that promised death.

The Cer, as tall and large as Racine, stopped a few feet in front of them. It opened its massive jaws to let out another bloodcurdling shriek. Her Tira charged, sword up and swinging toward the massive beast’s head. The Cer ducked the blow with impressive speed.

Krista threw one of her knives. It landed with a satisfying thunk right in the Cer’s side. The beast howled in pain. Its red eyes narrowed on her. It pulled the blade from its side, hissing through massive fangs. She threw her other knife, landing it straight in the
Cer’s chest. If she could distract the monster, maybe Racine could sneak up on it and cut off its head.

The Cer staggered with the new blow, but didn’t fall. In fact, it only looked angrier. Great, she just pissed off a minion of hell and now she only had one weapon left. She left her rods back at base, but still wore her whip belt. Pulling the weapon from her waist, she faced the Cer.

“Do you have to taunt the creature currently trying to kill us?” Racine asked beside her.

“Well, I’m not going to sing it love songs.”


AUTHOR Bio and Links:  Mariah Ankenman will be awarding a $10 Amazon/BN GC to a randomly drawn winner via rafflecopter during the tour. 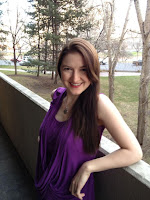 Mountains with her two rambunctious daughters and loving husband who provides ample inspiration for her heart-stopping heroes.

Whether she’s writing hometown heroes or sexy supernaturals, Mariah loves to lose herself in a world of words. Her favorite thing about writing is when she can make someone’s day a little brighter with one of her books.