This post is part of a virtual book tour organized by Goddess Fish Promotions. The authors will be awarding a $10 Amazon or B/N GC to a randomly drawn winner via rafflecopter during the tour. Click on the tour banner to see the other stops on the tour. 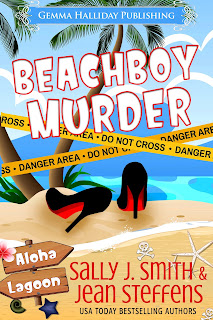 Just as travel agent turned reluctant sleuth Gabby LeClair is starting to gain some of the Aloha spirit, a business consortium from Chicago breezes into the Aloha Lagoon resort and offers to buy her business. The offer is tempting...but so is hot helicopter pilot Rick Dawson, making it a difficult decision. One that becomes even more complicated when a dead body is discovered in Gabby's backyard, and she's suddenly thrust in the middle of a murder investigation!

The dead man is a former beachboy attendant from the island. With a trail of broken hearts—not to mention jealous rivals—leading up to the beachboy, Gabby tries to uncover just who had it in for the late lothario. Is the female of the species really more deadly than the male? Or has the beachboy scorned one too many women for some other man's liking?

One of the first things I’ll say about this book is the authors were most certainly good at describing a setting. This book is not full of descriptions of the island of Hawaii. Most of the talk is about island breezes and sweet scents of flowers but it was so good, they sure had me sitting at a beautiful outdoor bar with fruit in my drink and flowers around my neck. At least in my mind they did. This is a fun story with likable characters. Just a really good feel in your heart kind of book. It has your good guys and your bad guys; your wild chases and your cop that’s always mad at the amateur sleuth for butting in. That amateur sleuth is named Gabby this time and she and her flyboy guy and her other friends are those likable, well-defined friends I mentioned.

Almost every book in this series is written by a different author. That’s something I might question about the flow or constancy of the storyline. However, every book has good ratings so obviously that has not been a feeling of future readers.

This is Book 11 in the series titled “Aloha Lagoon Mysteries”.  While this can definitely be a stand-alone read, it sure might be worth checking out Book 1 thru 10 too.

Mele's sudden cry was audible all the way across the lobby. "Oh my gosh. It's him!" She gawked.

Ona turned to see, and her mouth dropped open, which caused the rest of us to follow her stare.

Striding through the front entrance was a tall, well-built man. He moved with swagger, the sexy confidence of a man who knew that everyone in the room had turned to watch him. And we all had.

He was gloriously tanned. The short, curly style of his dark hair looked like one of those haircuts he'd have spent some serious bucks on. My ex, Steve, used to frequent those man-salons—hairstyling, massage, skin, nails, the whole works—the kind of place where the cost of services wasn't even listed. If a guy asked how much, he probably wasn't the sort vain enough to spend that kind of money on his appearance. This guy's pale blue board shorts exposed strong, tanned legs, and he carried off the leather sandals in a macho way that few men could in my opinion.

As Mele blurred past the great-looking man, he stopped dead in his tracks, dropping the handle of his carry-on. He looked as if he'd just seen a ghost.

Ona moved then, rushing out after Mele, stopping in front of the new arrival for a few brief seconds to give him a look of complete and utter hatred. 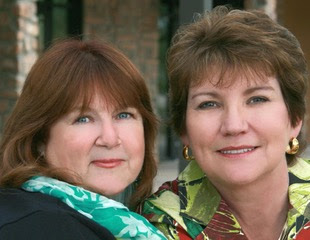 The USA Today best-selling writing team of Sally J. Smith (right brain) and Jean Steffens (left brain) make up equal halves of one totally functional writer’s mind. Creative and intuitive and organized and systematic? What could be better than that?

The two desert dwellers work together side-by-side, literally finishing each other’s sentences, putting together their novels faster and more efficiently than they ever could individually.

When their heads aren’t together over a manuscript, you’ll find them with their families, at a movie, the mall, or out-to-lunch—in the food sense, not the spaced-out sense, well…most of the time. Their current series include Jordan Welsh Mysteries, Mystic Isle Mysteries, Danger Cove Pet Sitter Mysteries, Aloha Lagoon Gabby LeClair Mysteries, and Digby Sloan Mysteries.

http://www//smithandsteffens.com(sign up for their newsletter to receive a free short story)