This post is part of a virtual book tour organized by Goddess Fish Promotions. Andi O'Connor will be
awarding a $20 Amazon/BN GC to a randomly drawn winner via rafflecopter during the tour. Click on the tour banner to see the other stops on the tour.

Fantasy
The Vaelinel Trilogy continues with this absorbing sequel to Silevethiel! Alone and hunted by the Drulaack, Irewen takes advantage of her only option for survival. Pushing her concerns aside, she lets the dead keep her.

But her refuge doesn't last long. Driven out of their hosts by Laegon, a handful Drulaack have returned to the Spirit World. No longer having the protection of the dead, Irewen is forced to return to Vaelinel.

​Finally reunited with her companions, the burdens placed on them are taking their toll. Thoughts of suicide and mistrust plague the company. Slowly unravelling, they must conquer their personal battles before standing against the evil threatening the land.

​For the Corrupter thirsts for revenge. And he'll stop at nothing to satisfy his hunger.

Read an excerpt
Slipping her arm out from beneath her cloak, Irewen reached for her dagger. Her fingertips met the smooth ivory handle, and she paused before sliding them around the hilt and gripping it tightly in her hand. Tears pooled in the corners of her eyes. Silevethiel didn’t need her. No one needed her.


Her breath caught in her throat as reality crashed down upon her.

Oh, but they did.

That was the real cause behind her urge to end her life. They needed her just as much as she needed them. She couldn’t handle the pressure. The fear of failure had consumed her so much she’d rather kill herself than take the risk of not succeeding. This didn’t fall under the adage of ‘if you fail, get up and try again.’ She wasn’t afforded a second chance. She had one opportunity to save her people. If she failed, she didn’t get to try once more.

She squeezed the dagger tighter.

That the world would fall because of her own weakness was the most terrifying thought of all. If she stood against this evil, her chances of victory were slim. She still hadn’t become familiar with her abilities, and she certainly hadn’t mastered anything. So far, she’d been learning as she went. She doubted she’d be able to repeat any magical attacks she’d done in the past.

The word continued to resurface like a villain in a nightmare.

Everything she’d accomplished since leaving Dargon could be contributed to chance. She wasn’t talented. She wasn’t skilled. She wasn’t strong magically, emotionally, or physically. What she’d contributed thus far had been a fluke—powers bestowed upon her because of her mother’s bloodline. They’d surfaced because of the direness of the situations in which she’d found herself, but she he had no idea how to willingly summon her magic. Even now, months after the chase through Mistwood, she still hadn’t been able to duplicate the spell she’d used when she defied orders and rode to aid Silevethiel and the other Guardians.

The dagger felt heavy in her hand. It called to her, daring her to drive it into her heart. She lifted her hand slightly, letting it hover above the ground while she battled the urge to give in.

All these people had faith in her. But she didn’t find that at all reassuring.

She had no faith in herself. 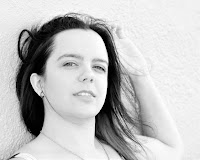 Andi O'Connor is the award-winning author of The Dragonath Chronicles, The Vaelinel Trilogy, and The Legacy of Ilvania. Her critically acclaimed novel, Silevethiel, is the 2015 Best Indie Book Award winner for Science Fiction/Fantasy and the 2015 New Apple Official Selection for Young Adult. Silevethiel was also named to Kirkus Reviews' Best Books of 2013. The Speaker is the 2018 Independent Press Award Winner for Fantasy and a Finalist
in the 11th Annual National Indie Excellence Awards. Andi’s novel, Awakening, is a 2018 Independent Press Award Distinguished Favorite for Fantasy.

You can frequently find Andi as an exhibitor and guest panelist at Comic Cons throughout the country including the Rhode Island Comic Con, Awesome Con, Philcon, Conclave, WizardWorld, and Chessiecon. You can connect with Andi on Facebook, Twitter, and Instagram. For more information, visit Andi’s website.