Labors of an Epic Punk

Mac is an epic punk. No wonder: after his dad went off to fight in the Trojan War and never came back, Mac spent his childhood evading his mom's scumbag suitors—all one-hundred-and-eight of them. Of course, he turned out this way—a moody, friendless sixteen-year-old who blows off work, alienates everyone at school, and pulls pranks. But when he trains a flock of birds to defecate on the headmaster, Mac (short for Telemachus) goes too far. The administrators give him an ultimatum: prove that he's truly the son of Odysseus by doing something heroic—or get out. A school story that just so happens to take place 3,000 years ago, Labors of an Epic Punk is a tale of friendship and transformation, regret and redemption, and a reminder to us all that even heroes need to survive adolescence.

EXCERPT
No one on the field that morning had any idea that all Hades was about to break loose.


Well, one person did.

The stands were over-crammed with students, all chirping away about their summer travels, each one trying to out-fabulous the other. But Mac wasn’t talking to any of them. (No surprise there.)  Instead, he just stared at the empty stage in fist-clenching anticipation. For the entire morning, the entire summer, the entire two years he’d wasted at this gods-forsaken school, he’d been waiting for this moment. His moment of glory, of genius. The

moment when he’d finally and irretrievably cross The Line— that hard-to-define boundary between tolerable and intolerable. Between a week of detention and expulsion. All he needed was for Headmaster Gurgus to blow on that shell.

Just when he thought he couldn’t wait any longer without throwing up, Mac heard the band play the opening notes to “Yielding Never,” Pieridian Academy’s absurdly overblown fight song. The Opening Ceremonies were officially underway. From his seat high up in the stands, Mac watched intently as the members of the so-called Grand Procession marched onto Garthymedes Field: the entire faculty and staff, wearing shiny red gowns and smiles full of phony reverence; followed by the honored students, also in ritualistic red, condescendingly waving at the crowd; followed by a grotesque, nine-headed Hydra.

Lastly, waddling ten paces behind the Hydra, in all his roly-poly, four-hundred pound glory, was Headmaster Gurgus.

Don't forget to come back for the great Giveaway. 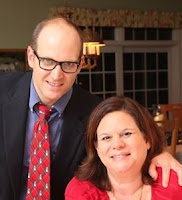 AUTHOR Bio and Links:  Mark and Sheri Dursin will be awarding a $25 Amazon or Barnes and Noble GC to a randomly drawn winner via rafflecopter during the tour.

Check out all of the other Tour Stops