One dark night artist Craig Saxton went missing from his village. His body was found thirty-two hours later in the river, floating like a bobber on a fishing line. 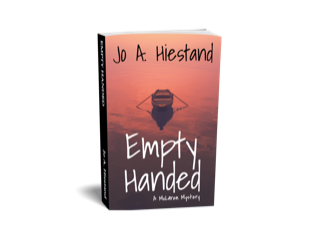 Rumors swell like tidal waves: did his ex-wife or his fiancée’s father kill this likeable young man? Or was it simply a case of jealousy by the village’s other artist? Now, two years later, Craig’s fiancée hopes ex-police detective Michael McLaren can find out.

From speaking to villagers, McLaren quickly realizes that what appears to be a straightforward investigation is fast becoming as tangled as fishing lines. Are the fish poaching incidents, the reappearance of the local ghost, and assaults on him merely to muddy the investigative waters, or are they connected to Craig’s death?

McLaren has his hands full. They become even fuller when a nemesis from his past appears one night, bent on revenge. And the inevitable struggle opens a new future for one man…and leaves the other empty handed.

Learn a little about Jo...


What advice would you give to fledgling authors?


Getting your book read by reviewers and bought by the public is harder than writing it.

There are hundreds of books published each day in the U.S..  Fighting your way through that stack for recognition seems daunting. It will take time to find an audience and to develop a following, but don’t give up. Each new book written not only hones your skill but it also garners you more loyal readers. Hang in there; keep trying. You’re in this for the long term.

Have you ever taught anyone to write?


Actually, a friend and I teach a continuing education class three times a year at the community college. She’s also a St. Louis mystery author. The class is four-hours long and we cover plot, characters, clues, setting, and other parts of the mystery novel writing process.  One woman in the most recent class said she took the class because she’d taken one of my classes on designing book covers, and she learned so much that she came to this mystery writing class.  So, that was a nice confirmation that at least one person got a bit of useful knowledge from a subject I taught.

What do you like to do when you’re not writing?
Most any of my hobbies. I love to sit on my back deck in the spring and autumn, where I read and watch the birds. One of those activities usually runs a poor second to the other, however. But I do love to read (mysteries, British history from the medieval through the Tutor periods, WWII code breaking accounts, most things about nature and the solar system).  And I like to watch birds at the feeders. I love to bake, which I do mainly during the winter. I especially like to make bread—either yeast or quick—and I like making cookies. I’ve created cake and cheesecake recipes, and most are successful the first time, though I’ve produced some major flops! I love music, whether playing my guitar or listening to CDs.  Favorite music is early (medieval and renaissance), Baroque, American and UK folk, bluegrass, and Dixieland.  Walking through the woods and taking photographs is an enjoyable pastime. I used to make patchwork quilts (sew the top and do the hand quilting) but I don’t have my quilting frame anymore, so that’s a former hobby now.  I did crewel embroidery, too. In fact, my Jacobean tree of life still hangs on my living room wall. But, like quilting, that’s relegated to the past: how many pictures or vests can a person use?  A new activity that fascinates me is ancestral research. I’ve traced branches of my family back to Pict kings of Scotland and discovered some interesting relatives throughout the centuries.  Unfortunately, quite a number were murdered or executed—during the tumultuous Scottish clan clashes, Scotland/England battles, or via Henry VIII’s reign.  All in all, I keep busy even when I’m “relaxing.”