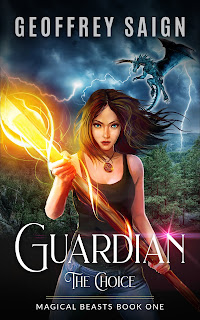 And she fears it's coming for her...

When wildlife prodigy Sam and her crush—quirky handsome Jake—are attacked by a dragon assassin, Sam discovers her secret past. A past connected to a supernatural giant cat and a glowing faerie.

Sam is quickly pulled into a high stakes battle for the world. Everyone, including a creepy ancient villain, wants her supernatural staff, which she doesn’t know how to use. Sophisticated ninja dragons, a kong-sized gorilla, and mysterious beasts offer help—but are they friends or enemies? Sam has a big heart, but will her love for all creatures tear her life apart?

To survive the hardest choice she's ever made, Sam will have to unlock the hidden power inside her.

Ready or not, Sam is about to find out if she has what it takes to be a guardian…

Guardian: The Choice is the new exciting start of a magic-filled fantasy four book series starring a powerful heroine, a tough brawny hero, and a slew of not-so-friendly magical beasts.

Sam and Jake must capture a magical golden dragon—or Jake dies. Can Sam can save the man she loves? And will she have to die to do it?

But everyone wants the golden dragon, including the powerful Evil One, who has been hiding for centuries and has sworn to destroy all of life. No one can be trusted. Death Matches and ancient secrets test the guardians as never before.

Sam fears that whatever she does, she won’t be able to save Jake…nor stop the Evil One.

Guardian: The Choice was selected as Finalist in “Fantasy,” and “Young Adult” category winner!

And Guardian: The Choice was selected as the “Outstanding Young Adult” category winner!

Read an Excerpt from Guardian: The Quest

“What are we running from, Biggie?” yells Jake.

“Uncle Biggie not sure!” The big guy keeps running.

I step on one of the papery skins and slide, and then stumble over a leg bone lying on the ground. I hurtle forward off balance, crashing into the lower section of a giant rib cage.

“Ugh!” My shoulder hurts, but I squeeze between two ribs, run through the chest cavity, and slip out between ribs on the other side. I spot Jake to my left and veer after him.

A rumble fills my ears and I pump my legs faster. I weave around some skeletons and jump over bones scattered on the ground. I risk a glance back. A mass of indistinct shapes is flowing like water through the boneyard, quickly catching up to us.

Something is chasing us. A herd of large somethings.

Up ahead Ridge waves urgently to us. He’s standing beneath a thick, giant skull missing its lower jaw. Cerac must already be inside.

Uncle Biggie races past Ridge with the crocle-lion, ducking beneath the teeth of the upper jaw bone. Jake follows. Ridge must have decided to make a stand there. I’m disappointed and surprised that Biggie and Jake left me behind.

A deep roar splits the air. I check over my shoulder. I was wrong. I’m not being hunted. But something is hunting everything else.

The stampede sounds like a small earthquake and the ground trembles beneath my feet. A writhing mass of monster-sized snakes, lizards, and mammals—some with golden eyes—are jumping, leaping, and crawling in a crazed pattern behind me.

I estimate the distance to Ridge, and how quickly the mass of bodies is moving toward me.

I’m not going to make it.

Geoffrey Saign’s love of wildlife led him to write the award-winning fantasy series, Magical Beasts. He often experiences the magic of nature and wildlife while hiking and swimming. He has a degree in biology and has assisted in field research on hummingbirds and humpback whales.
Geoff loves to sail big boats, hike, and cook—and he infuses all of his writing with his passion for nature. As a swimmer he considers himself fortunate to live in the Land of 10,000 Lakes, Minnesota. See what he’s up to at on his website.

Guardian: The Choice is on sale for $0.99 during the tour: