This post is part of a virtual book tour organized by Goddess Fish Promotions. Kelsey Quick will be awarding a $25 Amazon/BN GC to a randomly drawn winner via rafflecopter during the tour. 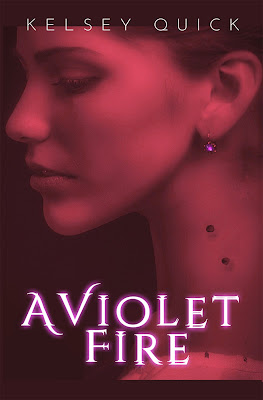 "A vampire tale with a heady mix of defiance and doubt, rebellion and romance." — Kirkus Reviews

"There is not a single dull moment in this book... A Violet Fire has all the ingredients to become the next Hollywood movie about vampires." — Readers' Favorite

"In the Vampire Stratocracy of Cain, human blood is scarce. For centuries, councils have sought to assuage the blood shortage by enslaving and breeding humans, turning them into profitable supply units for the rich and the abled.

Today, eighteen-year-old Wavorly Sterling is officially a supply unit, bound to serve her blood willingly to her master for the rest of her life. One of only few humans that was not bred in Cain, Wavorly knows freedom better than anyone, and she is determined to escape the clutches of her oppressors—despite the allure of forbidden love."

read an excerpt...
He grabs the hair on the back of my neck and pulls down, exposing the breadth. My mind leaps to my years of night terrors; to that vampire from ten years ago; to my mother changing before my eyes into one of the fallen. I nearly forget to breathe while terror floods my veins.

He’s going to turn me into one of them!

“No!  You can’t!” I scream as he lowers his face to the crook of my neck and shoulder, his hot breaths sending chills along my skin—as if each and every inch knows the horror that lies ahead.

My fingers grasp at his immovable arms that have me locked against him. I pull and push with as much might as my hands can muster, to no avail. If I am dirt, he is steel.


AN INTERVIEW WITH KELSEY...

Does this book have a special meaning to you? i.e. where you found the idea, its symbolism, its meaning, who you dedicated it to, what made you want to write it?
This book has a special meaning to me in that I’ve been passionate about the idea for over a decade. I first thought of it while sitting in art class in 9th grade—a freshman in high school! It’s also special to me because without my fanfiction fans, I never would have gathered the confidence to write it. They are the subject of my dedication page, and number one in the acknowledgements section at the back of the book. The meaning, symbolism, and themes came to me while I was drafting. Many of those things were developed based on current issues. I knew my subject matter had to be relevant if I wanted it to stand a chance in such a crowded marketplace.
Where do you get your storylines from?
I imagine every day scenarios happening in my life on a greater and much more coincidental scale. If I can see a beginning and an end within a few moments and it makes me excited enough to think about it more, I put it in the vault with the rest of the ideas.
Was this book easier or more difficult to write than others?  Why?
This was my very first book to write! So, I’m unsure. However, I have found that with other projects I’ve started in the meantime, it is much harder to stay passionate about them than this one. I think A Violet Fire just holds so much sentimental and motivational value that it was easier. In fact, it’s because of this book and so badly wanting it to be published that I would get side-tracked from other projects. I think that’s also the main reason why I didn’t shelve it and work on a new manuscript to query. I needed to get it out into the world so I could focus.
Do you only write one genre?
I thought I would always write fantasy, but I’m finding a couple of contemporary ideas especially enchanting right now. So, no. I guess I don’t! 😊
Give us a picture of where you write, where you compose these words…is it Starbucks, a den, a garden…we want to know your inner sanctum?
It really depends! I hate routine when it comes to doing anything, but I do need a couple of details to be consistent for me to have the best writing experience. Here is a list of things I must have to write no matter what:
1.       Change in scenery — I cannot write in the same place all the time. I’ve been known to write at four different coffee shops, a couple of sports bars, and at my desk. All of them are in a “whatever feels best for my muse right now” rotation.
2.       Drinks — It’s either coffee or wine, but regardless I am usually in a place that serves one of these beverages (if not my own home), and I will always have something to sip on if I’m writing.
3.       Music —I need music to write, and usually I will make playlists that go along with the certain feel or aesthetic of a project. It throws off everything if the music isn’t consistent with the subject matter.
And finally, of course…was there any specific event or circumstance that made you want to be a writer?
When I entered my 24 page manga into an official Japanese contest and received the feedback that I would essentially never be a professional manga artist (which I pretty much knew, I just wanted to try), I assumed that my idea for A Violet Fire would be shelved forever. Then one day in 2015, I had received enough positive reviews and urges to become an author from my first try at fanfiction that I wondered. When I went back and looked at my word count (over 100k words in less than 6 months), my jaw dropped. I never thought I could write that much; I’d always assumed that kind of word count was just outside my realm of possibility. Soon after, I turned to my husband and said, “I wonder if I could turn this vampire idea of mine into a novel…” And that was probably the turning point for me. 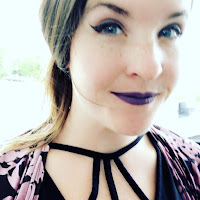 Kelsey Quick is a novelist, artist, and businesswoman who loves her husband, huskies, and video games. Since the age of two, Kelsey has been bound and determined to create. From traditional impressionist paintings, to digital comic creation; from fanfiction to full-length novels… her desire for crisp and prime escapism is never-ending. A Violet Fire is her debut novel, harboring the idea she’s had and held dear to her heart for over a decade.