A Struggle for Independence

This post is part of a virtual book tour organized by Goddess Fish Promotions.
p. m. Terrell will be awarding a $25 Amazon/BN GC to a randomly drawn winner via rafflecopter during the tour. 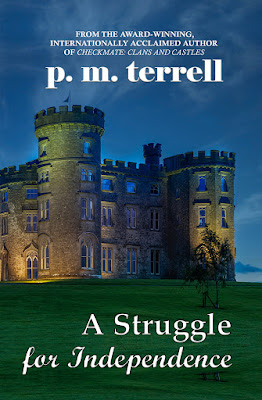 Sometimes a woman comes to the realization that she has built the perfect life but with the wrong man.


It is 1916 Ireland, and Independence Mather has settled into a tedious routine in an arranged marriage when she meets an architect hired to add a wing onto her husband’s vast estate. She soon falls in love with the charming, attentive Nicky Bowers, but he has secrets to hide. When she discovers he is an Irish rebel, events propel her into the middle of the Easter Rising. Now she must decide whether to remain the wife of a British loyalist or risk everything to join the rebellion and be with the man she loves.

read an excerpt...
I think when all is said and done, I prefer to sleep when the rains are upon me. There is something about curling up beneath layers of warm, cozy covers and listening to the raindrops against the glass or even the stronger pelting storms with their thunder and lightning that cause me to become lulled to contented sleep. But on nights like this, when the air is still and silent, time becomes stuck, and I feel suspended in wakefulness while sleep gathers just beyond my reach.

I rose, sliding my feet into my slippers and donning my robe to tread across the cold floor and poke the peat in the firebox. It was stubborn tonight; seeking the same slumber that evaded me, the remnants of earlier flames nothing more than a spark and a flicker. I finally gave up and began to make my way back to my bed, where warmth, if not sleep, awaited me. I paused at the window to note the frost forming in the lower corner, a late frost that could damage the flowers just beginning to bud to officially herald the spring and promise of summer. The skies were clear, the customary clouds nowhere in sight, the half-moon brilliant even though we were midway between full moons.

A flash caught my eye, and I turned my attention from the night sky to the ground below. I spotted it again, a glint and a glimmer, and it was gone as quickly as it had appeared. Forgetting the chill for the moment, I strained my eyes as I peered into the shadows, the moon unable to penetrate the copses of trees between the great house and the structures beyond the meadow.

I tried to pinpoint where the flashes were occurring and came to the conclusion they were at the old barn across from my little studio cottage. I thought vaguely of Stratford, asleep and snoring in his room down the hall, and knew I would not awaken him to the possibility of trespassers, nor would I rouse the servants from their beds. Completely and fully awake now, I felt my senses pricking at my mind, urging me to venture there myself.

I dressed quickly in dark clothing and carried my heavier shoes in my arms as I slipped outside my bedchamber and quietly closed the door behind me. The corridor was dark, and I groped at the walls as I made my way away from Stratford and down the stairs. The house was surreally quiet, objects that seemed ordinary or innocuous during the daytime, suddenly morphing into ghostly beings that loomed over the rooms to watch my departure from the house and into the chill of the night. 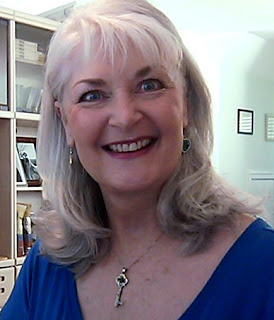 Prior to writing full-time, she founded two computer companies in the Washington, DC Metropolitan Area: McClelland Enterprises, Inc. and Continental Software Development Corporation. Among her clients were the Central Intelligence Agency, United States Secret Service, U.S. Information Agency, and Department of Defense. Her specialties were in the detection of white collar computer crimes and computer intelligence.

A full-time author since 2002, Black Swamp Mysteries was her first series, inspired by the success of Exit 22, released in 2008. Vicki’s Key was a top five finalist in the 2012 International Book Awards and 2012 USA Book Awards nominee, and The Pendulum Files was a national finalist for the Best Cover of the Year in 2014. Her second series, Ryan O’Clery Suspense, is also award-winning. The Tempest Murders (Book 1) was one of four finalists in the 2013 International Book Awards, cross-genre category. Her historical suspense, River Passage, was a 2010 Best Fiction and Drama Winner. It was determined to be so historically accurate that a copy of the book resides at the Nashville Government Metropolitan Archives in Nashville, Tennessee. Songbirds are Free is her bestselling book to date; it is inspired by the true story of Mary Neely, who was captured in 1780 by Shawnee warriors near Fort Nashborough (now Nashville, TN).

She was the co-founder of The Book ‘Em Foundation, an organization committed to raising public awareness of the correlation between high crime rates and high illiteracy rates. She was the founder of Book ‘Em North Carolina, an annual event held in the town of Lumberton, North Carolina, to raise funds to increase literacy and reduce crime and served as its chairperson and organizer for its first four years. She also served on the boards of the Friends of the Robeson County (NC) Public Library, the Robeson County (NC) Arts Council, Virginia Crime Stoppers and became the first female president of the Chesterfield County-Colonial Heights Crime Solvers in Virginia.

A Struggle for Independence has special meaning to me because it takes place against the backdrop of Ireland’s fight for independence. My ancestors are from Ireland, and a few years ago, I had the life-changing experience of standing on the land they once walked and owned. Many have controlled Irish lands, including the Vikings and the British, but they never vanquished their enthusiasm for life, their courage, their hope and their faith in a better tomorrow.
The book also is personal to me because it tells the story of Lady Independence Mather, who begins in an oppressed, arranged, and loveless marriage but who comes into her own in the chaos of the Easter Rising. I belong to a generation of women that fought hard for equality and were often underestimated. I wanted to show younger generations that the rights we fought for should never be taken for granted.

I get my story ideas through historical events. This book was inspired by the events leading up to and through the 1916 Easter Rising, which ultimately led to Ireland’s independence. I was fascinated by the leaders, many of whom were poets, authors, and actors with no military training. They were ordinary people with an extraordinary goal: to fight back against one of the world’s most significant powers, and win.

Whenever I write a historical book, even with a fictional storyline, I work hard to remain faithful to historical facts. That meant researching 3-4 hours for each hour of writing. I began with Internet research on sites associated with universities, historical societies, museums, and nonprofits dedicated to preserving Irish history. I then traveled to the places I wrote about. That meant standing in the courtyard where the leaders of the Easter Rising were executed without public trial, walking on the grounds of Dublin Castle and the General Post Office, and strolling through Saint Stephen’s Green, all places in which bloody battles were fought during Easter week 1916.

My inner sanctum is an office with 360-degree views. Beside my desk is an aquarium divided into apartments for bettas. It is a peaceful, tranquil place where I can escape into the era and setting of my characters.

I have wanted to be a writer since I was nine years old. The school principal encouraged me to write, and after I completed that first story written on pieces of cardboard, I was hooked. I have written ever since, but publication and success came much later.