Richard Hacker will be awarding a $25 Amazon/BN GC to a randomly drawn winner via rafflecopter during the tour. 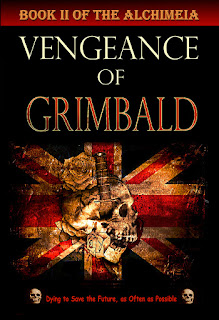 Addison and Jules, members of the League, a secret alchemist society of Inkers who protect the time continuum, believe they defeated their enemy, Cuthbert Grimwald, known to them as Kairos. When he resurfaces filled with vengeance, intent on destroying the League, and acquiring the Alchimeia, a book of such power the League has hidden it for millennia, Grimwald leaves a path of destruction across centuries. As he quests for absolute control of reality, Addison and Jules pursue him through time and death in a desperate struggle to save the world from his vengeance.

read an excerpt...
Addison glared at her.

“You inked in, blind to everything around you. You were so focused on getting revenge you forgot why we were there.”

“Okay, I screwed up. Is that what you want to hear?”

They locked eyes, Jules wanting her partner back, Addison not yet able to give her what she wanted.

“Come on, Jules. Give it a rest. Feels like the damned Inquisition.”

“We inked into the Inquisition, so we both know how much your exaggerating right now. It’s about me. What did Kairos’ minion mean when he said you loved another Jules?”

“He was crazy. Ranting. I don’t know what he meant.”

Jules studied him, sitting back, arms crossed. “I’m not saying you’re lying to me, but you are holding something back. Something significant enough for you to lose control like you did under the citadel. We’re partners, Addison. Whatever goes on in your head effects both of us. Secrets lead to lies on top of more secrets. Secrets corrode relationships.

“There is no secret, Jules.”

“Okay. But if there is, I hope you won’t wait until it’s too late to tell me. 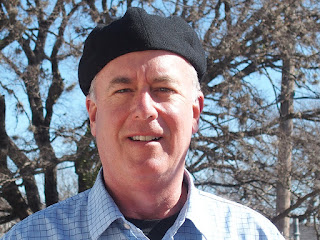 Richard Hacker, lives and writes in Seattle, Washington after living many years in Austin, Texas. In addition to the science fiction/fantasy novels of The Alchimeía Series, his crime novels ride the thin line between fact and fiction in Texas. Along the way, his writing has been recognized by the Writer’s League of Texas and the Pacific Northwest Writers Association. As a judge in literary contests shuch as PNWA and ChicLit, and as a freelance development editor, he enjoys the opportunity to work with other writers. In addition, he is the Sci-Fi/Fantasy editor for the Del Sol Review. DIE BACK was his first novel in the Alchimeia series.

Other books by Richard Hacker:

more "personal stuff" about Richard Hacker...
Does this book have a special meaning to you? i.e. where you found the idea, its symbolism, its meaning, who you dedicated it to, what made you want to write it?


Thanks for having me on the blog. Yes, this second book in the Alchimeia series does have a special place in my heart. If you check out the dedication you’ll see it reads, “Welcome to the world, Brazos.” We welcomed a new grandchild into the family and so I wanted to dedicate this one to him.
I think what led me to write Vengeance of Grimbald and the first in the series, Die Back, was the initial concept of reality itself becoming shifting ground. With each twist of the time continuum, some elements remain while others disappear. Sometimes the changes are almost insignificant and other times the transformation has global consequences. And what happens to a person when all the moorings to their reality keep shifting and moving? It’s fertile ground for exploring a character’s courage and perseverance in the face of insurmountable odds.

Where do you get your storylines from?
Some would say the dark corners of a twisted mind! LOL. The reality of it is that sometimes I get captured by an idea and sometimes I write myself into it. Often, it’s a combination of both. With the Alchimeia series, I began with with a fountain pen. I was holding a fountain pen one day and my mind wandered to the power of words. Human beings have been naming things since the beginnings of language. It’s how we find our place in the world and in some cases I think, gives us a sense of control. Or at least the illusion of control. So, what would happen if a character had a pen filled with alchemical ink that when he wrote the name and a date for someone living in the past, his consciousness would be transported into that person? What would he do with that astounding capability? And as with most technology, what if someone decided to use the alchemy to acquire power and control time itself? How would the protagonist fend off this attack on the time continuum and reality as he knows it? And then I put the fountain pen down, pulled at the laptop, and started writing.

Was this book easier or more difficult to write than others?  Why?
The first book in the series, Die Back was challenging due to plot complexity and shifting reality. Vengeance of Grimbald cranks those elements up several notches!
The story goes all over the world, past, present, and future such as ancient Egypt; 19th century Alexandria; WWII Belgium; an altered present-day Seattle and Tokelau Atoll in the Pacific; 1940’s Padang, West Sumatra; 17th century Delft, Dutch Republic; and Cromwell’s England. As the story in Book 2 unfolds the time continuum once again shifts, sometimes with subtle changes and sometimes with radical shifts in culture and technology. And my characters have to play on this multi-dimensional chessboard. So, I’m sure you can imagine, I had to be structured to the point of working from an outline and making notes to myself at the end of each writing session to keep me oriented.
I also found early on that I needed to make the ‘inking’ scenes, when Addison and his cohorts transport their conscious awareness into the mind of someone who lived and died in the past. To make that distinction, you’ll notice how the present is written in third person, but the inking scenes in the past shift to first person from the inker’s perspective. Not only does the shift in perspective help the reader distinguish between the two realities, first person also gives those scenes more presence. The reader is inside the story versus observing to the side.

Do you only write one genre?
My first novel, which is yet to be published (although I’m hoping to make that happen this year) is humorous sci-fi along the lines of Douglas Adams or Tom Holt. So look for THE BIFURCATION OF DUNGSTEN CREASE in the future. The next three published novels were a series of crime stories, something like an Elmore Leonard story, set in Central Texas where I had lived for many years. KILL’T DEAD OR WORSE is the first in that series. Then I shifted to slipstream, leaning into sci-fi and historical fiction with the Alchimeia books. I tend to write what jazzes me in the moment. Each genre has its own challenges and joys.

Give us a picture of where you write, where you compose these words…is it Starbucks, a den, a garden…we want to know your inner sanctum?
I have writer friends who have to be in certain places or eating certain foods or drinking a double latte. I’ve made a conscious effort to write anywhere, at any time. I’ve written on trains, planes, cars, buses; in coffee shops, restaurants, malls, churches, park benches, bathrooms, stadium stands; at all times of day and night. There’s a thing with urban sketching that you always carry a pencil and sketchbook with you so you’re always ready to draw. I try to keep a small notebook and the laptop close. You never know when an idea will come to you.

And finally, of course…was there any specific event or circumstance that made you want to be a writer?
I’ve always enjoyed story telling. I used to bring short stories to school for show and tell when other kids were bringing turtles. The roots of my attraction to storytelling is probably my dad. He was a voracious reader. Every Saturday I’d go with him to the library where I’d come out with my stack of books for the week. We didn’t talk about it, but his actions communicated a respect for the value of the written word. I got the message. I tried to keep writing as I grew into adulthood, but as most of us discover, the responsibilities of life can get in the way of pursuing our art. So I spent many years making a living and not writing creatively. About ten years ago, I made a shift and have been able to focus on my writing, as well as other artistic endeavors.
Thanks for having me on the blog. And thank you readers for being here! I hope you’ll check out DIE BACK and now book 2 of the Alchimeia, VENGEANCE OF GRIMBALD. Both are available on Amazon. And you can find me at www.richardhacker.com or on Facebook at www.facebook.com/RWHacker