This post is part of a virtual book tour organized by Goddess Fish Promotions.
Olga Werby will be awarding a $25 Amazon/BN GC to a randomly drawn winner via rafflecopter during the tour. 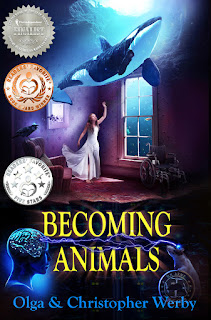 Humans have always wanted to know what goes on inside the minds of other animals. But what if humans could become animals? Toby’s father leads a team of neuroscientists directly connecting the brains of humans with those of animals. And Toby is a prodigy at throwing her mind into the animal subjects in his lab—she’s the best there is.

But Toby suffers from cystic fibrosis and she’s not likely to live into adulthood. Could a radical plan to embed her consciousness into an animal allow Toby to survive? And what does it mean to live without a human body?

Can Toby and her father solve the problem of fully merging two beings before she takes her last breath? Will the government succeed in stopping their efforts before they are done? It’s a race against death and into the minds of animals.

After the major had left, Toby came into Will’s office and slipped onto his lap.

“I’d like to go to work in the lab with you and Ruffy,” she said.

“You heard?” Will asked, gently rubbing the girl’s back.

“School is boring,” Toby said. “And I like playing with Rufus,” she added. She was convincing herself as much as him, Will noted.

Toby didn’t say she’d miss playing with the other kids. Friendships needed plenty of time and some freedom. She was so restricted with her interactions and she missed so much school, she hadn’t gotten to make friends. Will felt the weight of responsibility. Could he keep his little girl happy? Was this the right thing for her?

“You’ll get a lot of time to play with Rufus,” he said. “But maybe you’ll get bored hanging around with us and all those lab rats.”

“There will be more soon. Now that we had a breakthrough, I’m sure we’ll get more animals, more different kinds of animals. But we’ll take it slow. I’ll make sure no one pushes you to do things you don’t want to do. I promise.”

Will hugged his daughter and he felt how fast her heart was beating. Almost as fast as Ruffy’s.

Olga Werby, Ed.D., has a Doctorate from U.C. Berkeley with a focus on designing online learning experiences. She has a Master's degree from U.C. Berkeley in Education of Math, Science, and Technology. She has been creating computer-based projects since 1981 with organizations such as NASA (where she worked on the Pioneer Venus project), Addison-Wesley, and the Princeton Review. Olga has a B.A. degree in Mathematics and Astrophysics from Columbia University. She became an accidental science fiction indie writer about a decade ago, with her first book, "Suddenly Paris," which was based on then fairly novel idea of virtual universes. Her next story, "The FATOFF Conspiracy," was a horror story about fat, government bureaucracy, and body image. She writes about characters that rarely get represented in science fiction stories -- homeless kids, refugees, handicapped, autistic individuals -- the social underdogs of our world. Her stories are based in real science, which is admittedly stretched to the very limit of possible. She has published almost a dozen fiction books to date and has won many awards for her writings. Her short fiction has been featured in several issues of "Alien Dimensions Magazine," "600 second saga," "Graveyard Girls," "Kyanite Press' Fables and Fairy Tales," "The Carmen Online Theater Group's Chronicles of Terror," with many more stories freely available on her blog, Interfaces.com.

I like to write about people who live on the margins of our society. Toby, the main character in this story, is dying from cystic fibrosis. We get to watch her get sicker and sicker as the story progresses and empathize with her suffering. There is a lot of moral ambiguity in this book, but I hope the readers go along and see why the choices were made as they were. I think books teach empathy – we get to live another’s life through the words on the page. That’s very powerful.

Where do you get your storylines?

Stories usually start with just a tiny idea and then grow as I collect research around that topic. A few years down the line, the little clump of thoughts jells into an idea for a book. But I never know if the book will become a full-length novel or a novella or even a longish short story. I’m a “pantser” – I write without an outline. I just have a ton of research and random thoughts written down on little notes in my note-taking software. I have to feel my way towards the resolution of a story. The more research I do, the better the outcome.

“Becoming Animals” was a difficult book to write. It is based on a lot science – all the scientific details described in this story are true, even if they are pushed to the limit of what’s possible. When you read about how a rat responds to danger or how a whale mourns its baby or how a young piglet gets the zoomies, it’s all real. The fictional part is how a human girl responds to experiences that are unique to other animals.

I write science fiction – basically fiction with a ton of science. I have written fiction that was more fantastical (less science-y), but I prefer to write about real science. One of the easiest ways to learn is through stories. Humans are wired to enjoy and remember them. Science fiction tells stories about the future or alternative history or some other “what if” scenarios that involve real science pushed to the limit. While entertainment is a perfectly valid goal in itself, sometimes a good story can do more than entertain.

I write at my desk, in a spare bedroom that we turned into an office. I’m surrounded by books and the surface of my desk is covered with loose papers full of squiggly notes and fiddly toys. But my computer monitor and what’s on it is just as important as what’s in a physical space around me. I work in a text editor – it’s simple text, no formatting at all, no distractions. I have a note taking application running as well – I have years’ worth of research that I do before starting a story, so I need to have that at my fingertips. I have a web browser open on a dictionary page. And I have iTunes with a soundtrack for my book (each book has its own soundtrack).

Funny. There was one particular event…among many. I wrote fan fiction as a kid for stories I loved and couldn’t get enough of. But it was “Twilight” that pushed me towards actually penning an entire complete novel – “Suddenly, Paris.” I saw a kid at school -- a girl who I’ve never seen reading a single thing ever – pick up “Twilight” and not put it down until the end. I wanted to know why? Why was this story so compelling to this kid? What gripped her? What made her read a thick book to the end? Interestingly, when I read that novel, I was angry at the abusive relationship described…and yet I still found it compelling. So I decided to write a compelling story where the heroine was not a wet blanket or in an abusive relationship. The result was my first novel: “Suddenly, Paris.”

“Suddenly, Paris”: What if the world is not made out of atoms? Would it change your high school experience? Would it change how you love? This story focuses on a high school student, Julie Vorov, who suddenly learns something about herself and that turns her world upside down. This book was placed on the Long List for The James Tiptree Jr. Award in 2016. You can read the first few chapters here: https://interfaces.com/blog/suddenly-paris/

“Coding Peter” is a sequel to “Suddenly, Paris.” It tells the story of Julie’s younger brother Peter. Peter has some very difficult choices to make. Would he be pressed to make the right ones? Read the first few chapters here: https://interfaces.com/blog/coding-peter/

Who is your favorite character that is still writing?

Thanks for taking time to share your book with us and it's always a pleasure in our family to learn about a new one.

Thank you very much for sharing my story with your readers!

Congrats on your book release.

I liked the excerpt, sounds good.

How did you come up with the title of the book?

How did you come up with the title of the book?

Do you have any ideas for your next book?

I love the cover!