This post is part of a virtual book tour organized by Goddess Fish Promotions. Marilynn Larew will be awarding a $10 Amazon or B/N GC to a randomly drawn winner via rafflecopter during the tour. See below to sign up for the GIVEAWAY and for all other stops on the tour. 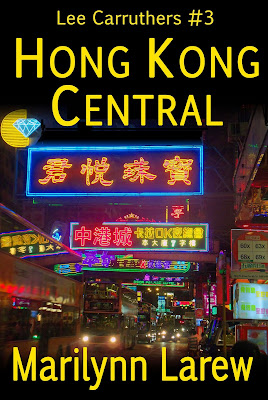 Despite the fact that she quit the CIA, Lee Carruthers is in Hong Kong doing a little job for Sidney Worthington. He’s thinks something is wrong at Wong’s Antiques. Lee finds Henry Wong—just as he’s being kidnapped by the Chau Fong Triad. What does a Triad want with an antiquities dealer? That’s one of many questions, as Lee reunites with an old lover, is caught in the middle of burgeoning democracy demonstrations, and uncovers secrets that may once again upend her life.

MY REVIEW
Because of the intense opening chase scene in this book, it took me a while to realize that the main character was a female rather than a male. This might seem like a criticism, but it isn’t. As I said, the opening of the book was so action-packed that I might have missed a nuance or hint because I was reading so fast. Nonetheless, I caught up eventually and realized this is a good book about a retired CIA agent named Lee Carruthers, a female Lee Carruthers. Retired or not, Lee continues to get called for assignments by her handler, Sydney. This time she ends up in Hong Kong. Sydney has asked her to look for a contact that has stopped checking in; an antiques dealer. Lee begins to realize that there is more to the story than she was told and finds that the antiques dealer’s mother was a friend of a lot of people back in the Vietnam War. I say “friend”, but it would be more clear to say it like it is. She, Jenny, sort of slept around. So, who slept with Jenny, Lee’s dad? His buddies? Sydney? Her female friend? Almost everyone? Lee’s not sure if she’s looking for a friend or a half-brother?

This was an easy read with good strong characters. There were even a few so well-defined that I had a picture in my mind of what each one looked like. It was vivid, like the chase scene at the beginning of the book. I will say, I thought she sure looked for the contact, Henry Wong, and worried about the Triad an awfully long time in this book. It did seem to slump a little in the middle. But I enjoyed the story and I sure didn’t regret reading it.

This is Book 3 in a series titled Lee Carruthers series. All have good reviews. Check them out.

Read and excerpt...
Hong Kong never sleeps. It was almost midnight, and the traffic was heavy, the neon signs flashing on and off, but Upper Lascar Row was quiet, the tables of tourist junk pulled inside the shops for the night. I walked softly in the shadows on the right side of the cobblestone street, looking for Wong Antiques among the red-lacquered shop fronts with signs in Chinese and English picked out in gold. The hairs on the back of my neck were prickling as if someone were watching me, and I jumped when a cat crossed the road. How could anybody be following me? I only got to Hong Kong three hours ago.


In the dim light, I saw Wong Antiques halfway up the block on the left-hand side. The only light showing was in the back, a nightlight or an office. I had crossed the street to the shop and had rung the bell once when I heard footsteps coming up the street. I slipped back across the street and melted into the doorway of a shop. Someone turned the light on in the antique shop, and a thin man wearing a blue scholar’s robe walked to the door. Henry Wong? The footsteps I heard materialized as two large men in suits. They banged on the door, and the man backed up. They banged on the door again, and he opened it unwillingly. The men were Chinese, bulky in the way a fighter is bulky, probably showing tattoos under their white shirts.

MARILYNN LAREW is a historian who has published in such diverse fields as American colonial and architectural history, Vietnamese military history, and terrorism, and has taught 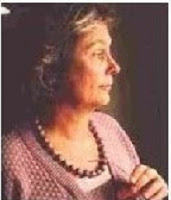 courses in each of them in the University of Maryland System.

This is the third volume in the Lee Carruthers series. She has also published Aftermath, in which the protagonist, Anne Carter, is a 1980 Baltimore PI, working in the wake of the Vietnamese War.

She lives with her husband in a 200-year-old brick farmhouse on the Mason-Dixon Line in southern Pennsylvania. She belongs to Sisters in Crime, Guppies, and Chinese Military History Society.

Check out these stops on the Tour