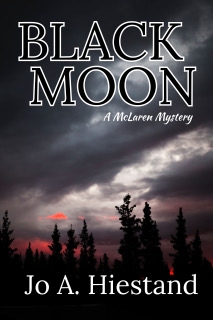 Each April the members of a mystery writing group gather on Stanton Moon for camaraderie and to fuel their plots. The moody area seems the perfect setting for hatching a whodunit. Unfortunately, an unscripted mystery materializes like an unsolicited manuscript on a publisher’s slush pile—the leader of their group is found on the moor, her head bashed in and very dead.

Lesley Keeton’s murder takes on the aspects of a novel’s first draft: the suspects shadowy and the killer unnamed. Now, a year later, ex-police detective Michael McLaren is asked to tidy up the plot and expose the killer.

McLaren investigates and discovers anger and jealousy cropping up as often as editor’s red marks on a manuscript page. The group members crafted more than stories—they planned a mass exodus, fleeing Lesley’s tutelage, dictatorship and tongue lashings. Add a tinge of blackmail, an illegal business and an affair to this framework, and the deadly combination has the earmarks of a bestseller.

In the midst of this, McLaren’s lady friend arrives unannounced and disrupts the case…and unbalances his emotions. Both are tested one dark night in a churchyard when she stumbles into the arms of the killer…and McLaren must rescue her without letting evil go free.

my review...
Black Moon is the 11th book in Jo Hiestand’s “McLaren Mysteries”. I’ve loved all 11 books, but somehow this book is a little different. It has her classic talent for character description and beautiful descriptive writing, but somehow this is deeper, more fun, lighter, and yet intense. I am aware these all sound like contradictions but there are some additions and some humor as well as a little attraction and as always, McLaren has a new case to solve.

This time the murder case is centered around a writer’s group and it makes such a fun read for those of us who have always dreamed of writing a book. The setting is as interesting as the characters. Stanton Moor is where the writer’s retreat is held each year and we see its beauty through the author. Some of the retreat writers are accomplished and published while others are only hopefuls. You surely know that success can breed contempt, right?

Hiestand has brought back a visit from Melanie, a character in a previous book. Since Melanie is interested in McLaren, it seems as if we get a deeper picture of him. By getting to know one another, we are reminded of his background, his past relationships, as well as his hardships. Of course, Jamie, McLaren’s high-profile cop buddy, is present as always making one funny crack after another but among the many people McLaren interviews is a new character. One I liked from the onset. His name is Holton Lacey and he’s a retired cop and get this…he writes cozies. Cute huh? I loved his straight-forward cop ways along with his hidden secret. A male cop cozy writer. It doesn’t get better than that.

If you have read any of my reviews of this McLaren series, you will know I am a huge fan of Hiestand’s character definition. She makes them seem so real. It isn’t just that you can picture them. She writes so well you begin to feel what they feel; almost think like they think.

The above description makes it clear this book can be read as a stand-alone. However, after you read it, you’re going to want to go right back to Book 1 and read them all.

The car park was empty, the pub having closed at midnight. A small lamp shone in the multi-paned front window, throwing numerous rectangles of yellow-tinted light onto the ground. He would avoid that area.

McLaren found an exuberant spruce wallowing in darkness near the corner of the building. A perfect spot to eavesdrop and see. He slid between the evergreen and the wall, hidden from whatever direction the delivery bloke might come.

The tree branches swayed as he settled in for his fifteen-minute wait, and he prayed the employee wasn’t staring in this direction. McLaren leaned against the building. The stone was cold on his back and pressed into his flesh. At least it’ll keep me awake, he thought. He eased a bough off his shoulder, eliminating the prickling of the needles, and hoped, not for the first time, that he’d interpreted the earlier conversation correctly.

A gust of wind slammed into the spruce, dislodging some needles. They fell onto McLaren’s head and arms, and peppered his neck where his jacket collar was open. He flinched but didn’t dare move. A rumble of thunder rolled overhead. Seconds later, the clouds burst. Rain pelted the tree and collected between rows of needles before topping the confinements and falling. It soaked his hair and trickled into his ears, ran down his neck and dampened his shirt. Rain angled through the space between the boughs and showered his face and hands. Aromas of damp wood, earth and stone saturated the air.

He angled his watch face. Five minutes to one. He held the collar of his jacket closer to his neck and wiped the rain from his eyes.

Lightning corkscrewed across the sky and ripped the clouds. A blast of wind drove the rain through the tree and against the pub. Water coursed down the walls and overflowed the gutters. McLaren tried to lean farther into the tree, away from the wall, wanting to avoid the soaking, but the density of the boughs near the trunk thwarted his movement. He gave up, silently cursing his situation, and sagged against the wall.

The pinprick of two headlights came to him before he heard the vehicle’s motor. Instinct forced him closer to the tree trunk, although he realized later that the tangle of boughs and his dark clothing made him indistinguishable from the spruce. The car slowed as it neared the pub, and McLaren slowed his breathing, afraid he’d be heard. The vehicle paused, as though the driver was checking if the establishment was open for business. Or if the one o’clock rendezvous was still on.

Another growl of thunder drowned out the sound of the idling motor. The driver made no move to drive on or exit the car. He seemed content to sit and wait. For what?

McLaren craned his head so he could see the vehicle better. It was angled just enough on the road so its shape was visible in the lightning flashes. It was an SUV.

He wiped the rain from his eyes, leaning forward as though another few inches would correct what he saw. No light lorry or van sat on the tarmac, nothing large that would denote it was about to deliver kegs of beer. He stared at the car.

He sank back against the pub’s wall as the vehicle inched forward. Puddles on the road and in the small depressions of the ground threw back the brightness of the headlights’ beams, and he diverted his gaze. The SUV was close enough now that he could hear the roughness of the motor. Still, the driver didn’t park or leave the vehicle, and McLaren wondered if he had rung up someone on his mobile and was waiting either for an answer or for the employee’s appearance.

A fresh dumping of rain assaulted the area before the car eased past the pub. It waited until it inched past the stand of trees harboring McLaren’s car before it picked up speed and faded into the night.

McLaren stepped into the open, oblivious to the spruce boughs brushing against his back. He stared at his watch. One-twenty. Surely the delivery would’ve been made by now if it was going to happen. Had the driver who stopped in his car just now phoned to find out why no one was there? Was he told the delivery time or date had been changed and he should come back another time? Surely they hadn’t seen McLaren and called it off. 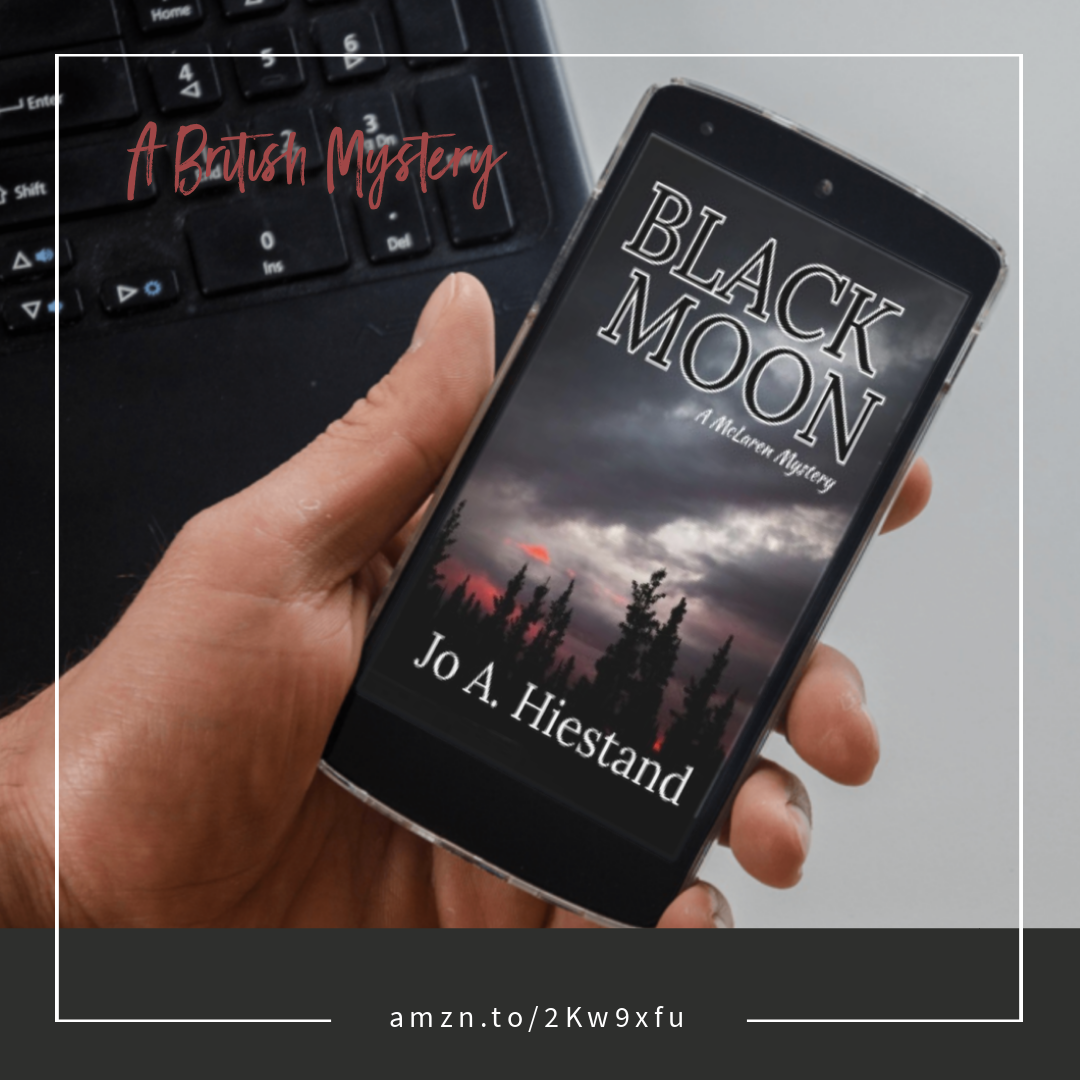 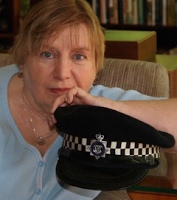 A month-long trip to England during her college years introduced Jo to the joys of Things British. Since then, she has been lured back nearly a dozen times and lived there during her professional folksinging stint.

Jo’s insistence for accuracy--from police methods and location layout to the general “feel” of the area--has driven her innumerable times to Derbyshire for research. These explorations and conferences with police friends provide the details filling both her Peak District mysteries and the McLaren mystery series.

In 1999 Jo returned to Webster University to major in English. She graduated in 2001 with a BA degree and departmental honors.