Paddy Tyrrell will be awarding a $20 Amazon/BN GC to a randomly drawn winner via rafflecopter during the tour. A generation designed by sorcery to destroy your people. Two races mired in conflict. Can a pair of outcasts unite them against an enemy who would enslave them all?

The birth of ‘bronzite’ babies in Lumina heralds the onset of war. The people take fright at the golden children and banish them from the land. A dangerous move. King Zheldar, commander of the black dragon, is attacking Luman borders. If he wins bronzite support for his army of monsters, Lumina is lost.

Davron Berates cannot share his people’s hatred of the children and, on discovering he has a bronzite brother, sets out to find him. At his side travels Chrystala. A bronzite, she has twice his strength and three times his determination.

When the black dragon kidnaps Chrystala, Davron is faced with a terrible choice: save his friend or save his nation.

“We go.” Teibera padded to the mouth of the cave. “Meet cubs.”

He raised his head, ears back, closed his eyes and howled a message into the hills. Two white shapes flashed in the distance. The first to arrive shuddered to a halt on sight of the stranger. He was larger than she had ever imagined a wolf could be. Tall and strong, he panted from the race and sized her up with eyes of chestnut brown. His nose twitched to catch her scent.

With a flurry of leaves, a second snow-wolf appeared. Salazai’s heart stopped.

“Smallest daughter, Sapphire,” Teibera said proudly. Amber eyes, tipped with snow-white lashes, stared at Salazai. The young wolf’s face was as delicate as the seed puffs that floated in the air around her, her nose black and shiny with health. Her fur was white, only the ears laced with a fringe of gray.

She stared at Salazai and asked, “Our pack?” Salazai glanced at Teibera, who gave a short bark of acknowledgement.

The snow-wolf padded forward and licked her legs. Salazai put out her hand, and Sapphire held it gently between her jaws. Salazai stayed calm. It seemed easy to give this animal the trust she begrudged her own people. The wolf released her hand, sniffed her clothes, and licked her face. With her finger, Salazai touched a mark that hung like a black teardrop beneath the snow-wolf‘s eye.

I was raised in Kent, the garden of England, and lived in an Oast House whose round rooms were once used for drying hops. Must be why I’ve enjoyed a drink ever since! 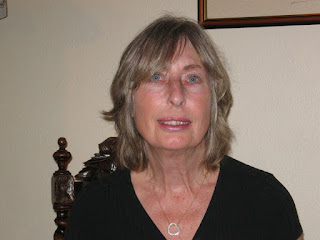 At university, I fell in love with medieval French writing, discovered The Gormenghast Trilogy, and became hooked on fantasy.

I have sailed down the Yangste, survived an earthquake in Cairo, and picnicked in the Serengeti. My travels for work and pleasure have inspired my fantasy world. I now live in France with a naughty Australian Labradoodle, a jealous cat and a squash mad husband. Our two huskies, Ice and Sapphire, are sadly now gone but are transformed into wolves and immortalised in my book. Lumina is my debut novel and the first in a trilogy.

Does this book have a special meaning to you? i.e. where you found the idea, its symbolism, its meaning, who you dedicated it to, what made you want to write it?
This is my debut novel and so very special to me. I had wanted to write a fantasy book since childhood but the need for it to be perfect blocked me from making the attempt for many years. Finally I realized I didn’t have to discover the meaning of life and it was OK to write an adventure story that readers would enjoy – in fact the sort of story I enjoyed.
Fantasy writing had appealed ever since I followed a course on mediaeval French literature. The writers at that time were the first to write in a normal language rather than in Latin. They loved fantasy and all their ideas and images were so fresh and new. When I later read my first modern fantasy, The Gormenghast Trilogy by Mervyn Peake, I was entranced and decided to write a fantasy myself one day. The richness of the writing and images, as well as the escapism involved in entering the fantasy world, were all part of the attraction.
Where do you get your storylines from?
I had in mind that I wanted to portray two contrasting societies. One, Lumina itself, is sophisticated and civilised, governed by reason not magic; the other, Kuhla, is brutal, barbaric and controlled through tyranny and sorcery. That gave me a context for the story.
I also wanted to address racial prejudice. The idea for the bronzites came when I was walking with my husband and our two huskies. There was a pond near us and waterways criss-crossing the land and, with all that water, came dragonflies.  In Lumina they are transformed into dragonlites who clean the dragon’s scales. The magic of a sorcerer leads the dragonlites to bite and inject pregnant women and so create the bronzite race.
Although I start with a rough outline of the plot so I know where the story is heading, who the main characters are, and how I would like it to finish, the major storylines are developed out of the conflict and obstacles the characters face and how they overcome them.  That again depends to some extent on the skills or weapons they possess and the nature of the threat. I get inspiration for some of these from five different main sources.
Firstly, nature. For example, we lived in the midst of French marshlands with canals covered in a green algae. In places, methane gas would bubble up. These friendly waterways became the dreaded Maugraine Swamp with gas that could kill and slitherns lurking beneath the surface.
Secondly, animals. One of the key protagonists, Salazai, can commune with animals. Our two Siberian huskies transformed into the two snow-wolf cubs, Ice and Sapphire, who fight alongside Salazai in the battle with the Kuhlans.
Third comes memories, particularly from travelling around the world for my job. A banquet in Cairo inspired the parade of 500 waiters at the queen’s birthday celebrations, when the Kuhlan king gives her the kidnapped bronzite, Chrystala, as his present.
Next there is research. I was struggling to imagine the demon’s temple in the desert and wanted a dragon involved. By researching I discovered a serpent eating its own tail signifies infinity and the cycle of birth and death. That led to this description:
‘An immense rock formation dominated the horizon. It was shaped like a sleeping dragon, body curled in an elongated circle, great spines exploding from its back, their jagged edges following the swollen curve of its body to the sinuous snaking of its tail. At its forked end, the tail was held between the dragon’s gaping jaws. Two towering figures loomed beneath, demons carved from black stone. They guarded the entrance to the Temple of Irithnos, consecrated to Rach, ruler of all demons, and guardian of the Dragon King.‘
One of the most important sources of inspiration is of course people. When I need to be nasty I think of bad bosses I’ve had and the sort of things they would rage about when in a temper.
Was this book easier or more difficult to write than others?  Why?

Since Lumina was my first novel, I suspect it is the hardest book I will ever have to write. That’s because it was such a journey of discovery. For example, what pace to aim for – how to give  the reader enough adventure versus pauses to recuperate, or how to balance description with action.  I loved finding out how to interweave the growth of the characters with the development of the plot, or how to write a battle scene, or portray multiple points of view. I did this sometimes through experimentation, sometimes based on critiques from other authors, and sometimes after reading advice from authors in their blogs.
Do you only write one genre?
Although I love to read thrillers and crime novels, I don’t want to write one. So at the moment fantasy is the only genre. However, I am a great fan of  Eleanor of Aquitaine (she married the French king, then the English king, and gave birth to both Richard the Lionheart and King John. She also introduced chivalry and courtly love to England, transforming knights from thugs to noble heroes!). So I have started  a novel based on her life.
Give us a picture of where you write, where you compose these words…is it Starbucks, a den, a garden…we want to know your inner sanctum?
One of the rooms in our house has become an office and I use this and my computer in the winter. Against one wall is a book case that took my husband three days to assemble from a pack! There is a big comfy leather armchair by the window which a friend gave me when they moved back to England, and a TV to help me procrastinate! Our latest acquisition is a tall wooden piece of furniture for filing which has loads of slots I can use and which we found via our local ebay.
In summer I like to use a veranda next to the kitchen and here I have to write longhand. There are vines and grapes twining around the roof, and geraniums along one low wall. It looks out on one side to the garden, with wisteria and a fish pond, and on the other side, over woods, a river and the valley.
And finally, of course…was there any specific event or circumstance that made you want to be a writer?
It happened when I was very young. My sister, who was older by a year, had difficulty falling to sleep and I started inventing stories about princesses and princes to help her relax and drift off. That was the beginning of my wish to write some day. Throughout my childhood I loved reading and would bury myself in a book whenever I got the chance. The desire to give the same pleasure to others grew and grew over the years.