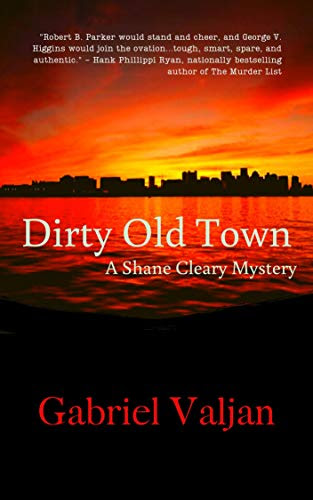 "Robert B. Parker would stand and cheer, and George V. Higgins would join the ovation. This is a terrific book--tough, smart, spare, and authentic. Gabriel Valjan is a true talent--impressive and skilled--providing knock-out prose, a fine-tuned sense of place and sleekly wry style."-- Hank Phillippi Ryan, nationally bestselling author of The Murder List

Shane Cleary, a PI in a city where the cops want him dead, is tough, honest and broke. When he's asked to look into a case of blackmail, the money is too good for him to refuse, even though the client is a snake and his wife is the woman who stomped on Shane's heart years before. When a fellow vet and Boston cop with a secret asks Shane to find a missing person, the paying gig and the favor for a friend lead Shane to an arsonist, mobsters, a shady sports agent, and Boston's deadliest hitman, the Barbarian. With both criminals and cops out to get him, the pressure is on for Shane to put all the pieces together before time runs out.

Well, this has a character that is an ex-cop, down on his luck P.I. Hard as rocks and good and kind at the same time. The kind of character I just love. I must tell you, I never ever tire of this kind of character. This one, Shane Cleary, is as charming as many others but seems to have his own personality. The ability of the author to use a typical character and yet give he or she a unique personality is the “hook” here. Something a little quirky; something that gets your attention. The thing that always reels me in. And Gabriel Valjan seems to have this talent, catching the reader and holding on to us long enough to keep us reading. That’s what happened to me. I sure didn’t put this one down too often.

This almost reads like an old Philip Marlowe or Sam Spade novel. Shane is the kind of P.I. always looking for a job, scraping to pay his rent. Lo and behold...along comes a pretty, yet sultry lady he was in love with long ago. She married for money and she still is a vamp. You won’t like her. I guarantee it. I think that’s the way it’s supposed to be or maybe I was jealous of her looks:)

I did spend an amount of time doing the “who’s trying to get who” which Valjan draws out and hides well. Lots of twists and turns. I won’t say I wasn’t occasionally a tiny bit confused, but I think it was only because there are a few places the story slows down a bit.
If you like Philip Marlowe dialog, settings that are almost black noir with a little humor now and then, this is a book you  don’t want to miss.

This is Valjan’s Book 1 in a new series titled “A Shane Cleary mystery”. While this may be the first in this series, Gabriel Valjan is most certainly not a newly published author. He has many books published, all with good reviews. Check him out. Gabriel is the author of two series, Roma and Company Files, with Winter Goose Publishing. Dirty Old Town is the first in the Shane Cleary series for Level Best Books. His short stories have appeared online, in journals, and in several anthologies. He has been a finalist for the Fish Prize, shortlisted for the Bridport Prize, and received an Honorable Mention for the Nero Wolfe Black Orchid Novella Contest in 2018. You can find him on Twitter (@GValjan) and Instagram (gabrielvaljan). He lurks the hallways at crime fiction conferences, such as Bouchercon, Malice Domestic, and New England Crime Bake. Gabriel is a lifetime member of Sisters in Crime.


Catch Up With Gabriel Valjan On:

This is a rafflecopter giveaway hosted by Partners in Crime Virtual Book Tours for Gabriel Valjan. There will be 1 winner of one (1) Amazon.com Gift Card. The giveaway begins on March 1, 2020 and runs through May 2, 2020. Void where prohibited.