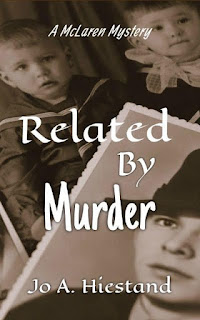 This post is part of a virtual book tour organized by Goddess Fish Promotions. Jo A. Hiestand will be awarding a $20 Amazon or B/N GC to a randomly drawn winner via rafflecopter during the tour.
See below to sign up for the Giveaway.
about the book...

From the moment ex-police detective Michael McLaren arrives at his friend’s house, he’s plunged into a nightmare of a case. Two men, hanged a year apart, each killed on a Good Friday. A barrister. A solicitor. Related careers. Related by murder. Related motives?

Pottery shards, a torn newspaper article, and biscuits are found in each man’s pocket. What do they signify? And the blackmail letters Melanie receives… Are they related to the murders, or are they separate, terrifying in their own way?

Professions, calendar date, McLaren’s attack. Could it all be entwined? Or is the motive for murder something else, something so secret that keeping it is worth attempting a third one?

I have loved the McLaren character since Book 1 of this series. The main character in a book often is what keeps me reading and loyal to a series. You might ask how I would describe a good character... I like someone with many dimensions. A strong and caring person. One totally sure of his or her own values. Does this mean a sweet person or always a good one? Not necessarily. Most of all one with enough personality to hold my interest. None of this is possible without an author talented enough to paint and create that character. This author has accomplished that with McLaren.

In McLaren’s lifetime, at least in this series, he has quit the force , begun 2 new careers, and become as great a Private Investigator as he was a cop. Somehow, he just has that innate sense of finding the pieces of a mystery and fitting them together. Some of his completed puzzles create happy endings. Some give answers to people anxious to know about their loved ones. He has lived through cases he never thought would touch him. Times he never thought he’d be able to experience and some devastating times he hoped he’d never know. Of late he’s  been in recovery mode and now the essence of a new budding relationship, a very tentative relationship, is beginning to peek it’s head up like a flower in spring. Does this new case get in the way of that relationship or help to strengthen it?

Every book in this series can be read as a stand-alone and there is a strong reason for that. Somehow without the reader realizing it, the author subtly weaves bits of previous stories into each book. It helps you have a full understanding. A full picture of the story. This is an absolute necessity to create the cohesiveness of a continuing series.

As I said, McLaren admits his affection for a lady he met in a previous book in the series. I like her and with her keen character description, Hiestand has helped me to picture her, Melanie. But don’t get me wrong. This isn’t a romance. It’s a British mystery and a relationship. The same type of British mystery Hiestand always writes. Full of twists and turns. The kind that keeps you wondering just exactly who McLaren might have in his sights. The kind you don’t know til the end...

“I’ve an idea. Would you like to come visit? Would that settle you? I would’ve asked sooner, but I thought perhaps you were investigating another cold case.”

Melanie laughed, and McLaren envisioned her dark blonde hair falling over her shoulder. “Well, then, I’m elected to nudge you out of your… I forgot what you call your bad mood.”

“My sister calls it my growlings. And I’m not in a bad mood. I just can’t focus on anything.”

“You’re still keyed up about your recent case. Just a second. I have to put the phone down.” During the conversational break, he could hear metal sliding along something hard, like a baking sheet skimming across a granite kitchen worktop. Little scrapes, like an aluminum spatula scooting biscuits or scones off the sheet, convinced him he’d interrupted her work and he needed to let her get on with her day. He had just persuaded himself to tell her goodbye when her voice was back at his ear. “You need a break, Mike. Something different from your usual schedule. Why don’t you drive up here? May is shining in its colorful glory at the moment. My housekeeping’s not too shabby, either.” She seemed to add the last sentence as a joke, for her voice rose in an air of teasing.

“I didn’t ring you up to wheedle a trip, Melanie. I thought a chat would do me good.” And I wanted to hear your voice, he nearly added, but didn’t. 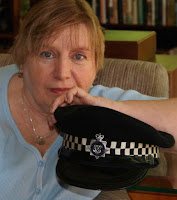 I grew up reading Dumas, Twain, duMaurier, Dickens and the Brontes.  I loved the atmosphere of those books. Add the Basil Rathbone-Nigel Bruce movies and the moods of 1940s/50s movies like Brief Encounter, Night Must Fall, and The Thirty-Nine Steps, and I knew I wanted to write mysteries, and the books had to be set in Britain. That was a must even though I knew only what I’d seen in the movies and read in the novels.  But the British pull was tenacious.  Three years ago I discovered that I have literally centuries and centuries of English, Scottish and Welsh ancestry.  Do genes mean anything?

My first visit to England was during my college years and that cemented my joy of Things British.  Since then, I’ve been lured back nearly a dozen times, and lived there for a year during my professional folksinging stint.

What do I write?  Well, at the moment, I write two British mystery series: the McLaren Mysteries and the Peak District Mysteries.  The McLaren novels feature ex-police detective Michael McLaren, who investigates cold case murders on his own.  The Peak District books feature a different British custom/tradition that is the backbone of each book’s plot.  These are a combo cozy/police procedural, and members of the Derbyshire Constabulary CID Murder team work these cases.

I combined my love of writing, mysteries, music, and board games by co-inventing a mystery-solving treasure-hunting game, P.I.R.A.T.E.S.

I founded the Greater St. Louis Chapter of the international mystery writers/readers organization Sisters in Crime, serving as its first president.

In 2001, I graduated from Webster University with a BA degree in English and departmental honors.  I live in the St. Louis, MO area with my cat, Tennyson, who helps me write :) and way too many kilts. 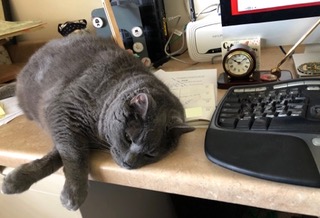 I met one of my future friends at Girl Scout camp.  We were in the fifth grade and didn’t know each other then.  I was walking through the woods and saw Pixie holding onto something at the base of a tree.  On coming up to her, I realized she had a snake by its tail.  She was trying to pull it out of the hole in the ground.  I grabbed onto the tail and we both yanked.  The snake wouldn’t budge.  We assumed it’d eaten a rabbit or something like that, and the tummy bulge prevented the snake from moving.  We left it there.  I wonder how many friendships are formed over a stuck snake?

In 1980 I was the St. Louis agent for The McCalmans, an internationally-known Scottish folk trio.  I’d met them when I was living in England, trying my hand at professional folk singing. I asked if they’d come to St Louis (where I lived) if I got them gigs.  They said they’d love to.  So when I returned home I firmed up about eight venues.  They were here during the hottest summer St Louis had seen in decades!  100º+ temps. The guys stayed with me--at that time I lived in an apartment that had one window A/C unit in the living room and one window unit in one of the two bedrooms.  I’m sure they were miserable. They were in town for two weeks, and I doubt I’ll forget a moment of it.  Including me cutting one of the guy’s hair – and when I was finished, he didn’t even have to wear a hat!

At one time our family had a pet skunk. Because he resided with us, I was used to skunks, so when I was a camp counselor and saw a skunk in the woods, evidently injured, I thought nothing of picking it up.  It looked as though its back was broken, for it was dragging its hind legs.  I brought it back to camp and asked the camp director if he’d drive me to the nearest vet so the skunk could be helped.  He yelled that I should put that skunk down and leave it alone.  When I put him on the ground, it bit my thumb. A week went by and an infection set in at the bite site.  The director rushed me to the nearest doctor.  I

learned that an animal that drags its hind legs most likely has rabies—for which there’s no cure if you get it. I was sent home and started the treatment (at that time, three weeks of daily injections—the needle injected sideways under the skin at the stomach.)  I learned later that Missouri Highway Patrol troopers came into the camp, searched the woods, found the skunk, and flew its head to a lab for brain examination.  Yep, the skunk was rabid. I give wild animals a wide berth, now.  I don’t want to go through that again.

I’m a fairly competent baker, but a pie I made was my all-time flop.  I made a blueberry-strawberry pie for a dinner I hosted.  On cutting it at the table I saw that it was swimming in a thin, blue watery mess. Someone tasted it and spat it out.  It was bitter!  I couldn’t figure why.  I knew I’d put in the sugar.  The next day, on looking at the ingredients I’d used, I realized instead of using cornstarch I’d used baking soda.  At least it would absorb any pie odors!

You can never be too careful about your word choices when traveling abroad.  My friends and I were in Edinburgh, Scotland, and had climbed to the top of the Sir Walter Scott monument. Back on the ground, I wanted to get some shots of the whimsical stone gargoyles that decorated the monument’s exterior.  I sat on a bench next to the monument to change the camera lens.  The area seemed to be a great place for older folks to sit and talk, perhaps feed the pigeons.  My friends were anxious to go to the Castle, situated at the upper end of the Royal Mile.  I got up from the bench--turning toward the Monument and, unfortunately, the older adults--and said, “I just want to take a photo of these old gargoyles.”  I’m probably the first St Louisan who’s been cussed out in Gaelic.

So, there are five truly noteworthy things about me that most people don’t know.  Aren’t you thrilled!  Thanks!  Jo

Check out the other Tour Hosts:  Related by Murder Tour