Branwen OShea will be awarding a $20 Amazon/BN GC to a randomly drawn winner via rafflecopter during the tour. 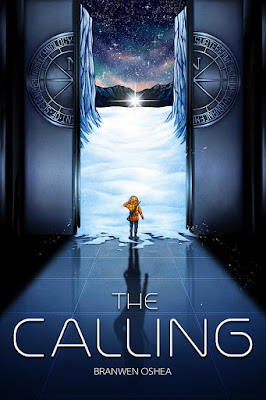 When Bleu’s little sister shows symptoms of the deadly Sickness, a strange vision directs him to leave humanity’s subterranean haven and seek the cure on Earth’s glacial surface. Joining the expedition team, Bleu expects extreme temperatures, not a surface ruled by ingenious predators.

Rana and her fellow star beings have co-existed with Earth’s top carnivores since the humans disappeared. But when her peers transform into Crowned Ones, the final stage of star being development, she fears remaining Uncrowned like her parents. To prove her worth, she undertakes a dangerous mission—contacting the hostile and nearly extinct humans.

But Rana’s plan backfires, and Bleu’s team retaliates. As war with the more advanced star being civilization looms, both Rana and Bleu separately seek a way to save their people.

She knelt, and with trembling hands, she grabbed the extra piece of soaked wood. If she put one log in the back of the cave and kept one in the entrance, then maybe she’d be safe between them until daybreak. Of course, that assumed whatever predator lurked outside lost interest in her by daybreak.

Two fires were her best chance. Her only chance. She quickly placed the second piece of wood, filled its opening with tinder, and grabbed her stones.

The growling grew closer. At this rate, she’d never get the log lit in time. Her mind raced through possibilities, but they all required skills she lacked and ended with her death.

Wait. Furred ones sense energy. In desperation, she expanded her energy to appear larger and hoped her fake size might give the predator pause.

In this enlarged-energy state, she struck the flint and fire stone together. They sparked, but the log remained unlit. Long claws scraped against the floor. She peered up from the flint. The pale light of the first log reflected off two eyes. 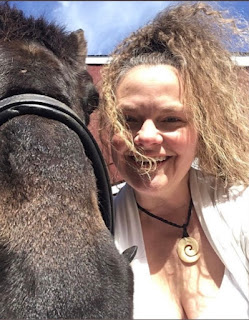 As a young girl, Branwen wanted to become an ambassador for aliens. Since the aliens never hired her, she now writes about them.

Branwen OShea has a Bachelors in Biology from Colgate University, a Bachelors in Psychology, and a Masters in Social Work. She lives in Connecticut with her family and a menagerie of pets, and enjoys hiking, meditating, and star-gazing. Her previously published works include contributing to a nonfiction yoga book, wellness magazines, and her published science fiction novella, Silence of the Song Trees.

The Calling has an interesting origin story, lol, and in the decade that it took to write it the characters have become like family.

My day job is working as a mental health counselor. One day at work, teen client after client reported how they had no hope for their future due to the looming climate crisis, bad economy, and increasing violence. At the time, everything being shown in theaters and being published seemed to be dystopian or post-apocalyptic, where often the problem was humanity itself.

I arrived home that night thinking about how much our society needed new stories of possible hopeful futures. Our entertainment seemed to have forgotten that people and societies can be healthy.

I had no ideas and no creative writing skills, but that night I told the universe that if it would give me an idea, I’d write it. When I finally fell asleep, I had multiple dreams where a humanoid alien, Rana, told me an epic story of humanity’s future. Every time I woke up and went back to sleep, Rana picked up the story where she’d left off.

The next day I realized I had been gifted a story, so I bought a cheap notebook and started writing. Over the next few weeks, eight other characters introduced themselves, all players in this same story of interlocking adventures. It’s taken me ten years to gain the skills to write my multiple point of view sci-fi adventure novel, The Calling, but I’ve enjoyed every minute of it. And yes, Rana has a starring role.

The novel is dedicated to the characters who shared their story with me and to my children who tolerated my frequent excursions into Rana’s and Bleu’s world.

To me, everything has a story – the unusual tree you pass (an ancient being?), the odd person in the grocery store (an alien in disguise?), and wild animals that seem oddly drawn to you (is this just me?). Because I see stories everywhere, my difficulty is deciding which stories have enough power and pull to keep me and future readers engrossed. Story ideas also need to contain a possible benefit for readers and be fun. Concepts must have both qualities to hold my interest. By possible benefit, I mean does it introduce new perspectives or ideas that may benefit society (science fiction is great at this) or bring hope to an overwhelming situation (like climate change). And by fun the idea must contain enough adventure, conflict, humor, and character growth to hold peoples’ interest.

The Calling was my first novel. I had no idea what I was doing and have probably rewritten it at least fifty times. As a multiple point of view novel, it required skills I didn’t yet possess. Even so, the story wouldn’t let me give up on it.

Initially, I wrote The Calling multiple times, then moved onto write three other novels before returning to it. I loved the story too much to let it go, but had to practice for years before my skills developed to the point where I could do the characters justice. I hope it brings readers even a fraction of the joy it brought me to write it.

No, but all my books have elements of stardust of magic in them. Beside The Calling, I have a YA sci-fi novella, Silence of the Song Trees published. I’ve also got a middle grade fantasy series and a YA paranormal mystery written and in the editing process, as well as book two and three of the Finding Humanity series drafted.

Ha! My inner sanctum is wherever and whenever I can squeeze in time to write. Most of The Calling was written on my laptop at coffee shops, libraries, or recital halls that were near where my teens were taking classes. We homeschool, and the rare times others are teaching them is my writing time. I’ve learned to take full advantage of these snippets of time and ignore any and all distractions.

As a young child, I was obsessed with reading fantasy, science fiction, and paranormal stories. I’ve always been aware of ghosts, spirits, and the songs of trees, and since these things were scoffed at by my super religious parents, I searched for comfort in books. However, other than a few books by Native American authors, most books I found presented the experiences I had as bizarre and strange rather than a natural part of the human experience.

I was always drawn to writing, but this was before the internet, and it was hard to find books on writing for a ten-year-old. I wrote some pretty horrid stories, recognized them as poor versions of what I yearned to create, and put aside writing for many years. It wasn’t until I had my own kids that I started writing again. I wanted to give them the kind of stories I wanted as a kid but couldn’t find.