Love, Death, and the Art of Cooking

This post is part of a virtual book tour organized by Goddess Fish Promotions. Linda Griffin will be awarding a $25 BN/Amazon GC to a randomly drawn winner via rafflecopter during the tour.

Software engineer Reid Lucas loves to cook and has a history of falling in love with married women. When he leaves his complicated past in Chicago for a job in California, he runs into trouble and must call a virtual stranger to bail him out of jail. 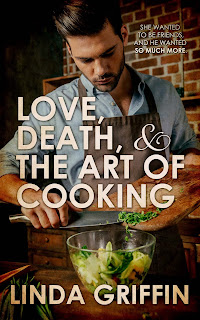 Alyssa Knight, a tough street cop waiting for a church annulment from her passive-aggressive husband, is the roommate of the woman Reid calls for help, and she reluctantly provides bail for Reid. He falls for her immediately, and cooking for her is an act of love. She just wants to be friends, but they keep ending up in bed together. When his boss is murdered, Reid is a suspect—or is he the intended target?

Although the romance genre is not my favorite, this one was a quick enjoyable read. It is also a culinary person’s dream. That’s me.  Well...having a handsome software guy that could cook...that could be my dream any day:) In fact the mystery and suspense (and the cooking)  seem to overshadow the “romance” part. It’s true that two people meet in a situation you would not imagine, and that spark is there between them. But Linda Griffin has written a story that has very little to do with the “boy meets girl, they fall in love and live happily ever after”.  This one truly is filled bad guys and good guys, murder, and red herrings. I was truly surprised in the end. I was also quite hungry in the end. If you like food and you like cooking, you’ll enjoy all the description in this one. Good book.

Alyssa was patting down a suspect, checking for weapons, a task that called for her full attention, but she was a little distracted. Last night’s events had seemed natural at the time, but now she couldn’t imagine what she had been thinking. She had taken an enormous leap of faith—or else she had taken leave of her senses.

At first sight she had dismissed Reid as harmless, not sexy, not her type, but he had been a surprisingly physical presence as he escorted Paul out of the apartment. Nothing had changed, but maybe he was a little less harmless than she had thought, a little more interesting? He did have very nice eyes, even if they reminded her of a cocker spaniel’s, and he was a fabulous cook.

She had images of him now that she didn’t want to have, sense memories, as her actor friends would say. His body was not as soft as she had expected. He was pretty fit compared to the skinhead slob she was frisking and other guys she had been seeing all day. She had wanted to direct him and then hadn’t needed to. The way he touched her had made her feel soft and warm, as if her flesh was melting under his hands.

She tugged the suspect’s right hand behind him and snapped on the cuff. She remembered Reid’s mouth on hers. There was more tenderness in his kisses than she would have expected him to show this soon, if ever. Could he honestly feel that…for her? 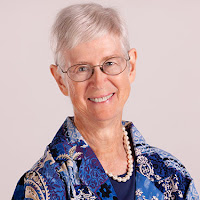 Linda Griffin is a native of San Diego and has a BA in English from San Diego State University and an MLS from UCLA. She retired from a position as fiction librarian for the San Diego Public Library to spend more time on her writing. Her stories have been published in numerous journals, including Eclectica, Thema, The Binnacle, Orbis, and The Nassau Review. Love, Death, and the Art of Cooking is her fourth romantic suspense novel published by the Wild Rose Press, following Seventeen Days (2018), The Rebound Effect (2019), and Guilty Knowledge (2020).