The town of Unity sits perched on the edge of a yawning ravine where, long ago, a charisma of angels provided spiritual succour to a fledgeling human race. Then mankind was granted the gift of free will and had to find its own way, albeit with the guidance of the angels. The people’s first conscious act was to make an exodus from Unity – they built a rope bridge across the ravine and founded the town of Topeth. For a time, the union between the people of Topeth and the angels of Unity was one of mutual benefit. After that early spring advance, there had been a torrid decline in which mankind’s development resembled a crumpled, fading autumnal leaf.

Following the promptings of an inner voice, Tula, a young woman from the city, trudges into Topeth. Her quest is to abide with the angels and thereby discover the right and proper exercise of free will. To do that, she has to cross the bridge – and overcome her vertigo.

Topeth is in upheaval; the townsfolk blame the death of a child on dust from the nearby copper mines. The priests have convinced them that a horde of devils have thrown the angels out of Unity and now occupy the bridge, possessing anyone who trespasses on it. Then there’s the heinous Temple of Moloch! 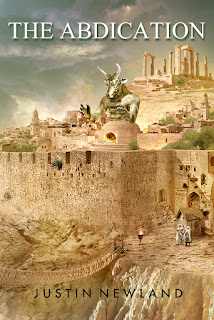 A narrow path snaking down the steep slope linked the town to the bridge. Fearing the guards’ return, she hurried along the winding, uneven path. It was fine for mountain goats, but with her bad ankle and her walking stick, she was nowhere near as fleet of foot as they.

The bridge had a quietening effect, like a warm homecoming after a long absence. Ever since she had heard about the abandoned town of Unity, she had wanted to visit the place for herself. Within touching distance, she felt a keen sense of belonging, even though she had never been near it – until now.

A solitary wicker lantern sat in a cradle, shedding a pale light over a crescent-shaped area covered in flagstones that had been carved out of the side of the mountain. In the middle of it were the bridge pillars and a small wooden shack.

The bridge itself was a slender rope structure slung across the open chasm. Narrow matting formed the bridge deck wide enough for one person to cross. At least there were hand ropes. At the Topeth end, it was attached to two thick, green-coloured pillars. Fingers of mist rose out of the ravine, obscuring the Unity end of the bridge. The structure reminded her of a long, thin hammock tied between two pairs of massive tree trunks.

IGNORE THIS WARNING AT YOUR PERIL.’

It was true. She had heard rumours about the bridge, about how predatory devils prowled the dip in the centre of the rope bridge. It was forbidden to cross it. 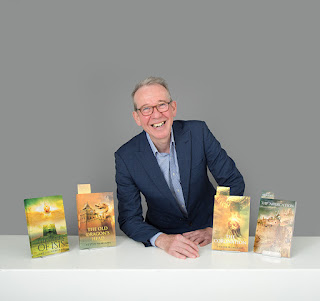 Justin Newland is an author of historical fantasy and secret history thrillers - that’s history with a supernatural twist. His stories feature known events and real people from history which are re-told and examined through the lens of the supernatural. He gives author talks and is a regular contributor to BBC Radio Bristol’s Thought for the Day. He lives with his partner in plain sight of the Mendip Hills in Somerset, England.

The Genes of Isis is a tale of love, destruction and ephemeral power set under the skies of Ancient Egypt. A re-telling of the Biblical story of the flood, it reveals the mystery of the genes of Isis – or genesis – of mankind. ISBN 9781789014860.

“The novel is creative, sophisticated, and downright brilliant! I couldn’t ask more of an Egyptian-esque book!” – Lauren, Books Beyond the Story.

The Old Dragon’s Head is a historical fantasy and supernatural thriller set during the Ming Dynasty and played out in the shadows the Great Wall of China. It explores the secret history of the influences that shaped the beginnings of modern times.  ISBN 9781789015829.

‘The author is an excellent storyteller.” – British Fantasy Society.

Set during the Great Enlightenment, The Coronation reveals the secret history of the Industrial Revolution. ISBN 9781838591885.

“The novel explores the themes of belonging, outsiders… religion and war…  filtered through the lens of the other-worldly.” – A. Deane, Page Farer Book Blog.

“In Topeth, Tula confronts the truth, her faith in herself, faith in a higher purpose, and ultimately, what it means to abdicate that faith.”

Does this book have a special meaning to you? i.e., where did you find the idea, its symbolism, its meaning, who you dedicated it to, what made you want to write it?

The theme of the novel is set out in the preface, which is:

“When a man loses his way, he feels desperate.

When a nation abandons its purpose, it slides into anarchy.

When Homo sapiens shuns its nature as the wise, the kind and the humane, it can only be called… The Abdication.”

The story is about human nature, what it is, and what it isn’t.

The story is about human purpose. Is there one? If so, what is it? Are we in any way actually close to the line of progression that leads towards it? Or are humanity moving away from it?

The novel tells the story of Tula, a young woman, who sets out to discover the truth about human nature, her faith in a higher purpose, and what it means to abdicate that faith.

The book is dedicated to three special people who had a great effect on my life. And that was why I added these words to the dedication;

‘The best debts are those that can never be repaid.’

I wanted to explore the subject of human nature, the human condition today, and our use of free will, for myself.

The storyline of The Abdication started with one word: abandonment. I wanted to explore whether and how much humanity has abandoned its core nature, its own humanity, such qualities as wisdom, forbearance, kindness, and compassion, a nature in which cruelty and violence have no place. The story line itself was made a lot easier once I found the right setting, the right location, and that was the ravine, dividing two towns, Topeth and Unity, joined only by a slender, rope bridge. It was also easier after I imagined the main character, a young woman, Tula. She led the story, and I followed her, wherever she went, and threw in a few obstacles to test her faith in that higher purpose.

The Abdication was a departure for me. It’s the first novel I’ve written which has a single point-of-view character – the other three had multiple point-of-view characters. So, structurally, the novel posed new and different obstacles for me, which I felt ready to overcome. With that structure, you have to be more inventive in finding ways to include back story, to keep the plot boiling, while continuing to develop the characters’ journeys.

The genre in which I write is called secret history thriller, that’s history with a supernatural twist. I take historical events, places and people, especially those that were seminal in shaping the human condition, and I examine them through a supernatural lens. This yields a different explanation for why those events happened, and why those people did what they did.

Within that, my first novel, The Genes of Isis, is mythological fiction, The Old Dragon’s Head and The Coronation are both historical fictions, and The Abdication is a crime/fantasy thriller.

I write in different places, physical places that is. But I think I have to have the same mind-set, or state of mind, to write, no matter where I am. I can write in the living room, the office, the diner, or in a café. Best of all, in the peace and quiet of a monastic retreat, where it’s so quiet and there are no distractions and you can hear your thoughts winging away across the chambers of your mind, and it’s so easy to write that you can’t type fast enough.

I wanted to explore the human condition, and put it onto paper, so that I had a physical record of where I’ve been, what I’ve thought, and how I’ve configured it. Even though it’s fiction, there are traces of many different disciplines in the stories. Obviously for a historical fiction writer, there’s history, but history is a conglomerate, just as air is composed of many different elements. History contains and adjuncts to religion, and to war, and to philosophy, and to theology, and to art. That’s what makes the form of the novel so great, it can accommodate all these different and often divergent disciplines.