Chloe -- Manipulative on the best of days, my mother hooked up with the president of a powerful MC. When he retired, she decided to give me to a man I’ve never met. Guess she thought she’d  still be able to keep her status if I became the ol’lady of the new president. I have no idea what the men in the club are like and I’m not judging, but they wear the 1% patch and I know enough about MCs to know that can’t be good for a girl like me. 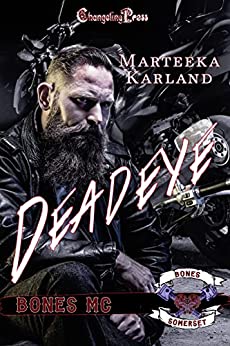 Deadeye – I’m a patient man. Pride myself on that. So when I find a girl camping out under a rock watching the club, I camp out to watch her. The more I watch, the more I like what I see. Before I can make her mine, though, I need to find out why she’s here. No one’s more surprised than me when she tells me who her daddy is. Except maybe her daddy. Now I’m pitted against one of my own brothers. But the more I get to know the spunky little minx, the more I want her. And the more I realize I may have to kill my own MC brother and tear apart a rival MC looking for the woman meant to be their new president’s ol’lady. 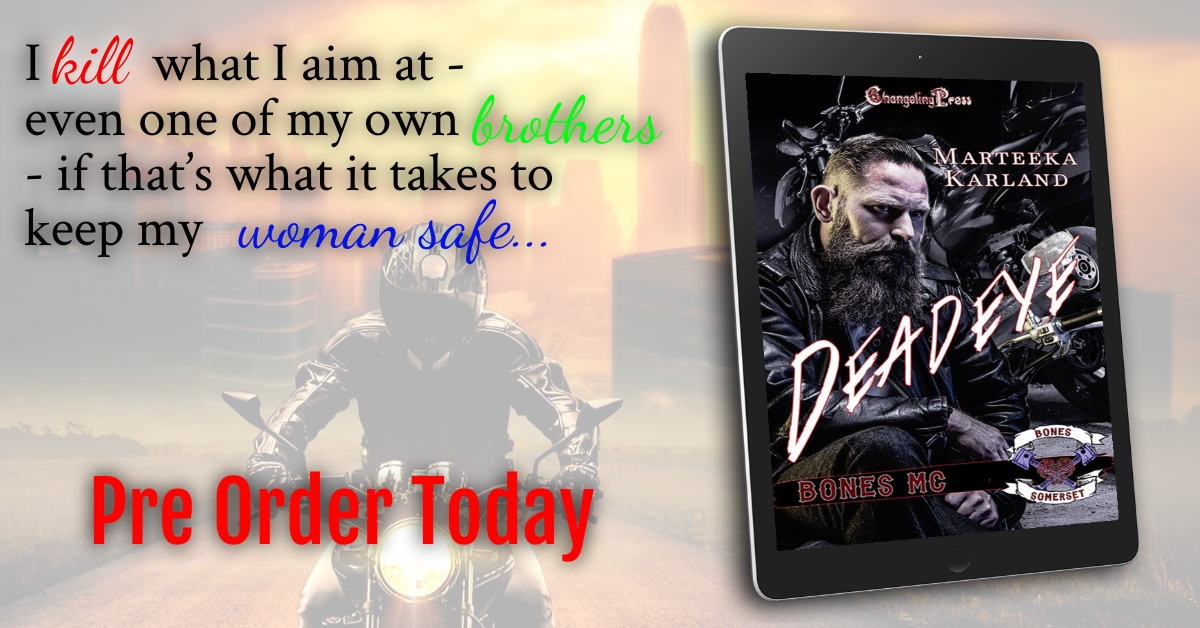 I was tired. So fucking tired. I’d only been on the run for five days, but it was five days of backwoods hell. Finding the place I needed to get to had been hard enough. Actually getting there without anyone seeing me had been a feat like I’d never undertaken before. Still don’t know how I managed it without getting hopelessly lost. But here I was.

The name of the club was Bones MC, Somerset, Kentucky. I’d walked all the way from Jeffersonville, Indiana to find this place. Compared to the club I’d come from this one was relatively small. But from what I’d learned, they were very close-knit and incredibly dangerous.

I was currently hiding under a rock overhang just tall enough for me to lie flat on my belly and watch the place. I’d covered myself with leaves and sticks, camouflaging my hiding spot as best I could. So far, no one had spotted me. If they had, they hadn’t busted me yet. I should have just gone into the clubhouse, but I wanted to scout the place out first. If there seemed to be too much shady shit going down, I’d just move on without wasting my time. Or putting myself in a worse position than I’d been in when I ran.

So far, there had been parties that got pretty loud and wild, similar to what I’d seen at Iron Tzars MC. The guys at Bones partied hard, but they worked hard, too. Beyond the large clubhouse was a neighborhood. There were what looked like high-end, double-wide mobile homes, but also a smattering of houses, with more going up. The two days I’d been hiding out, I’d seen several of the club members working throughout the day. If there were drug deals or arms sales going down, it wasn’t anywhere near their compound. There were women all over the place, but none of them seemed to be there against their will.

The weather was turning. Autumn rain was coming, if the sky was any indication. It was cold and damp, and I had no desire to spend another night under a rock. If I’d judged this place wrong, I was in trouble. Of course, if I didn’t get some decent shelter soon, I’d still be in trouble. I’d heard good things about this club in the community. They might not be law-abiding citizens, but they weren’t so bad they were feared by the whole city. I was counting on the reputation they’d apparently worked hard to build. If Bones turned out to be a wolf in sheep’s clothing, I was fucked, because I had nowhere else to go. And the one man I needed to see here, the one man who could help me in a way I could live with, had no idea I even existed.

Knowing there was nothing else I could find out without getting inside the place, I decided to quit being a pussy and stop stalling. I stood, looking down at my clothes. Having been outside under a rock for the better part of two days, I was filthy. Probably stank too. There was a creek just below my hiding place on the other side of the hill between me and the compound. I could wash there and change my clothes before trying to get inside. If I was lucky, they’d stop me at the gate and take me straight to the man I needed to see. I could only hope he remembered my mother. If not, I was probably screwed.

The wind had started to pick up, and there was a cold bite to it. I knew I needed to hurry, but not bathing and changing clothes simply wasn’t an option. If I came to their doorstep looking like a hobo, I was afraid no one would take me seriously. Or, worse, tell me to get the fuck on before they got rid of me.

I stripped, tossing my filthy, damp clothing to the ground. I kept the long-sleeved T-shirt to use as a washcloth, so I didn’t have to actually get in the creek. While it was still warm most days, the nights in this part of Kentucky were chilly this time of year. Shallow water, like the lazy stream here, had started to cool, making this bath seriously uncomfortable.

I’d never done this before. Bathed out in the open. In fact, though I’d lived in an MC for most of my life, roughing it wasn’t exactly in my repertoire. I’d never been camping. Or hunting. I’d been fishing occasionally but usually on a boat or a dock at the lake. All I’d had to eat the last five days were some snacks I’d managed to sneak out and a couple bottles of water I refilled every chance I got. Now, I was cold, dirty, hungry, and so fucking tired I just wanted to sleep for a fucking week.

“Well, now. What do we have here?” The lazy drawl made me jump and cry out. I tripped and landed on my ass, my naked body on full display. The guy smirked as he looked down at me, his big arms crossed over a powerful-looking chest. His shoulders were wide, stretching the fabric of his Henley, as did his biceps. He had a full beard reaching about halfway down his chest. Cold, assessing blue eyes were fixed squarely on me.