This post is part of a virtual book tour organized by Goddess Fish Promotions. Sharon Struth will be awarding a $10  Amazon or B/N GC to a randomly drawn winner via rafflecopter during the tour. 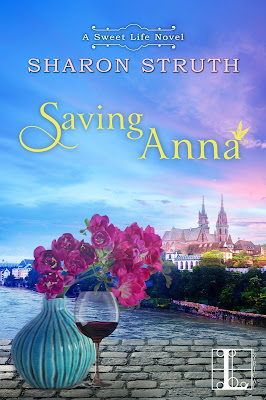 Germany’s sparkling Rhineland is the perfect place for a fresh start . . .


Warming people’s hearts with true accounts of kindness is what columnist Anna Kelly does best. But no one knows the private misery she endures in her abusive marriage. Still, leaving is difficult—until a deeply personal bequest from a beloved elderly neighbor compels Anna to travel to Germany. There she begins an unexpected adventure of paying it forward that will take her far from her complicated life in Brooklyn.

Arriving in the historic and picturesque city of Mainz, on the breathtaking Rhine River, Anna settles in at a cozy guesthouse filled with colorful residents. But fulfilling her task will require the help of a translator and knowledgeable guide.

Josef Schmitt will gladly shuttle the American visitor around if it distracts him from his dark thoughts. Ever since a serious accident sidelined him at the local excursions company, he’s been unable to forget the pain he caused or forgive himself. Now, accompanying Anna on her mission takes them both to surprising places—and they just may find the courage to truly set themselves free . . .

My Review
Sometimes our relationships change so fast it’s almost as if we weren’t looking. Then we have to wonder which side changed. Which one of us became so different or did we really just not want to see the problems in the first place. You know what I mean, back at the beginning when we were so happy. What a tangled web huh? Along with all of this comes having to find the strength to leave; to just get out. Often when we finally accomplish this, we end up meeting someone with their own baggage. Sometimes it’s good to have someone to share it with and sometimes what you left behind might be harmful to the health of everyone around you. This is the story of Anna.

This is an involved book; one that could be thought of as the romance genre or maybe Women’s Fiction. While this genre is not particularly my “thing”, I had a hard time putting this book down. The storyline is good, and it also touches on a subject many people understand; others question, and some cannot even conceive of. This leads to the only thing I became impatient with in this book. I kept wondering why in the world anyone would feel any obligation to an abuser. But you see, it hasn’t happened to me. Those of us in this position all think we would just walk right out. But we don’t know what that life is like. Struth did such a good job of describing and portraying the situation, I became impatient with the character Anna. Guess that’s what you call good writing huh?

This is the second book I have read and reviewed by Sharon Struth. It’s the second time I’ve said romance was not a genre I enjoyed. She just writes well and sort of sucks you into the story.

Read an excerpt...
In two days, Patrick would return to LaGuardia airport and take a cab directly to his office at Goldman Sachs. The lawyer said he’d have the divorce papers served there around lunchtime. By then, she’d already be on another continent. Far away from the physical abuse he’d want to inflict on her once the papers were in his hands. Of that, she felt certain. He’d smacked her around for lesser infractions, starting just days after they’d returned from their honeymoon.

Even though she would be leaving the country to stay safe, he deserved a note. A note would be easier than a conversation.

At the kitchen island, she found a pad and steadied a pen on the paper.

Dear Patrick,
If you’re reading this, it means you’re back from Florida and have realized I’m not here.

Anna ripped the page off the small legal pad, crumpled it into a ball, and tossed it on the marble island. She wrote for a living and could do better.

Dear Patrick,
For the past two years, I’ve begged you to get help. I understand your father hurt you, but I can no longer accept your past as an excuse for hurting me. ME! The person who always loved you, tried to help you, accepted your many, many apologies. You say you love me, but your actions speak otherwise. I no longer love you. You bully me, make me afraid, and refuse to let me to see my friends and family—

She ripped the paper off the pad and tore it in half. Too much. She’d spoken these words to him many times after he’d calm down, her speeches always soliciting remorse-filled apologies she’d blindly believed for the first year of their marriage. The second year, she’d grown skeptical, but continued to cover the bruises and lie to anybody who happened to see one. Now, she despised him.

The clock on the wall showed it was time to leave. She pressed the pen to the paper and the words flowed easily this time.

Dear Patrick,
By now you’ve been served the divorce papers and know I’m leaving you. Please seek help and do not look for me. If you are calm when I return, we can talk. Otherwise, you will deal with my attorney.
Anna

She propped the note next to a bowl of fruit, where they always left messages they wanted the other to see…

AUTHOR Bio and Links:
Sharon Struth believes you’re never too old to pursue a dream. The Hourglass, her debut novel, was a finalist in the National Readers’ Choice Awards for Best First Book. She is the author of the popular Blue Moon Lake Novels, which include Share the Moon.

When she’s not working, she and her husband happily sip their way through the scenic towns of the Connecticut Wine Trail, travel the world, and enjoy spending time with their precious pets and two grown daughters. She writes from the friendliest place she’s ever lived, Bethel, Connecticut. For essays, please visit www.sharonstruth.com or visit her blog, Musings from the Middle more information, including where to find her published Ages & More at www.sharonstruth.wordpress.com

See the Tour at these other sites