This post is part of a virtual book tour organized by Goddess Fish Promotions. Mikea Howard will be awarding a $10  Amazon or B/N GC to a randomly drawn winner via rafflecopter during the tour. 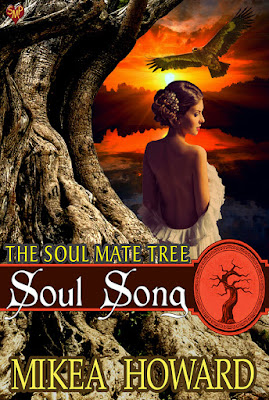 Dottie thought she had it all: a successful singing career, a handsome fiancé, and a starlet’s wardrobe. Sudden betrayal brought it all crashing down around her. Those she trusted most played her as nothing more than a pawn. One misstep while fleeing the scene trapped her in another world alone, save a mysterious visitor.


Guatimozin, an eagle shifter, has spent ages assisting people through the realm between life and death, leading them to join loved ones on either side. No one had ever made him want anything for himself until he discovered this city girl.
Forces plot against them and time is short. Soon, their chance for a happily ever after will be too late.

Let’s start at the beginning…Soul Mate Tree books are sweet, and this was no different. Your perfect love story and even your everyday plot except…this one had a twist and lots of interest as the eagle-shifter, Tim, and Dottie go on their travels to recover her inheritance. I said some of the aspects of this plot were like others but the ride this author takes us on is full of surprises.

It took me a long time to figure out some of what was going on in this Soul Mate Tree book but as I looked at Howard’s books, I realized she had a previous series called Diesel War and that was where the inference of Diesel War must have come from in this book. So, with that knowledge …I’ll say this might not be a stand-alone book. However, the story was good, the characters interesting and as in all Soul Mate Tree books, it’s the ultimate love story.

As I mentioned Mikea Howard is the “writer name” for two sisters-in-laws who joined together to write the series I mentioned, Diesel War, as well as this Soul Mate Tree book (Book 10). All have good reviews. Check them out.


Dottie wiped the tears from her face. Damn him, and damn his floosy too. She’d do what her mother constantly threatened her stepdad with, and remove his cock to wear it proudly on a chain around her neck.

I jus’ gotta find a way out of this kooky forest first.

Making her way back onto her feet, she dusted off her dress in a mindless motion. The fabric passed beneath her strokes smooth and dirt free. She studied the once vibrant red dress she’d worn on stage. The satin now appeared drab and colorless. Her bare feet peeked from beneath its hem, as clean as the moment she’d dabbed them dry from her bath. The blind sprint from her dressing room, across town, and up the hill, should have left them covered in filth.

She moved away from the tree to scrutinize her surroundings. As much as Dottie hoped she’d end up in heaven, her mother always insisted that, as a willful child trying to pass as something she wasn’t, her final destination would be a bit further down.
The sensation of electricity passing through the air made every hair stand on end as a matter-of-fact reply came from behind. “No, you aren’t dead, but you’re not exactly alive either. You’re in a realm known as the in-between.”

Spinning around, Dottie came face to face with a stranger. Like the tree, he appeared in color, only he wasn’t pink and purple. Instead, a tall man with reddish tan skin, swirling silver eyes, and waist length striking black hair, stared at her as though regarding a ghost. Thick muscular arms crossed over his chest as his shocked expression ease into a slow smirk, highlighting the defined beak-like nose, high cheekbones, and strong chin framing his mouth.

Writing under Mikea Howard, we are actually Mindy Howard and Kelly Smith, sisters-in-law who share a love for romance, usually paranormal. We have spent the last several years reading and sharing books as well as authors, often making comments about how we'd love to write our own when we ran out of things to read. 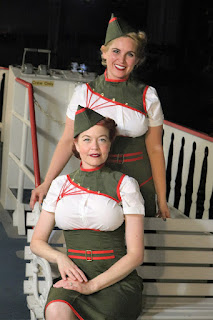 While based on our TBR piles, we have not run out of reading material, yet we decided to write when the muse hit Kelly with a dystopian diesel world and an opening scene with the heroine running out into the woods. Mindy then saw her hero step in, and The Diesel War series was born.
Mindy is an IT professional at a telecom company. She is married to a musician and teacher, who also happens to be Kelly's brother. She has one adult son and is living out west.
Kelly is a Registered Nurse working in maternal-fetal medicine. She has a great husband, who happens to be Mindy's husband's best friend. She has one son in high school, one daughter in middle school, and is living on the east coast.

Check out all of the Stops on this Tour...