This post is part of a virtual book tour organized by Goddess Fish Promotions. Mary Angela will be awarding a $20  Amazon or B/N GC to a randomly drawn winner via rafflecopter during the tour. 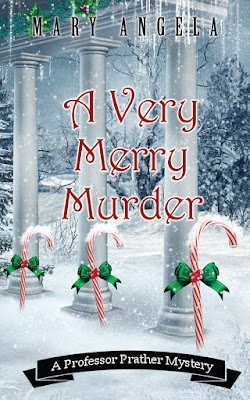 It’s December in Copper Bluff, and from hillside to hallowed hall, everyone is merry—or will be as soon as semester break arrives. Students are studying, professors are grading, and Emmeline Prather is anticipating the university-sponsored holiday concert. Friend and colleague Lenny Jenkins will be accompanying the visiting quartet, Jazz Underground, and Em can’t think of a better way to kick-start the holiday season.

But before she can say “Jingle Bell Rock,” trouble arrives at Candlelight Inn, the bed and breakfast where the quartet is staying.  One of the band members dies unexpectedly, and suspicion falls on Em, whose altercation with the man ends with him on the floor. He never recovers, and now she’s worried her reputation might not either.

When Emmeline starts to see parallels between an Agatha Christie novel she’s teaching and the victim, Lenny claims she’s read one too many mysteries. But as the clues unravel, so does the murderer’s patience. Em is close to finding the truth, but will the truth—or the murderer—push her over the edge?  It will take a Christmas miracle to solve this case, but if there’s one thing in surplus this time of year, it’s faith.


What an enjoyable cozy. I think a good part of the fun has to do with the character, Emmeline, or should I say Professor Emmeline Prather. Em is a little, shall I say “bookish” and murders just sort of seem to happen around her. Then again, that has to happen to someone in most mysteries for there to be a book, doesn’t it? But this cozy…the setting is fun and really quite different. There’s a little tongue-in-cheek as far as academia is concerned right along with those dedicated teachers we’ve all had at one time or another.

All of this comes with a Christmastime mood and spirit.


I’ve probably already given you an idea of how I felt about the main character, Emmeline. She makes this story. Could a few of the other characters have been a little more defined? Maybe but I don’t think the lack of it detracted at all from the story. Another definite attraction was the author’s description of the scenes. The decorating for Christmas, the elaborate decorations at the Inn. All of this was very vivid, and I felt as though I was amidst it all.

This is Book 3 in a series titled “A Professor Prather Mystery”. It was a fun, enjoyable, quick read and after all…it really puts you in the Christmas spirit. What more could you ask?

Read an excerpt...
“To be fair,” I said, grabbing a piece of Mrs. Gunderson’s peanut brittle, “the kiss was reciprocal. Pen seemed to be enjoying Miles’s attention quite a bit.” I offered the candy to Lenny and took another piece.

“Did he know her, or was he just that good looking?” He took a bite.

I munched quietly. I wasn’t sure I wanted to answer the question.

“Miles had good looks, a sexy voice, and stage presence.” I shrugged. “I can see why girls flocked to him. But Pen? You’re right. We need to find out if they knew each other, or if that was their first encounter.”

“Oh no,” he said, reaching for another piece of candy. “I didn’t say we needed to find out anything about anyone.”

“Come on, Lenny. You’ve got a reason for going out to the inn. You could say one of your friends left something behind. Something musical.”

He shook his head. “Musicians are pretty maniacal about their stuff. They don’t just leave things behind. Besides, how do you know Pen will be there?”

“I don’t. But Alyssa said they’ve been busy this December with Christmas travelers. Pen is probably working.” I put a K-Cup in my Keurig. “Even if she isn’t, we could still ask Alyssa. She might be able to tell us a little about her.”

Lenny stared into the living room. “I think we have a more immediate problem.”

“What could be more immediate than my impending DNA sample?” I said.

The tree chose that moment to topple over.

Mary Angela is the author of the Professor Prather academic mystery series, which has been called “enjoyable” and “clever” by Publishers Weekly. She is also an educator and has taught English and humanities at South Dakota’s public and private universities for over ten years. When Mary isn’t writing or teaching, she enjoys reading, traveling, and spending time with her family. For more information about Mary or the series, go to MaryAngelaBooks.com.


Check out the Tour at these Hosts too