This post is part of a virtual book tour organized by Goddess Fish Promotions. P. D. Alleva will be awarding a $50 Amazon or B/N GC to a randomly drawn winner via rafflecopter during the tour. 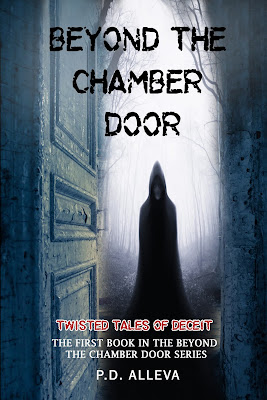 Twisted Tales of Deceit is the first installment in the Beyond the Chamber Door series. Featuring three tales (The Calculated Desolation of Hope, Somnium, & Knickerbocker) chronicling an evil influence on the human psyche, tipping our hands into the engagement of what is most horrifying; our dastardly, human deeds steeped in self-destruction, desperation and the loss of dreams. Metaphorical warnings have been constructed inside these pages to reflect the everyday signs the universe provides under the guise of reflective light that return to mirror how evil tempts our hand so to not fulfill the dreams of the soul. Our doubts, our sadness, our indecisions rooted in fear, are toiled with by the presence of imps bent on hatred and in need of our nightmares to survive. Here, the human spirit is dripped like honey, tasteful to the dark corridors of human malevolence and taken advantage by the corrupt and seamlessly endless parade other worldly dimensions have on what should be our earthly utopia, creating rage in the cosmic hedonism of jealousy.


He remembered the wolf, roaming in the room. Saw the gamer and the boy he had saved with their throats cut out as the wolf fed on them. Their black eyeballs staring at William.

And how Katarina appeared again, another needle in hand. Remembered how he wanted it now, to help him forget. She shot him up and his world became smaller, the walls closing in to squeeze all that he knew in between the four walls of that tiny room, now no bigger than the bed he lay on.

He remembered how the world disappeared, melted away like ice.

Remembered how the darkness invited itself into his space, and how the world had gone mad.

“What the fu…” he grumbled, collapsing to the floor. His heart fluttered, and his skin flushed pale white and red. He leaned against the wall, watching the final dissipation of daylight outside the window. And the room grew dark with a sliver of moonlight that broke through the window as his memories faded and an unnerving hunger cried out from his veins. A tiny voice in his head.

His body felt pain, pain like he’d never felt before. His mind felt confusion, he couldn’t put a thought together. His eyes turned wet with tears and he started to wail. He wailed until his voice gave out.

And then the footsteps. Loud, clunking footsteps against the wood floor. The massive image half hidden in the darkness, half illuminated by the moonlight, seemed to drift toward him with a mindful caution only to disappear just before reaching him. His vision wavered as the hunger grew.

In front of him, nose to nose, Mephisto shined his yellow eyes on him. And Mephisto grinned, scooping him in his arms like a baby and delivering him to the bed.

“Rest,” Mephisto said, pausing as he looked on William who saw the death of stars gleaming in Mephisto’s eyes.

His grin was sinister, daring and satisfied.

P.D. Alleva is an author, psychotherapist and hypnotherapist specializing in trauma, addiction and mental health. He is the author of several books, including fiction novels, Indifference and A Billion Tiny Moments In Time…, Seriously Twisted; These Gods of

Darkness (Poetry), Let Your Soul Evolve (1st and 2nd ed), and Spiritual Growth Therapy: Philosophy, Practices and Mindfulness Workbook (non-fiction). He has developed behavioral protocols for addiction and mental health and teaches mindfulness, Buddhist meditations and manifestation techniques to his patients as a means and alternative to using pharmaceuticals. Go to spiritualgrowththerapy.com to learn more. Mr. Alleva offers a special discount on his video tutorials for his readers, so please use Promo Code 7474 for a special 90% discount. He is currently in private practice with his wife, Lisa. He lives with his wife and children in Boca Raton, Florida.

Check out the Tour at these sites too