This post is part of a virtual book tour organized by Goddess Fish Promotions. A. R. Kennedy will be awarding a $25 Amazon/BN GC to a randomly drawn winner via rafflecopter during the tour. Click on the tour banner to see the other stops on the tour. 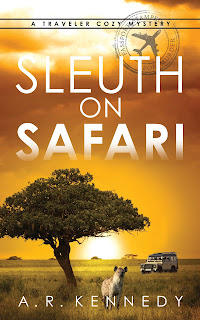 Naomi and her estranged sister are off on a trip of a lifetime—an African safari, a bucket list trip for Naomi on which she got a last-minute deal. Naomi thinks traveling with her sister will be the worst part of her African safari until she finds one of their fellow travelers, the unlikable Dr. Higgins, dead. She gets more adventure than she bargained for when she starts investigating what she thinks is murder but the luxury lodge says was a tragic accident. She only has a few vacation days, and a few game drives, to find the killer.

I went on a fun safari trip in reading this. The terrain was described well, and every animal was described well enough to picture it. Even more important, every character had his or her own unique personality. The interaction between all of them was really done well to make this story full of humor and a little quirky.

I did have a problem though. It seemed that Naomi felt she had to find the killer and yet, I couldn’t really figure out why. She wasn’t a news writer or a cop. No one threatened her sister Charlotte. Maybe she was scared which the story mentioned or maybe she was even just nosy. She was constantly planning ways to sneak around and look for clues, but it seemed as if she tried way too hard to explain why. Maybe she had previous experience. Her sister Charlotte touched upon her solving a murder or being nosy.

So what does all the above mean I thought about this book? I thought I read a really well written book by an author who writes descriptive writing as well as she does dialogue. She creates well-crafted characters too. None of the previous is easy to do. I think this seemed like the middle of a series rather than the first book that should have given us a little background.  Write some more A.R.

Sleuth on Safari is Book 1 of a series titled “The Traveler Cozy Mystery Series”. A.R. Kennedy has another series published which has great reviews.

Read an Excerpt...
Something red on the walkway, about fifteen feet away from me, toward his room, caught my eye.

I slowly walked toward it. From a few feet away, it looked like a blob, something spilled. As I stood over it, it looked like a paw print. Like the ones my childhood dog, Molly, would leave in the kitchen after playing in the mud. But it was red.

I looked to my left, down the walkway, toward the fifth cabin, Dr. Higgins’ cabin. “Dr. Higgins, you there?” I shouted. There was no answer. I hesitated but then stepped off the walkway. Slowly, I walked toward his suite, listening intently for any sound. I stood at his door, which was ajar. “Dr. Higgins? It’s Naomi from next door. Everything okay?”

With each step, I saw more red. Maybe he had spilled some wine. He liked the red wine. Not as much as Jack liked his beer but it was his drink of choice for the trip so far. He was still at dinner when Charlotte and I left last night. Maybe he came back to his room and had a few more glasses. And somehow spilled it everywhere outside his room.

No response. No refusal but no permission either. I went in anyway.

Seated in the sitting area’s plush chair, facing the window and the beautiful landscape, was Dr. Higgins. His head was hanging back. His hand was hanging down by his side, a broken wineglass on the floor next to it. There was even more red everywhere inside the room too. Maybe he’d had a late night after all.

I poked him on his shoulder and prepared for him to yell at me for entering his room unauthorized.

“Dr. Higgins, it’s time for our morning drive.” I tapped him again. “You’re late,” I added, just to annoy him.

I walked around him to face him head on. 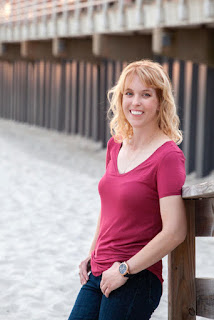 A R Kennedy lives in Long Beach, New York, with her two pups. She works hard to put food on the floor for them. As her favorite T-shirt says, ‘I work so my dog can have a better life'. She’s an avid traveler. But don’t worry. While she’s away, her parents dote on their grand-puppies even more than she does. Her writing is a combination of her love of travel, animals, and the journey we all take to find ourselves.

Thank you for the great review!
That is my goal --' I went on a fun safari trip in reading this.'
I want the reader to feel like they are traveling.
Next book is Iceland, then Australia!

really enjoyed it. Best of luck with your book.

Do you let your friends and family read early drafts of your book?

Great cover, thanks for sharing!

Thanks so much for sharing your book and for the giveaway also. Greatly appreciated!

I'm having issues replying so--so I'm replying to everyone together!
Kathy--Thank you for the well wishes.
Bernie -- Yes, my mother reads the draft before the one that goes to the editor.
Victoria--Thank you. I love the cover too!
James, Rita and Edgar--Thank you for commenting.

Were you having issues on this blog AR. Would like to know to see if I have anything wrong.

To the rest of you...best of luck with the Giveaways. Give the book a try!

The book sounds intriguing! Thanks!