The Unholy by Paul DeBlassie with an interview 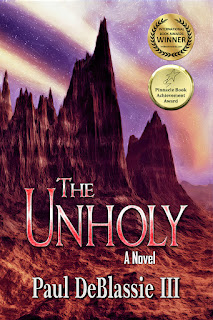 Winner of the International Book Award and Pinnacle Book Award for Visionary Fiction! The Unholy is a dramatic story of Claire Sanchez, a young medicine woman, intent on discovering the closely-guarded secrets of her past. Forced into a life-and-death battle against an evil Archbishop, William Anarch, she confronts the dark side of religion and the horror of one man's will to power.

Closing her eyes, she rocked back and forth—imagining herself safe in her mother’s arms—then opened her eyes to the light of the full moon shining through the mouth of the cave. The shadows on the walls were just shadows now, no longer goblins and demons. As she slipped into a trance, images flickered in her mind. She saw the woman who had brought her to this place scattering pieces of raw meat around the open mesa where her mother had

struggled, helped by two other women the girl could not identify. 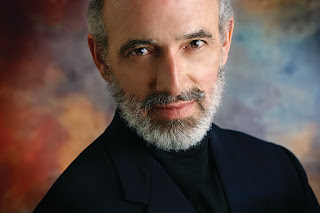 Does this book have a special meaning to you? i.e. where you found the idea, its symbolism, its meaning, who you dedicated it to, what made you want to write it? I lived out the story of The Unholy with folks I knew personally and patients I treated in psychotherapy professionally. Their suffering, struggles, and my own passion to tell a truthful story about a obscure religious reality.

Where do you get your storylines from? Storylines fly into my head and linger. They urge me to put them to paper. When they dig in and press to get out, then the story is ready to be told. It always comes from life experience and clinical encounters in the practice of depth psychotherapy.

Was this book easier or more difficult to write than others?  Why? The Unholy posed a unique challenge in that its reality is played out every day in the media. The dark side of religion in real. Check the news media, then consider dipping into the horror behind the lovely scenes we were brought up to buy into. Read The Unholy.

Do you only write one genre? I write professional essays in depth psychology and spirituality. My novels focus on the supernatural world, its reality, and its life-changing effects.

Give us a picture of where you write, where you compose these words…is it Starbucks, a den, a garden…we want to know your inner sanctum? I write in what my artist/wife, Kate, calls my sanctum sanctorum – my study. I do teletherapy from there, I write there. It’s an intimate realm of books, words, and stories.

And finally, of course…was there any specific event or circumstance that made you want to be a writer? At age 16 I knew I wanted to be a psychologist/writer. And, voila! It happened.

It's great hearing about new books when you have a family who loves to read. Thanks so much for sharing your book.

Thank you for hosting The Unholy!

I enjoyed reading the excerpt and the personal stuff was quite interesting! The Unholy sounds like a thrilling read, thanks for sharing with me!

It sounds like a thrilling read! Love the cover!