Bernadette Marie will be awarding a $25 Amazon/BN GC to a randomly drawn winner via rafflecopter during the tour. 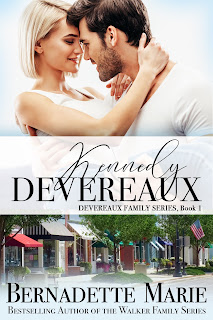 Kennedy Devereaux, owner of Kennedy Devereaux Designs, is a sight to behold in her signature pink colors, accented with custom designed jewelry. Intriguing enough that Joel Kingsley, the man building the new business next door, can’t help but keep coming around, just to get to know the woman in the designer clothes. He finds she’s not such a mystery, and his charm easily wins her over--until she finds that he’s forgotten to let her in on the secrets of his past.

Pink doors, crystal light fixtures, white shelves. Joel cupped his hands around his eyes to get a better look at the feminine interior of the store he stood in front of. Kennedy Devereaux Designs, the lettering on the door said. Costume jewelry, purses, and a few pieces of clothing were elegantly displayed on uncluttered shelves. He could see a small sitting area toward the back of the store with white chairs on a plush pink rug.

When he stepped back from the door, he inhaled. Could he even smell the store and all of its femininity?

“Can I help you?” A soft voice had him turning to see a woman, as feminine as the store, standing behind him.

She was the smell—sweet and floral. Soft golden hair framed a delicate face, and her lipstick matched the soft pastel pink of the doors he’d been looking through. Sharp blue eyes watched him as he stared at her.

Joel Kingsley was no idiot around women, but this one seemed to render him speechless. 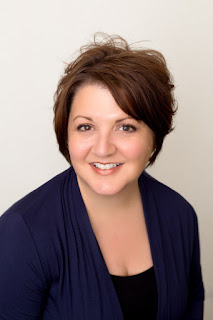 Bestselling Author Bernadette Marie is known for building families readers want to be part of. Her series The Keller Family has graced bestseller charts since its release in 2011. Since then she has authored and published over thirty-five books. The married mother of five sons promises romances with a Happily Ever After always…and says she can write it because she lives it.

Obsessed with the art of writing and the business of publishing, chronic entrepreneur Bernadette Marie established her own publishing house, 5 Prince Publishing, in 2011 to bring her own work to market as well as offer an opportunity for fresh voices in fiction to find a home as well.

When not immersed in the writing/publishing world, Bernadette Marie and her husband are shuffling their five hockey playing boys around town to practices and games as well as running their family business. She is a lover of a good stout craft beer and might have an unhealthy addiction to chocolate.

This book is my 41st published book. So that in itself is very special to me. But for this book, I drew the main character upon my love of pink, wishing I had a fashion sense, and giving her ownership of a boutique I loved growing up that my mother went to. The setting of the real boutique was special to me because in time I would own that same building and get to run my empire there as well.

I am very lucky to have stories just form when I touch a keyboard. I’m never sure I even have a full storyline when I sit down to write. But, they will develop from things that are happening in my life, or around the world. Kennedy’s story revolves around the boutique and the daily running of it and the people that visit. I think my love of peoples’ personal stories make it easy for me to find something to write about.

Every book is easier to write because you know the process. In romance, there are many tropes and formulas. Once you get those down, creating the characters becomes the bigger issue than the story. Even then, the characters aren’t really a problem, it’s remembering the problems you give to them and keeping them in order.

I write only one genre, mild romance, but I do dabble in the subgenres between contemporary, paranormal, and susupense.

I write on my iPad, usually at my kitchen table at 6am, or on my couch at 6pm, or on my treadmill desk when I’m getting in my steps.

I fell in love with mini-series television when I was in junior high (mid 80’s.) Books were becoming these three week television events, and I was sucked in! It wasn’t long before the dream of being on a mini-series shifted to wanting to create it. Soon, I was writing stories with friends in spiral notebooks, fashioned as letters between characters that we created for ourselves. One day, I began to take my character’s story and make it a book. The rest is history. I submitted my first novel at sixteen, but didn’t publish until I was thirty-seven—right where I needed to be in my life to make it happen.