This post is part of a virtual book tour organized by Goddess Fish Promotions. Nancy Boyarsky will be awarding a $20 Amazon/BN GC to a randomly drawn winner via rafflecopter during the tour. Click on the tour banner to see the other stops on the tour. 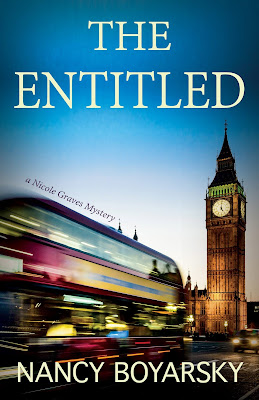 Travel to London and retrieve Abigail Fletcher, a 17-year-old in a study abroad program at the prestigious King’s College in London. The assignment sounds simple enough.

But Abigail’s return is put on indeﬁnite hold when she’s charged with the murder of her boyfriend, a former student at King’s. Nicole believes Abigail has been framed, but the victim’s tight- knit circle of friends and relatives are most unwilling to talk to an American detective. Further complicating the case, is Abigail’s deﬁant and uncooperative demeanor.

As evidence stacks up against Abigail, Nicole discovers that she herself has become the next target. Nicole’s ﬁrst solo case abroad as a private detective has just turned a lot deadlier than she ever anticipated.

“Wait!” she said. “I heard you were a friend of his. I’m looking into his background. Won’t you just answer a few questions?” He paused, looking at her through a crack in the door.

“I knew him when I was little”—he pronounced it lit-ull— “in primary school. That’s a long time back, innit? He was a year older.” He gave a self-deprecating smile. “I thought he was a good bloke ‘cause he stuck up for me when the bullies were beatin’ on me. But later…"

"Later? What happened then?”

The young man shrugged, closing the door more so he was peeking through a slit.

“Anybody who talks about it…” He shook his head and shut the door. 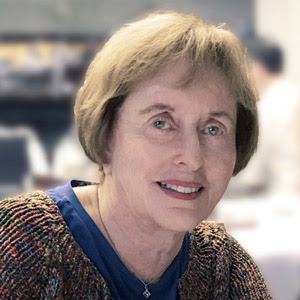 Nancy Boyarsky is the bestselling author of the award-winning Nicole Graves Mysteries.

Reviews compared The Swap to the mysteries of Mary Higgins Clark and praised Nancy for contributing to the "women-driven mystery field with panache" (Foreword Reviews) as well as for their "hold-onto-the-bar roller coaster" plots (RT Book Reviews). Kirkus had special praise for The Bequest, concluding, "Boyarsky's weightless complications expertly combine menace with bling, making the heroine's adventures both nightmarish and dreamy." Her most recent mystery, The Entitled, fifth in the series, received praise from Foreword Reviews for "vibrant street scenes, swift pacing, and Nicole's steely nerve." It was chosen by Apple Books as one of the most anticipated books of the fall.

Before turning to mysteries, Nancy coauthored Backroom Politics, a New York Times notable book, with her husband, Bill Boyarsky. She has written several textbooks on the justice system as well as articles for publications including the Los Angeles Times, Forbes, and McCall's. She also contributed to political anthologies, including In the Running, about women's political campaigns. In addition to her writing career, she was communications director for political affairs for ARCO.

The first book in the series, The Swap, won a gold medal Erik Hoffer Book Award. In response to the controversial and incendiary themes explored in the third Nicole Graves mystery, Liar Liar, Nancy Boyarsky was invited to present at the American Library Association Annual Conference in 2018 on "Women-Driven Mysteries in a Post #MeToo World."

Each book of the Nicole Graves mystery series can be read as a stand alone. Readers are invited to connect with Nancy through her website.