This post is part of a virtual book tour organized by Goddess Fish Promotions. Sverrir Sigurdsson and Veronica Li will be awarding a $50 Amazon/BN GC to a randomly drawn winner via rafflecopter during the tour. 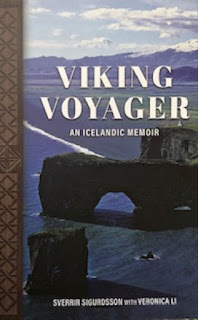 This vivacious personal story captures the heart and soul of modern Iceland. Born in Reykjavik on the eve of the Second World War, Sverrir Sigurdsson watched Allied troops invade his country and turn it into a bulwark against Hitler’s advance toward North America. The country’s post-war transformation from an obscure, dirt-poor nation to a prosperous one became every Icelander’s success. Spurred by this favorable wind, Sverrir answered the call of his Viking forefathers, setting off on a voyage that took him around the world.

My maternal grandfather, Þorkell Magnússon, was the captain of a fishing vessel called Gyða. In early April 1910, he and his seven-man crew, including his eldest son, set sail from Bíldudalur, a small town in northwest Iceland. Their destination was the rich fishing grounds beyond the fjord. April was the beginning of the fishing season, which lasted until September. These were the “mild” months. In reality, the weather was often stormy and below freezing, pushing both the boat and men to the limit of their endurance. Three weeks later, on April 23, Gyða headed for home, her hull laden with cod, the valuable cash fish many fishermen had died for. Nearing their home fjord, the men’s hearts must have lifted. A hot meal, a warm bed, and the family’s embrace were within a day’s reach.

That night, a furious northerly gale pounded the region with snow and sleet, whipping the sea into a deadly cauldron of crashing waves. All hands would have scrambled on deck to wrestle with the wind, jibing and tacking to keep the gusts from capsizing the boat. The battle went on all night. The next morning, Gyða was still upright and staggering closer to home. Einar, my grandfather’s neighbor and a former crew member, attested to seeing her from shore during a visit to his family’s farm on the outer reaches of Arnarfjörður (Eagle Fjord). The wind was still howling, pummeling the boat from left and right. But Einar was confident the boat could hold herself together. After all, Gyða was a sturdy oceangoing vessel, one of the first to be built in Iceland with state-of-the art technology. In just a few more hours, she would reach the safety of the harbor.

about Sverrir Sigurdsson and Veronica Li... 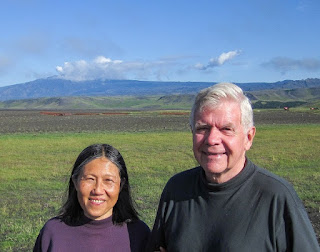 Sverrir Sigurdsson grew up in Iceland and graduated as an architect from Finland in 1966. He pursued an international career that took him to the Middle East, Africa, Asia, Eastern Europe, and the U.S. His assignments focused on school construction and improving education in developing countries. He has worked for private companies, as well as UNESCO and the World Bank. He is now retired and lives in Northern Virginia with his wife and coauthor, Veronica.

Veronica Li emigrated to the U.S. from Hong Kong as a teenager. She received her Bachelor of Arts in English from the University of California, Berkeley, and her master’s degree in International Affairs from Johns Hopkins University. She has worked as a journalist and for the World Bank, and is currently a writer. Her three previously published titles are: Nightfall in Mogadishu, Journey across the Four Seas: A Chinese Woman’s Search for Home, and Confucius Says: A Novel. Her website is www.veronicali.com.

If you could have one paranormal ability, what would it be?

I’d love to be able to beam myself to any place I want.  I’ve traveled to sixty countries in my lifetime, but there are still interesting places I haven’t seen, such as the pyramids of Egypt, the ancient sites of Jerusalem and the Altai Mountains of Mongolia where eagle hunters live.  But I detest the hassles of traveling—flight delays, airport congestion, going through customs especially in countries where you have to bribe your way in, and in these pandemic times, contracting COVID-19 on the flight.  I wish I could say, “Beam me up, Scotty,” and find myself in a place I fancy.

What is one thing your readers would be most surprised to learn about you?

Readers would be surprised that I didn’t become fluent in English until well into my twenties.  I was well-versed in several Scandinavian languages—Icelandic, Danish, Swedish, and Finnish—and my German was passable.  But I’d always viewed English as a scrappy, undisciplined language that jumbled bits and pieces from the Romance and Germanic schools, with neither the ardor of one nor the structure of the other.  I didn’t take English seriously until my last years in Finland, when I realized English was the lingua franca of the twentieth century.  To prepare for my travels around the world, I gave myself a crash course by consuming every Agatha Christie mystery.  It worked.

When writing descriptions of your hero/ine, what feature do you start with?

Since my book is a memoir, the hero is me.  I don’t really describe myself physically as I would other people.  Instead, I let my actions and events portray me.  For example, from the age of 9-14, I worked in the summer doing manual labor on a farm.  On days off, I took long, grueling hikes with friends.  Without my saying so, readers will get a picture of a healthy, active kid.  My book also shows photos of me at every stage of my life, saving me a thousand words each.

As for describing characters other than myself, I usually start with a general impression and then zoom in on the features that bring about that impression.  For example, I introduce my boss in Africa, a Scottish architect, as a stereotype of the British colonialist in Africa.  I then describe his handlebar mustache and bow-legged strut, khaki shorts and white knee-highs, and you can imagine him starring next to Errol Flynn in The Charge of the Light Brigade.

Are you a plotter or a pantser?

I’m a pantser.  I started my memoir by writing down exciting fragments of my life.  I would write about watching a warplane crash and burn when I was five, and then jump to my travels in the Middle East in my twenties.  It was just whatever came to my mind.

The whole process changed when I showed a few snippets to my wife, a former journalist and published author.  She thought my stories had page-turning potential and proceeded to help me put them together.  And she’s definitely a plotter.  We zeroed in on an aspect of my life and plotted the storyline accordingly.  We organized the events in chronological order, at the same time flashing backward and forward to allow views through different windows of time.  And all is held together by the overarching theme—the making of a modern-day Viking and his adventures.

Did you learn anything from writing this book? If so, what?

The story was originally put on paper by a novice writer —Sverrir— and subsequently shaped by an experienced writer —Veronica.  During the writing process, I learned a lot about creative writing from Veronica, who insisted on painting vivid pictures of places and people in order to transport readers to a different world.  When I said I couldn’t remember the specifics, she threatened to exercise a coauthor’s right to creative license.  Of course I couldn’t let her turn my life into fiction.  So I dug into my memory, did some research, and found the details to flesh out the scenes.  From its birth as a factual and dry account, the story evolved into a visual canvas for the reader.

Another key lesson I learned is the importance of the theme.  Once the theme is established, the episodes fall into place.  A gripping focus helps to keep up the tension in a story, like a train hurtling toward a destination, and makes it a page-turner.

Thanks for having me here to talk about my adventures in Iceland and around the world.

You're welcome. As you see in my interview, English is my sixth language. That became my passport for working all over the world.

Sounds great! Thank you for sharing!

Most happy to be here to share my adventures with everyone.