This post is part of a virtual book tour organized by Goddess Fish Promotions. M. K. Scott will be awarding a $40 Amazon or B/N GC to a randomly drawn winner via rafflecopter during the tour. Click on the tour banner to see the other stops on the tour. 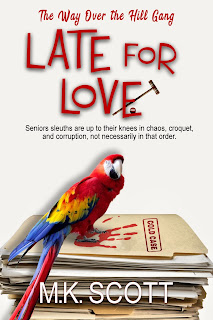 The senior sleuths love a good laugh, but this conundrum is no laughing matter. A missing journalist, an African Grey parrot, and a possible mob connection sound like the beginning of a bad joke. Unfortunately, there is no punchline and no one, aside from the seniors, who would dare to take the case on.

Will their first chance to handle a case on their own prove to be way too much for them to handle, and more importantly, could this first be their last?

This is not the first book I have read by M K Scott. I loved this one as much as the others in this series. Funny, clean, easy to read, and well-written. A nice combination.

These aren’t heavy deep books. They are light and fun cozies. The characters fit right in and boy are they neat. You can find me laughing out loud when I’m reading about each of their own unique personality traits. Sort of like real life. Having read more than one I can tell you these books can easily be read as stand-alones.

Late for Love is Book 5 of a series titled “The Way Over the Hill Gang”. This “over-the-hill” reviewer hopes another book is in the making :)

Gus placed his hand on the page. “I got it. We could ask her if there was anyone who wanted to kill her sister.”

The wide grin announced his friend thought this was an obvious question. To some it might be, but not to the parrot party club owners who knew nothing about Lyre’s disappearance. Jake shook his head before replying. “We don’t want direct questions that might make her suspicious. We might try some parrot talk and allow Lorelei to tell us stuff without realizing it.”

“Parrot talk? Are you the bird whisperer now?” Gus inquired with a dismissive sniff.

“No. I do watch television, especially on Saturday mornings when that vet show is on. Parrots tend to pick out their feathers when they are distressed. Sometimes, they’re aggressive. Other times, they won’t eat or talk as much and perform repetitive behavior. Lorelei will immediately tell us she’s not Lyre and her sister isn’t there, possibly hoping that’ll get rid of us. It’s important to listen to how she says it.”

“Got it.” Gus held up a thumb to indicate comprehension. “If she breaks into tears, then maybe she actually cared for her sis.”

“Don’t forget she could just slam the door in our faces or possibly not open it at all.”

“There is that. I can only work with what I know currently. If we’re able to see the bird, I can make a visual inspection asking if the bird was pulling out its feathers when she got it. I’m not sure how long the bird was alone, but I’m sure it was distressed being locked up without food or water. Then I could mention that sometimes birds are impacted by the owner’s emotions. I might ask if Lyre was afraid of something.”

“I thought the sisters weren’t close,” Gus pointed out.

“Could be,” Jake conceded even though it galled him to do so. It sort of ruined his plan about questioning the sister. “People say stuff like that all the time, especially when they don’t want to talk to the police. Not being close could mean a lot of stuff, too. Maybe they didn’t do lunch or share clothes, but they did have a general idea of what was happening in each other’s lives. Lorelei could be good for supplying a friend’s name or a boyfriend. They might know more.”

About the Author: M. K. Scott is the husband and wife writing team behind The Painted Lady Inn Mysteries and The Talking Dog Detective Agency. Morgan K Wyatt is the general wordsmith, while her husband, Scott, is the grammar hammer and physics specialist. He uses his engineering skills to explain how fast a body falls when pushed over a cliff and various other felonious activities. The Internet and experts in the field provide forensic information, while the recipes and B and B details require a more hands-on approach. Morgan’s daughter, who manages a hotel, provides guest horror stories to fuel the plot lines. The couple’s dog, Chance, is the inspiration behind Jasper, Donna’s dog. Overall, both are fun series to create and read.