Mark Reutlinger will be awarding a $25 Amazon/BN GC to a randomly drawn winner via rafflecopter during the tour. 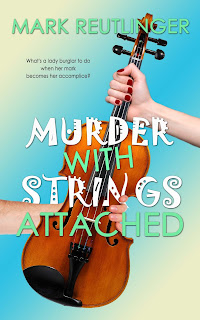 Sometimes even the most carefully conceived burglary can take an unexpected turn. Florence Palmer has her eye on concert violinist Aaron Levy's priceless violin. Unfortunately, she finds it's already been stolen. Her surprise doubles when the virtuoso she'd planned to burgle offers to hire her to help him steal it back. But they're not the only ones looking for the missing violin. When Flo inadvertently becomes the prime suspect in a case of murder, she and Aaron need to clear her name. Will they find the real killer and get the violin back to its rightful owner without anyone else, especially themselves, being killed?

Does it take a thief to know a thief? Sometimes people realize there is a much easier way to live the high life and turn to crime. That’s what Flo did but she sure never thought her “robbee”  would become a robber too.

This is a fun and very easy to read mystery. Reading a book with the POV being the burglar is not new I am sure but most certainly makes it interesting here. Not just interesting, but as I’ve said, fun. I liked the humor, the bit of romance and the murder mystery all mixed together.

Mark Reutlinger has additional books published. His non-fiction reviews are as good as his fiction reviews. Check them out. https://amzn.to/3r6n9RQ

I was beginning to think that Aaron Levy had deliberately thwarted me by taking his violin with him or putting it in the safe—an ungentlemanly thing for him to do, given all the time and effort I was putting into finding it. I returned to the front room and was about to check the last remaining door—probably a connection to the neighboring suite—when I almost tripped over something sticking out from under the sofa. I reached down to shove it back out of the way.

How could someone treat an instrument so valuable in such a cavalier manner, I wondered. More and more it seemed as if Mr. Aaron Levy was entirely too careless and had to be relieved of this heavy responsibility before someone…well…stole the damn thing!

And I was just the woman to do it. I opened the case and lifted up my trophy, held my flashlight close to it, and with great satisfaction, began to examine it lovingly.

And that’s when the lights came on. 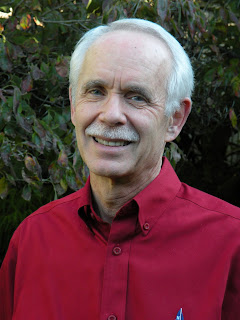 MARK REUTLINGER is an attorney and former law professor. He now writes novels in which the law
is frequently broken, including his “Mrs. Kaplan” cozy mystery series (MRS. KAPLAN AND THE MATZOH BALL OF DEATH and A PAIN IN THE TUCHIS) and the political thrillers MADE IN CHINA and SISTER-IN-LAW: VIOLATION, SEDUCTION, AND THE PRESIDENT OF THE UNITED STATES (under the pen name M. R. Morgan). MURDER WITH STRINGS ATTACHED is his latest novel. He is also a reviewer for the New York Journal of Books.

Mark and his wife Analee live in University Place, Washington, where in addition to reading and writing he plays clarinet with the Tacoma Concert Band and enjoys tennis, biking, exotic cars, model railroading, and various arts and crafts. He has no idea where he finds the time for it all.

Find MURDER WITH STRINGS ATTACHED at:

Thanks for the nice review, Kathy. I'm glad you enjoyed the book. A "fun and easy" read is exactly what I wanted to accomplish. There's enough heavy reading all around us these days. And I do like to tell a story from the POV of one of the principal characters, as I do in my "Mrs. Kaplan" series. It somehow seems more intimate and less detached that way.

Thank you, Linda. I went through quite a few titles before deciding on this one.

Reviews are easy to write when you enjoy the book.