If the Light Escapes

If the Light Escapes

A standalone sequel to IF DARKNESS TAKES US

A solar electromagnetic pulse fried the U.S. grid. Now northern lights are in Texas—3,000 miles farther south than where they belong. The universe won’t stop screwing with 18-year-old Keno Simms. All that’s left for him and his broken family is farming their Austin subdivision, trying to eke out a living on poor soil in the scorching heat.

Keno’s one solace is his love for Alma, who has her own secret sorrows. When he gets her pregnant, he vows to keep her alive no matter what. Yet armed marauders and nature itself collude against him, forcing him to make choices that rip at his conscience. IF THE LIGHT ESCAPES is post-apocalyptic science fiction set in a near-future reality, a coming-of-age story told in the voice of a heroic teen who’s forced into manhood too soon.

Lots of action in this one, Book 2 of a series titled Braving the Light. This is a sort of post-apocalypse story. The story of being left to try and survive and grow after the end of all ends has happened. A huge awakening to what is left and what isn’t, and that how to manage was never in a “post-apocalypse 101” book.

I am not usually an end of the world person. I’m way too black and white a thinker to enjoy them. But...this was different. This was a story of the way out of the darkness. A story of living every day to try and survive. Not preparing for the end, but rather building for the future. And I liked it.  Brenda Marie Smith seems to have come up with a more realistic Sci-Fi story, one with feeling and vision. There was plenty of action. It was excellently written so that you could picture the scenes and there were rather off-beat interesting characters to add a little light to the story.

I don’t regret not having read Book 1 first, If the Darkness Takes Us, but I think it would have given me a little better picture at the beginning of this book. I intend to go back and read it. I hope I’ll have a Book 3 to read soon! 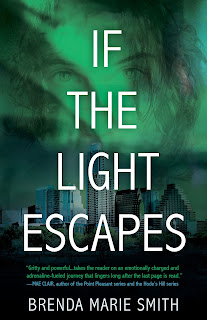 Bright green lights stream and pulse across the northern sky all night now, growing from thin and wispy to bold and fat, expanding, contracting, sending out bands of yellow streamers like they’re partying on ecstasy at some cosmic rave. The lights are pretty, and they’re hypnotic, and they creep me out to the core.

Northern lights every night for two solid weeks in Texas. Halfway to the equator from where they belong. They’re supposed to be a phenomenon tied to the magnetic poles—it’s a scientific fact.

Nothing is right about this. The only explanation I can think of is that the north and south poles are shifting. I don’t know what that means for the planet and the future of its creatures. We don’t have TVs or talking-head scientists to tell us...

The universe just won’t stop f**king with us.

Today, I’m hoeing corn in our front yard, sweat stinging my eyes. It’s blistering hot out here—early December in what used to be high-tech Austin, until the … sun zapped us with an electromagnetic pulse and took our power, our cars, the damned running water. It stopped pretty much everything—everything modern, that is.

It’s been fourteen months, and all the front yards in our subdivision are mini-cornfields now. We grow beans and veggies in the backyards. It’s a desperate attempt to keep us alive when our food stockpiles run out. Don’t know if it will work, but I’m doing my damnedest to make sure it does. 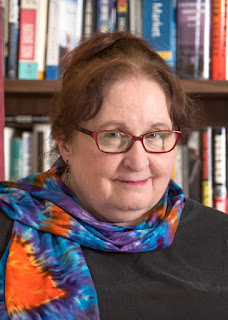 Brenda Marie Smith lived off the grid for many years in a farming collective where her sons were delivered by midwives. She’s been a community activist, managed student housing co-ops, produced concerts to raise money for causes, done massive quantities of bookkeeping, and raised a small herd of teenage boys.

Brenda is attracted to stories where everyday characters transcend their limitations to find their inner heroism. She and her husband reside in a grid-connected, solar-powered home in South Austin, Texas. They have more grown kids and grandkids than they can count.